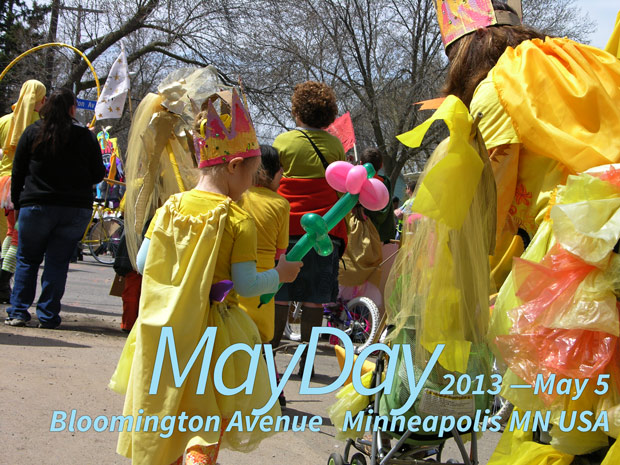 As anyone who has participated in a MayDay event on the first Sunday of May will testify, a daze often prevails over the following days. The players had practiced and played their parts. A whole parade of people built a story, with paper, paint, and high spirits, gathered with the storytellers of In the Heart of the Beast Puppet and Mask Theatre and wove down a city street, to perform in Powderhorn Park of South Minneapolis. It is a love-in in a manner of the 60s. A community theater with professional directions and guidance. It would be hard to ask for more.
My dilemma is editing down from the 1,100 plus images I shot that day. I have taken two runs at narrowing down the images and have 255 images at my Flickr account. So very much happens on MayDay, it is just so vibrant. I present a little photo essay of some of what happened. That is just the beginning. Next up I hope to show some of the sights in Powderhorn Park of MayDay 2013.
Part 2, MayDay Powderhorn Park moments
Part 3, MayDay 2013 people moments
Part 4, MayDay Parade Free Speech moments
The series above was taken at the very beginning of the Parade, right before their starting line.
Check around the Internet, particularly Flickr search for MayDay Minneapolis — MayDay is fabulous fun for photographers