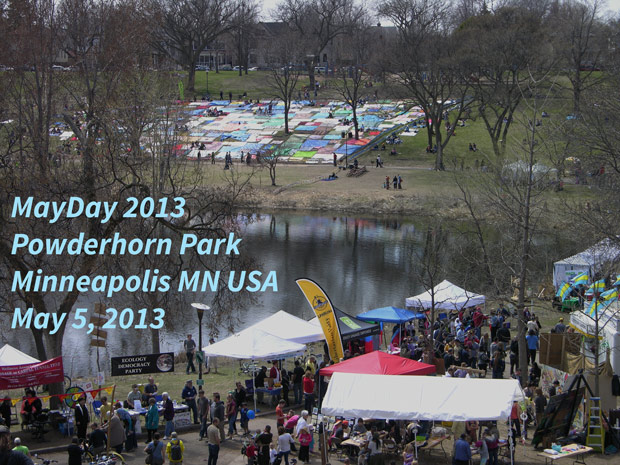 Powderhorn Park in South Minneapolis is the host location for MayDay.  The over-all-the-park, day-long event is referenced as the MayDay Festival. The In the Heart of the Beast Puppet and Mask Theatre had its beginnings in the neighborhood as the Powderhorn Puppet Theatre. Heart of the Beast (HOBT) assumes the responsibility, securing permits, insurance, use and security fees. A tremendous amount of time, talent, and energy is put into making the MayDay Ceremony, Parade, and Festival a healthy and welcoming event, which spreads throughout the neighborhood. Thousands of people make MayDay.

The MayDay Parade begins the days’ story-telling journey ten blocks to the North of Powderhorn Park. The Ceremony story is supported by the sections that form up the parade. The cast and puppet characters, according to their sections,  preform skits as they parade to the park. Bands, drummers, musicians accompany the story line dancing down the street. Frivolity, joy, and cheer flow from side to side, from spectators to paraders and back, up and down a urban city street on MayDay. In the park well wishing and sharing continue. Meanwhile all over the park, people were gathering and meeting, promoting their cause, hearing others concerns. Food booths were around and popular. Playing games, watching talent preform all around. The photos displayed here are from the end of the parade,  just as the paraders enter Powderhorn Park, or from the side of the staging area of the Ceremony.  Other photographers had better lenses, and positions, so I never bother trying to capture the Ceremony. But so much happens at MayDay that I miss most of the wonder.
Next I hope to portray people. —will be part 3
Part 1, At the Parade starting line moments
Part 3, MayDay 2013 people moments
Part 4, MayDay Parade Free Speech moments