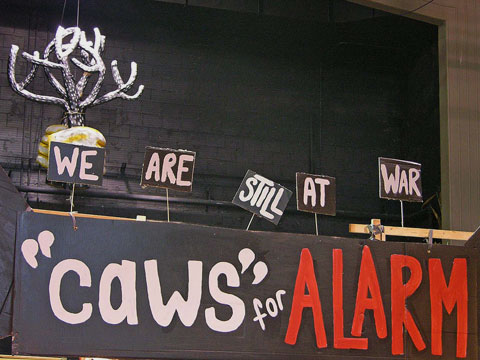 The MayDay adventure begins with community meetings where people discuss issues that are important to their lives. Staff artists of In the Heart of the Beast Puppet and Mask Theatre condense those themes unto storyboard banners, which are then hung in the theatre’s foyer. The story line is explained by one of the theatre’s staff, and you are encouraged to add to the storytelling by joining a section that resonates with you or excites your imagination. You may participate in many ways, there are ample methods to help MayDay, during the workshops, setting up, facilitating staff on MayDay, cleaning up and supporting financially. More information may be obtained at HOBT.org

It is a community thing. A colossal celebration culminating on the first Sunday in May at the MayDay Ceremony in Powderhorn Park, Minneapolis. Brought to you by people like you, come and join, come and help. The story is explained, so you may investigate which section you might join. Caws for ALARM – We are Still at War, we need to project our opposition to the war making apparatus, we need to voice the people’s call for peaceful resolutions

At the first workshop, the artists began their work in a flurry. Artistic chaos with a semblance of a storyline. It makes for a wonderful parade. Come help build MayDay at In the Heart of the Beast Puppet and Mask Theatre, 1500 East Lake Street, Minneapolis.