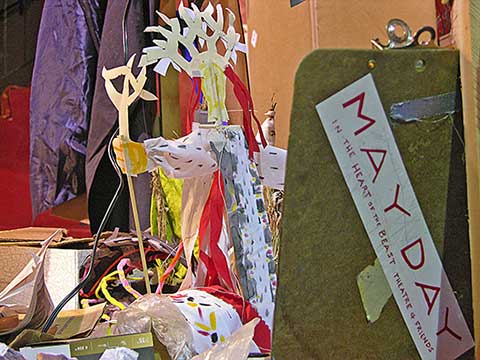 As I write this, about half of the MayDay 2011 Public Workshops have taken place. One Saturday, April 23 2011, session with two workshops; one at 9 a.m., and one at 1 p.m. remain. There will be workshops at 7 p.m. on the Tuesdays and Thursdays that remain in April.

Experience a MayDay workshop and know Magic is Alive. MayDay happens because people like yourself join together and dance a celebration of life. Just wear painting clothes, as wet paint and exuberant paint brushes bound around too.

All of the sections, except one, are seeking additional participants in the parade itself. The Ceremony section also welcomes performers and construction assistance. If you really want to preform you are encouraged to be in both the Parade and Ceremony. Talent is secondary to enthusiasm, but you should plan on attending some of the rehearsals in addition to workshops where you help build the MayDay theme visuals. The parade is a show. At Heart this is a Theatre production, but there are many non-preforming functions filled by volunteers also, see below.

They mean it when they state;

MayDay – In the Heart of the Beast Theatre & Friends

Come and unite with friends. The Pay Up! section are looking for some strong, athletic individuals to assume the three characters of the Greedy Corporations. These are big (and relatively heavy) depictions of rich power brokers. Be a powerful – good actor. Stilt walkers are also sought, to represent the scarecrows that the powerful use, to deter the equitable distribution of this earth’s abundant wealth. You can help in the paper mache application of the float’s Cornucopia or numerous eggs. There is plenty of material to cover with paper mache, and many surfaces to paint. Every section has tasks that you may assist with. All ages, all capabilities, can -and do participate. The only requirement is that you can be kind and accepting, to yourself and others. They do not expect perfection at the workshops, it just appears.

Below are some of the volunteer positions that generate magic on their own, independent of the spell cast by a theatre filled with creatives; (details at hobt.org) To volunteer for any of these activities please contact:
Margery Otto, Volunteer Coordinator
motto@hobt.org
or
612-721-2535 x14