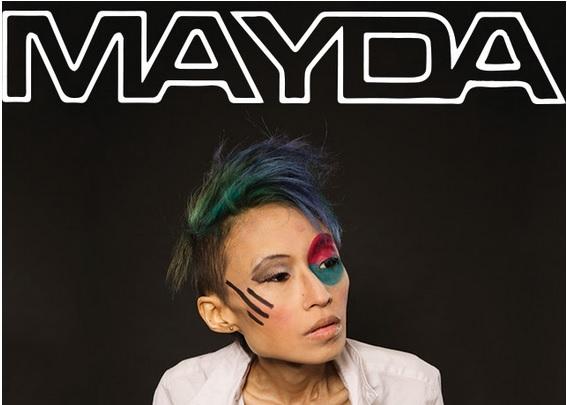 Home grown phenom, funk rocking vocalist-songsmith par excellence Mayda (www.imaydasong.com) has star power stamped all over her in block letters. She has, in fact, ever since her debut Stereotype was released in 2008, continuing to consistently impress withThe Interrogation, Tusks ‘N’ Fur and, now, Busy Signals. Her upcoming performance at the New Century Sessions series, smack dab in the middle of downtown Minneapolis, should go a respectable way toward sustaining momentum and establishing just the sort of next-step, high-profile traction she deserves around these parts.

A strong shot in the arm for her career has been her association with
producing legend Michael Bland (Prince, Soul Asylum), who in addition to lending his heavy rep, has an uncanny ear for showing Mayda’s sound off the greatest effect. Stunning numbers from her repertoire include the volcanic “Sylvia” with stark lyics, “A jet plane had a baby/ the baby was a little girl/ The plane crashed into a building and crushed the baby’s world/ She grew up in the safe zone avoiding any type of fight/ The plane crashed during the daytime, so she feels the most comfortable at night.” An incredible, almost addictive chorus. “Sylvia, Sylvia they heard you singing to the moon/ They heard you singing the blues/ Sylvia, Sylvia you’re making the news/ They’re talking about you/ They’re talking about you.” And there’s driving dance jam “Tsunami.” For her new material, Bland is still on hand, playing drums and co-producing on “Shadow Shake”. Producing though, it’s Chris Neviator and the artist, herself. Quality continues. Not the least of it being, “Verite”, a sweet departure in Motown-ish territory. “All That I Have” goes down the same stylistic road with an electro pop touch it along with some of Mayda’s most melodic singing to date. In short, Busy Signalsis a winner.

Bottom line, Mayda’s show will be one powerhouse throw-down. And won’t hurt her steadily rising profile one bit.