Yes, the Maya are in Minnesota. Specifically, at the new exhibit that just opened at the Science Museum of Minnesota.

You guys. This is an amazing exhibit. It’s comprehensive, fascinating, packed with interesting details and artifacts, and there are plenty of hands-on activities to entertain the young ones (or in my case, the 17- and 20-year-olds, who stopped and did quite a few of the activities too). 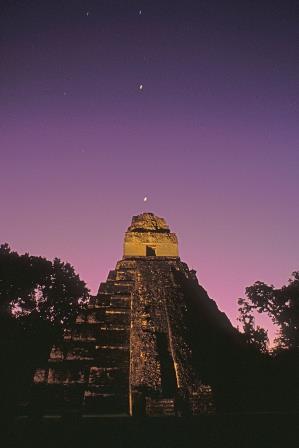 Pyramid at Tikal, Guatemala (Courtesy of the Science Museum)

I didn’t know that the ancient Maya had one of the first written languages that involved a complicated system of glyphs, which could represent a complete word or syllable. 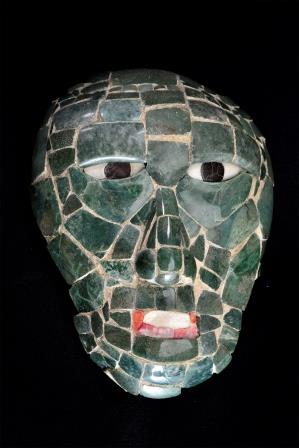 I didn’t know they were expert astronomers and timekeepers who developed highly accurate calendars that would predict solar eclipses and followed astronomical cycles to develop planting and harvesting schedules. 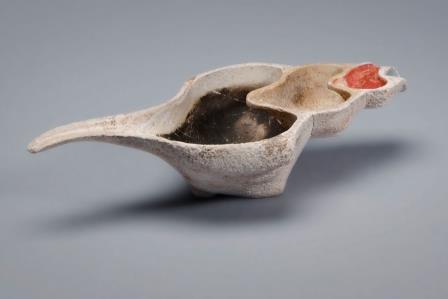 Look at that ancient inkwell–it was found on an archaeological dig with pigment still intact after hundreds and hundreds of years.

Color, design and pattern were important to the Maya. There are weavers today descended from the ancient Maya who still weave the patterns from their ancestors. 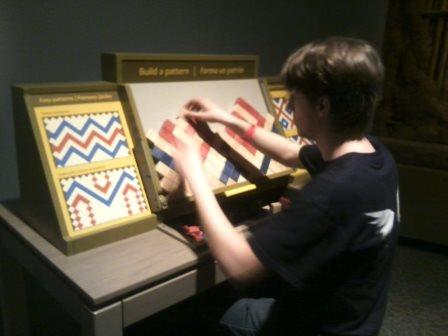 Teen 2 created his own patterns

The Maya were a diverse group–or rather, groups–of people with cities and villages of varying size and sophistication, each with its own set of rulers. Interestingly, they never developed a monetary system, but worked with bartered goods instead. 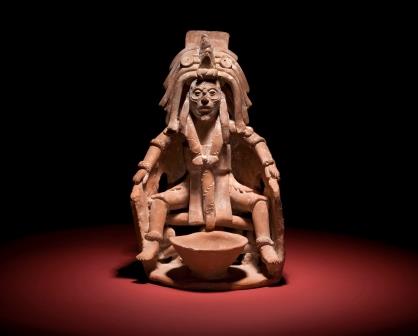 Bloodletting bowl (Courtesy of the SMM)

The Maya believed the universe had three layers: the heavens, the earth, and the underworld. Their religion was polytheistic, and among the many rituals to appease the various gods was human sacrifice and bloodletting. 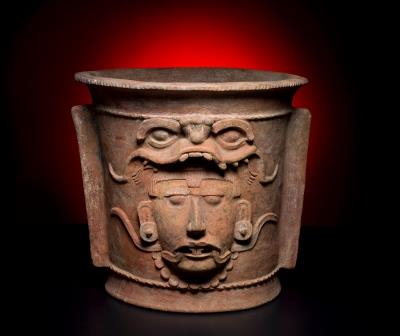 Incensario (Courtesy of the SMM)

The Maya, as a people, still exist, but not generally in such self-contained communities.

This exhibit is packed full of these types of facts and sights.The exhibition hall is divided by various themes that really teach visitors about a wide variety of aspects of Mayan life, death, and belief systems. Frankly, I think one visit is probably not enough.

At 15,000 square feet, it’s the largest Maya exhibit ever displayed in the U.S. It was developed by the Science Museum of Minnesota in conjunction with the Denver Museum of Nature and Science, Boston’s Museum of Science, and the San Diego Natural History Museum. It’s in Minnesota until January 5, when it will leave to tour other museums around the country.