Why do i not hibernate all year in a cave under the grandstand and only come out once in august, long enough to get my free pencils and reasonably-priced cider freezes?

Cold press (from a coffee place)

This was pretty regular. We went to the fair for breakfast (and then lunch and pre-dinner), so of course it involved coffee, but i wouldn’t say cold-pressed coffee is like an essential part of the fair experience or anything.

The Dough-sant (from French Meadow Bakery) 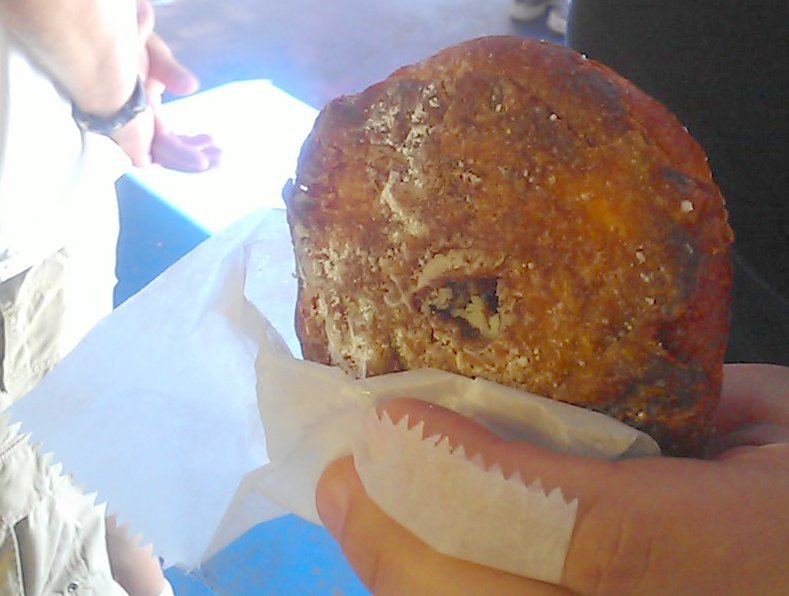 If you have internet access, you may have heard about the most important new food of 2013: the Cronut. The doughsant is one of many cronut knock-offs to have popped up in the months since, and as far as i can tell they’re all the same: croissant dough shaped into a donut, and deep fried. As if it needs saying, this is AN OBVIOUSLY GOOD IDEA, and the best $4 i’ve ever spent in my life. 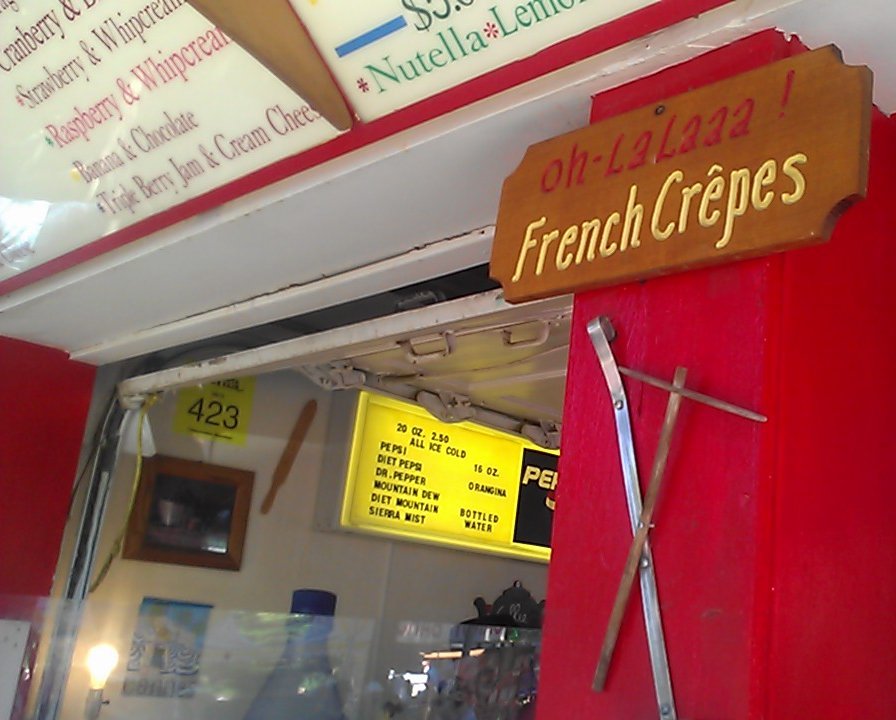 Cranberry and brie crêpe (from the French Crêperie)

This was more expensive than i wanted it to be, but also delicious, and the slices of brie were the amount you actually want, rather than the piddly little slivers you usually get so, it was worth it.

I do not tire of cheese curds.

Well, i didn’t eat this but Bub did, and says, “Acquired taste, but i like that it’s a seasonal and indigenous food source.” Translation: These will taste good to your brain, but not to your mouth.

Yum. Like the awesome anarchists we are, we furtively saved our cups for later re-use against clearly posted rules, but only got one extra return visit before the leftover milk in one cup made the dye on the cup nested inside of it start to run. Next year: milk cup holsters.

We each got one, and then we each went back for another later. I wish i’d gotten two for myself each time.

Fried olives (on a stick, from the fried fruit stand) 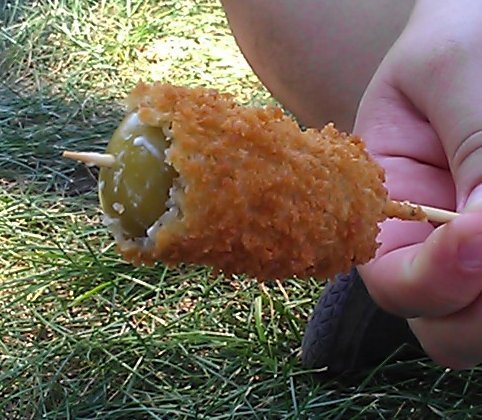 New to the fair this year; olives stuffed with cream cheese, skewered, battered and deep fried. These were tasty but pricey (even by fair standards), and i am not exaggerating at all when i say that it really seemed like they prepped and fried them one at a time, so it was a long wait. Aaaaand, i forgot to review last year’s experience before going and made the terrible mistake of foregoing fried pickles (again!) for these because in the interest of culinary diversity i decided i didn’t need two deep fried, briny, cream cheese-stuffed items. I was wrong, and i apologize to me.

This is where we really fucked up. We ended up with the last of a batch: too few legitimate fries, too many overly salted, greasy little fry stubs. Only minutes before, i had spotted half an order of garlic fries in the trash and, in a fit of insanity, didn’t swipe them. How different our lives could have been if i had, but all you can do is get back up, dust yourself off and commit to do better next time. 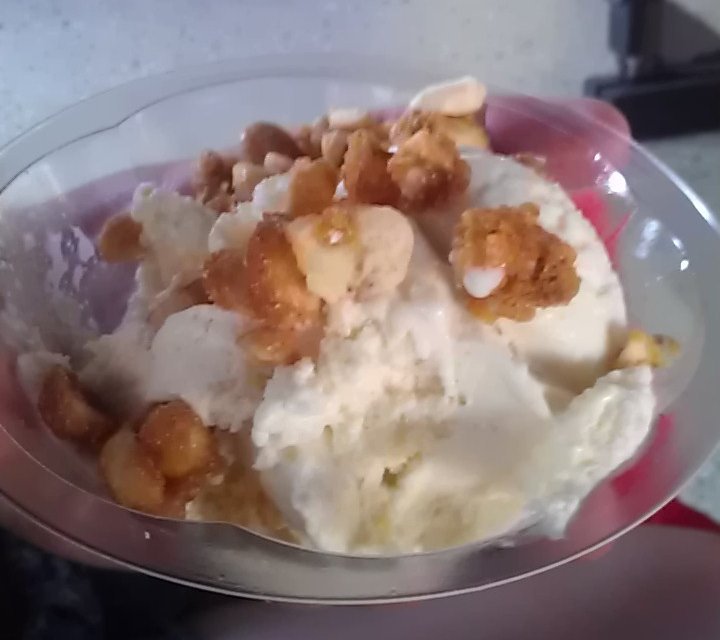 Tasted like a cold, slushy, liquified lemon bar, by which i mean to say: i loved it.

and in everything else:

The only animals we looked at this year were the babies. My preferred sky ride was closed for some reason, so we rode the ferris wheel instead. We also climbed the DNR fire-spotting tower. As usual, i enjoyed the seed art; my favorite piece: 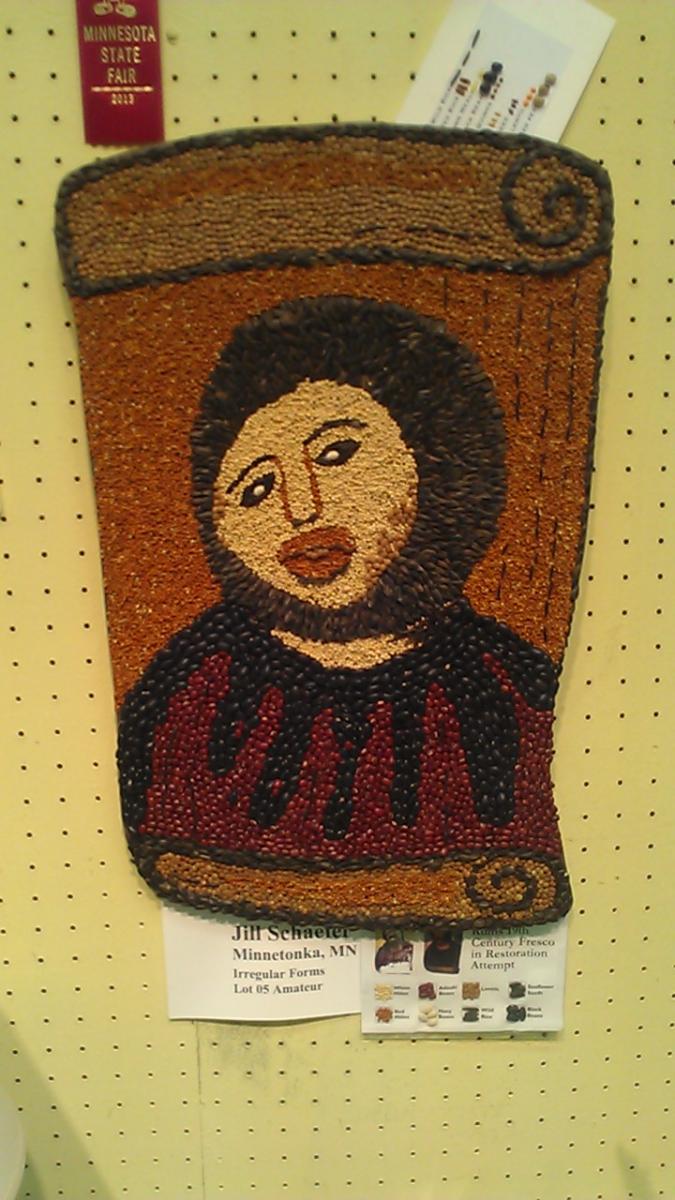 And i spent more time checking out the 4H projects than i normally do. Thankfully, because it meant i got to see this work of very important, hard-hitting scientific comparison: 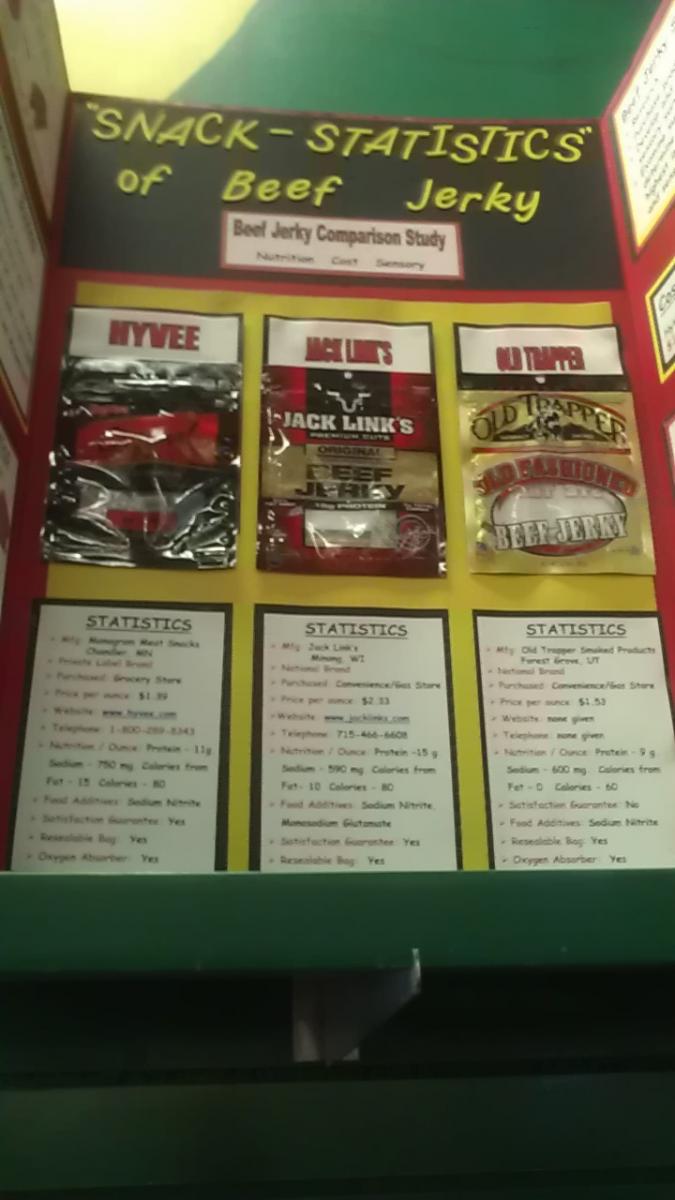 May the fair be with you.