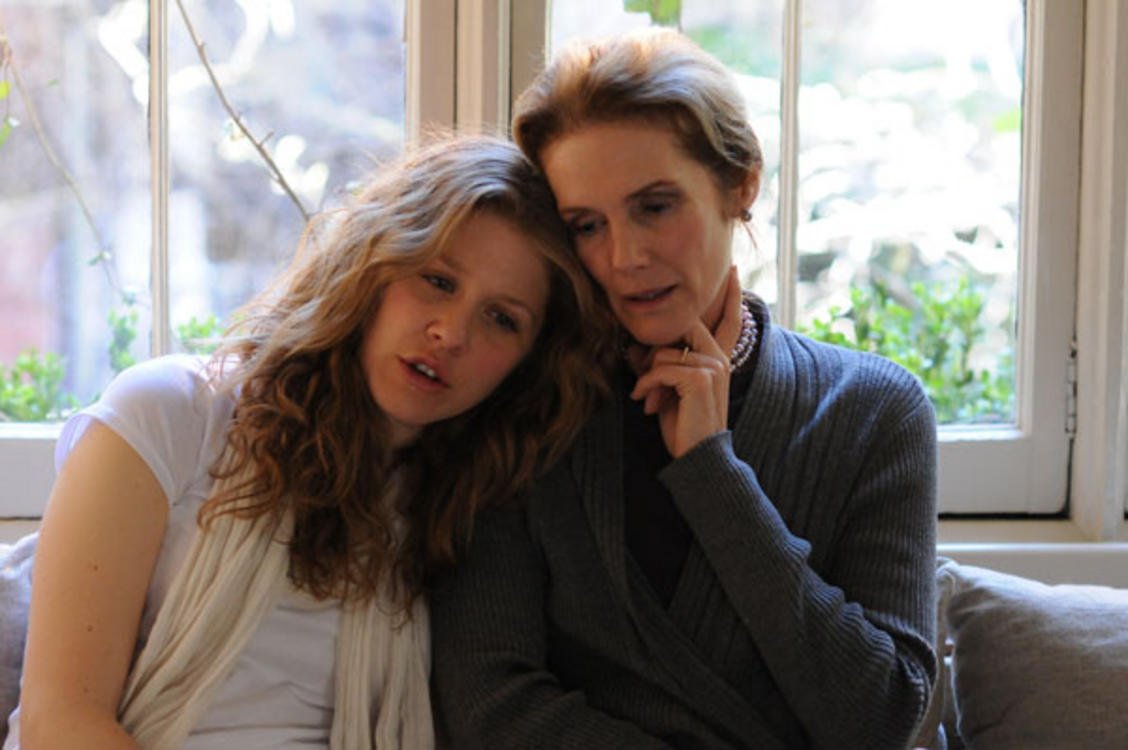 Translating theater to film is often even more tricky than adapting a book. The surface similarities of these time-based forms can make it appear that all you need to do is set a camera in front of the actors and let it play out. Of course, in practice, this is far from the truth. A “stagey” film is removed from everything that makes cinema work, and care should be taken to make there be a reason the play is on film and not the boards where it comes from. A Master Builder, based on the Henrik Ibsen play, is the latest effort to bridge the two forms.

In this film, like the original play, Halvard Solness (Wallace Shawn) is an architect who is the “greatest in the land” and is approaching the end of his life. He’s still working, but is bed-ridden and tended to by nurses at the open of the film. There’s a series of lifelong dramas which circle his bed with the characters they spring from. There’s Kaia (Emily Cass McDonnell) an assistant who is somewhat romantically entangled with. She’s also entangled romantically with his hopeful apprentice Ragnar (Jeff Biehl), a man who Halvard sees only as a man gifted with numbers but not drawing. Ragnar’s father Knut (Andre Gregory) is long-suffering colleague of Halvard. There’s Dr. Herdal (Larry Pine) a professional friend who has a slightly ambiguous relationship with Halvard’s wife Aline (Julie Hagerty). Aline is estranged from Halvard, something he blames on her depression rather than his own narcissism. Then, Hilde (Lisa Joyce) a vivacious twenty-something enters the home, draws him out of his hospital bed, and leads him into a series of confrontations with his past and the people closest to him. She’s come to make him fulfill a promise or bring a reckoning, it’s not completely clear.

Wallace Shawn and Andre Gregory are the minds behind My Dinner with Andre, a significant art film that only has the camera briefly leave the restaurant the two men are dining in. A Master Builder takes a similar approach, never presenting a scene outside of a handful of rooms in the house. There are moments in the beginning of the film when claustrophobia set in as I realized we might not be leaving the bed that Wallace is stuck in. As each character enters the room, the camera is given a new position and after Hilde enters the camera follows Wallace and Hilde’s movements through the house. More interestingly, many technical aspects also shift with Hilde . Hilde brings with her a cinematic style absent in the “realism” of the flatter video segments that fill the first half-hour. The aspect ratio of the film, the size of the frame, changes to the more dramatic 2.35:1 as it cuts to Hilde for the first time. The taller 1.85:1 aspect ration doesn’t return until Wallace climbs the “highest tower” he’s built, near the end of the film. This is formally clever, but also shows us that director Jonathan Demme (The Silence of the Lambs) hasn’t forgotten this is still a movie. This attention to cinematic style lifts the rest of the film from it’s stage origins.

The film is largely driven by dialogue, and that dialogue is reliant on performance to give it full life. There’s a significant amount of innuendo and implication in this translation (created by Shawn and Gregory themselves) and it is on the actors to play these minor chords. All of them are up to the task, and Joyce does a remarkable job drifting between innocent hero-worship and stalkerish obsession. Rather than a one-dimensional monster we can lock the door in front of, we want her to be on the screen as much as possible. We can see why Halvard asks her to stay in the house at the risk of encouraging her fantasy of taking over “his castle”.

Ibsen is often mentioned in the same breath as Shakespeare, and this adaptation offers this same level of depth and complexity. There’s a lot going in these two hours, and though it is not as heady as My Dinner with Andre, it’s clear Shawn and Gregory, by way of Demme and the cast, have a lot more than just the reconciliation of an old man on their minds. There’s nothing as hackneyed as a The Sixth Sense trick ending, but near the end of the film it becomes very clear that Hilde is luminous for more than her youthful view of the world.

This film was produced for under $1 million, but unlike most releases, it actually delivers well above its weight class. I don’t expect A Master Builder to be a runaway indie success story, but it will grow an audience and I imagine become an important part of Shawn and Gregory’s trilogy of theater. Rather than being merely a play that happens on film, Demme has used his many skills to create a film that is particularly cinematic. Halvard might appreciate that the filmmakers created their own high tower, yet somehow managed to not fall off of it. Happily, we can all enjoy the view.

Photo by Declan Quinn / Courtesy of The Ibsen Project LLC

Photo by Declan Quinn / Courtesy of The Ibsen Project LLC