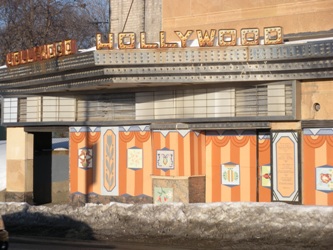 When Maryllyn McKevitt got her first job working at the Hollywood Theater in Northeast Minneapolis, it was around 1949, and the theater had just been remodeled.

The Hollywood, built in 1935 by the architectural firm Liebenberg and Kaplan, was one of the finest examples of “Zigzag” Art Deco Style of its day with both interior and exterior art deco features.

The lobby floors once displayed a black, green and gold terrazzo pattern. The lobby featured a fountain that was backed by a mirror. The lower level, accessed by a curved staircase, led to the restrooms and another lobby for gathering and visiting.

“It was a lovely, lovely place,” McKevitt recalled, “Compared to other neighborhood theaters, the Hollywood surpassed them all.”

“It was quite a luxurious place.”

When she started, McKevitt was only 14 years old and sold candy at the concession stand. She told the management she was 16 so she would get the job.

McKevitt described the years she worked at the Hollywood as a wonderful time to be a teenager.

“It was a home away from home for me. I got 50 cents an hour plus two free tickets. You worked almost every night.”

According to McKevitt in those days, people had money to spend and going to the movies didn’t cost a lot.

“It was a main thing to do for entertainment and a place to go on a date.

Admission was 10 cents for children. Popcorn cost either a nickel or a dime.

It was a safe for little kids to come and it was always packed on Saturday,” she said.

Everything was shown there:  musicals, dramas, cowboy movies, and mysteries.  You also got news reels that showed the news from across the country.  Saturday matinees featured serials for kids.

“When you went up to the balcony, that is where couples when to smooch,” she added.

She remembered how the guys would often sit out on the retaining wall outside after the show and talk.

“I can still see the men putting up the letters on the marquee. I think it was on a Wednesday night when they changed the letters.”

“Everything was kept up. It was always very clean. Nobody slacked. The guys wore uniforms, the kind with the stripe down the side.”

In November 2009, McKevitt’s son, Patrick, heard about the sale of theater seats from the Hollywood Theater by the City of Minneapolis Department of Community Planning and Economic Development, and knew he had to buy one for his mother for a Christmas present.

McKevitt still doesn’t know how her son found out about the sale, since he doesn’t live in the Northeast area, but she knows that this was the perfect gift for her.

McKevitt told her son that she didn’t want him to change the seat in any way.

“I want it grubby but clean,” she said.

She plans on building a base for it so she can use it as a chair for her living room. Some of McKevitt’s friends cannot sit in the “comfy chairs,” and she said, “Wouldn’t it be fun to sit in a theater seat?”

And why not, she thought, this was a part of her life that was a very happy part.

“It was a carefree time and all I had to do was get my school work done and get to work,” she said.

She hopes that the future ensures a new use for the Hollywood and wondered if it could be a place for the young kids to go like when she was young.

“They need a safe place to be. The bones of that place could give you that with all the love that was there,” she said.