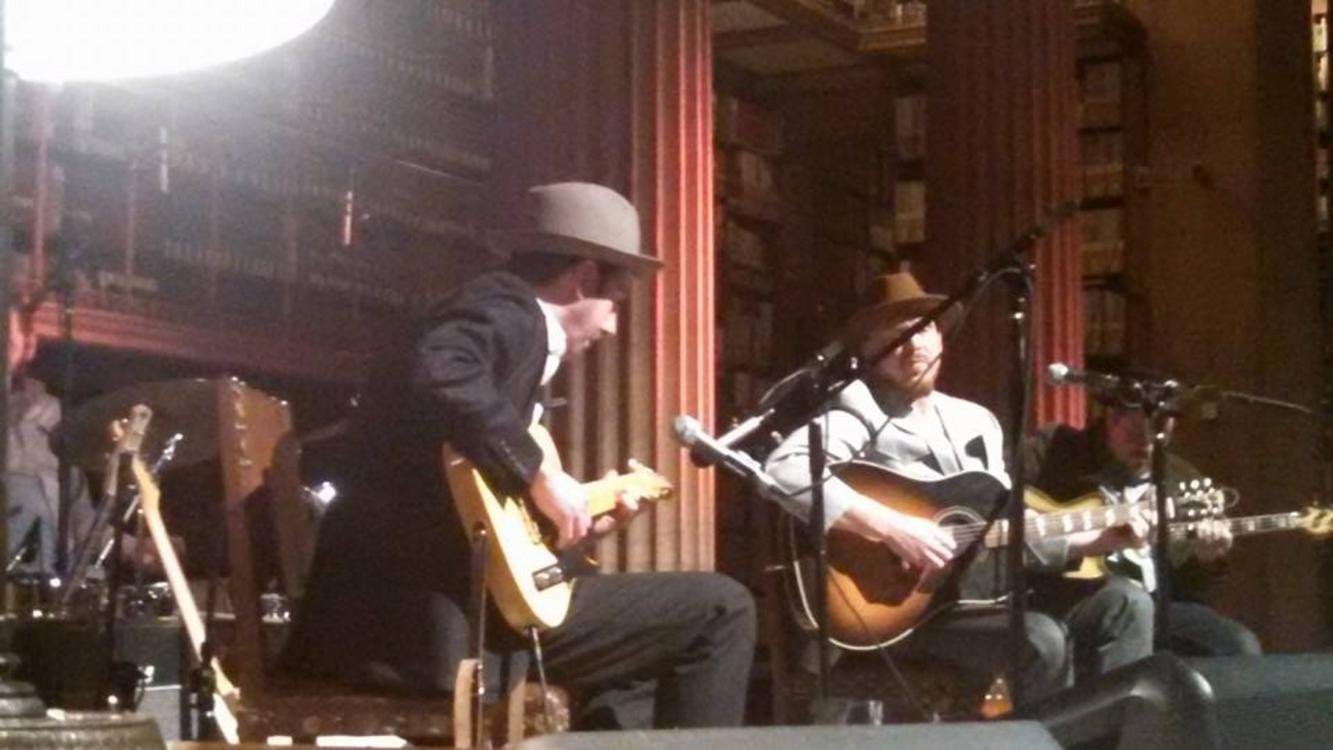 Every third Thursday, the James J Hill Library leaves their shush at the door and welcomes Real Phonic Radio. In January, the door opened to sweet sounds of Martha Scanlan balanced nicely with a lot of much lower voices throughout the night.

This is the second time Scanlan has played Real Phonic Radio. Last time she played with Amy Helm, this time with Dolorean’s Jon Neufeld. The music was softer this time. Scanlan has a very sweet voice – gentle and warbling at times like a songbird. Neufeld has a surprising low speaking voice, as he sang with Scanlan it was huskier, an aspirated balance to Scanlan’s whisper.

Although they played songs by Johnny Horton and Willie Nelson and Waylon Jennings, it’s Scanlan’s own work that best suits her voice. She told the story of a cowboy friend who was sick. He being 80 years old and under the weather, she called his doctor and arranged a visit to the office in Billings three hours away. He called her friend and gave him 20 minutes, in which time he showered, shaved and dressed for a trip to town. That image informs an understanding of a line (putting on the best red shirt and best pair of jeans) from Abilene, the song she played next, demonstrating the depth of storytelling in her songs.

Scanlan lives in Montana now but is originally from Minnesota. I had to look that up when my 10-year-old date noted that she liked to listen to Scanlan’s Minnesota accent. And I always like to note a Minnesota connection!

Another treat was listening to Michael Rossetto play with David Huckfelt, Mike Lewis and JT Bates. Lots of strings and the drums. Most of the set was — as I think Rossetto put it –- music from the wheelhouse of a banjo. (He plays the banjo – and more – but started with the banjo.) They played a musical branch from Shady Grove, they played some Los Lobos, but whatever they played they made it their own with great harmony. While there was a sweetness to Scanlan there were roving lower tones at play with these guys. They ended with a song of their own construction that was a tribute to Chet Atkins and Erik Koskinen. The song moved from one great country-sounding riff to the next, which made the song so familiar yet new. The song ended with a custom rendition of Koskinen’s music.

The set started with Rossetto alone on banjo. He played the banjo in a classical style I have never heard before with a banjo. It sounded a bit like a Spanish guitar. It elevated the banjo to a new level. Much as I liked the rest of the set, I really enjoyed that breath of something entirely new!

Also Rossetto astutely compared Real Phonic Radio to Austin City Limits – saying Real Phonic is the closest thing we have to Austin City Limits in the Cities. He’s right. He mentioned listening to the show as a kid in his parents’ house. I can remember doing the same – I think that’s part of why I enjoy bringing my 10 year old to the show every month. A lot of the time live music is not a family affair – and I like that – but it’s also really nice to have a venue where you can introduce the next generation to live music.

This month’s poetry interlude was Ernest Hemingway’s A Movable Feast read by Real Phonic emcee, Thom Middlebrook, in the shadow of the Charlie Hebdo incident in Paris. (Middlebrook has spent considerable time in Paris.) I believe the excerpt he read was from “The Pilot Fish and the Rich.” I’m not well read in Hemingway, but as I recall, some of the sentiment recognized that physical harm was less painful that emotional distress, which makes sense in light of the “Je suis Charlie” movement.

Erik Koskinen and the Real Phonic opened and closed the show as always. Koskinen was sporting a voice much lower than his usual, due to a cold he reported. But it was impressive to hear him play and unpack some songs that haven’t seen the light of day for a while and require less of the vocal chords. While I don’t wish anyone bad health, I was happy to hear the Good Times are Really Gone.