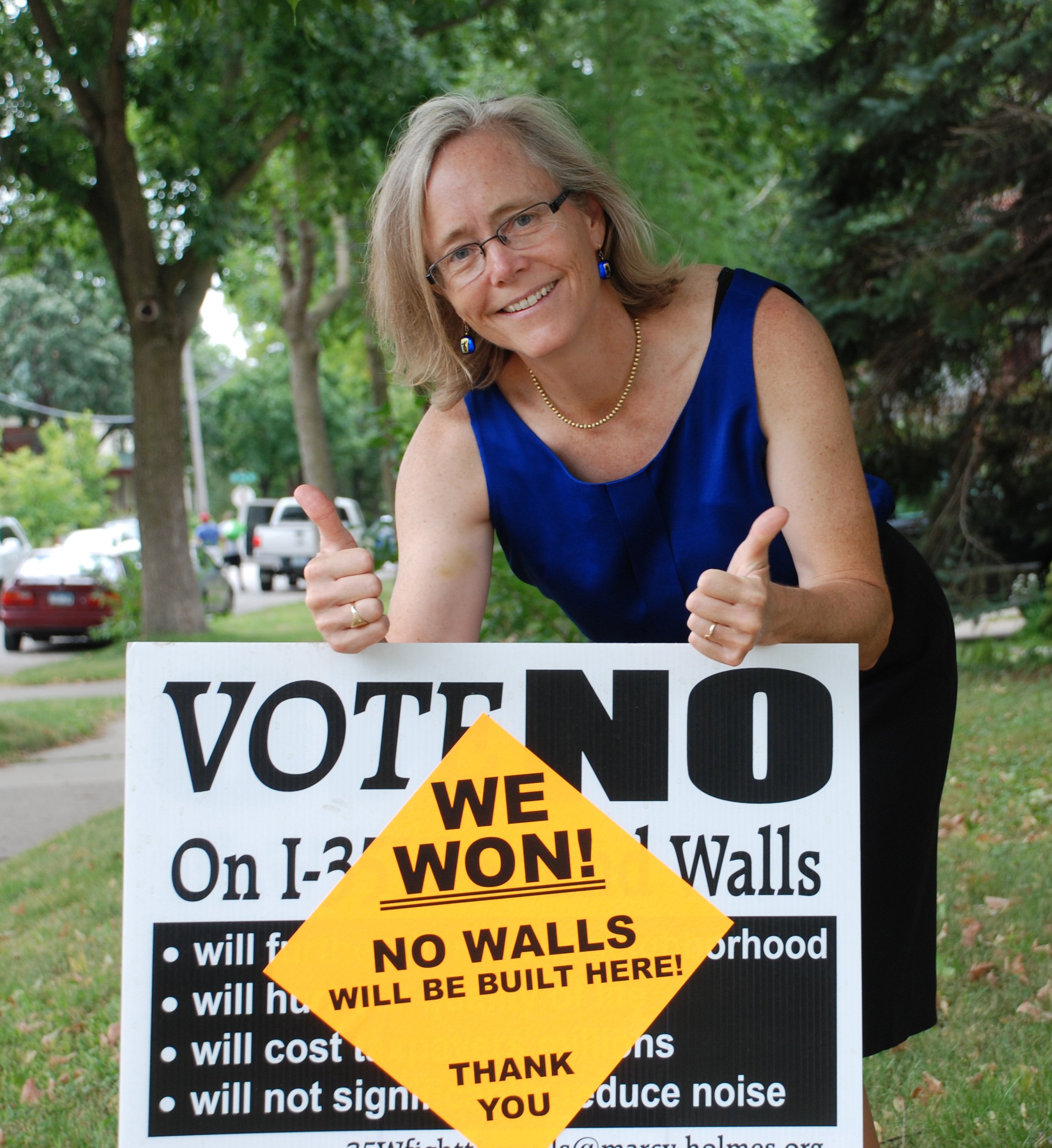 Marcy-Holmes President Cordelia Pierson and other MHNA activists added a label to their signs to demonstrate that neighborhood organizing can make a difference. Photo by Bill Huntzicker.

Controversial sound barrier walls will not be built along I-35W in the Southeast Como and Marcy-Holmes neighborhoods—after an election process that would make Rube Goldberg cringe.

The 20-foot sound walls had been proposed as part of a construction project that will add two lanes to I-35W from Fourth Street South across the Mississippi River to Johnson Street Northeast, passing through sections of the Marcy-Holmes, Southeast Como, and Beltrami neighborhoods.

State and federal rules require sound walls for projects of this magnitude but allow the state to create a voting process for neighbors to reject or approve them.

Neighborhood leaders say the system was weighted in favor of building sound walls, making it difficult to reject them.

They encouraged word-of-mouth contacts because only certain residents and landlords could vote and votes were weighted by occupancy and a transportation department projection of how much the property would benefit from a sound reduction.

Vacant properties that did not return the mail ballots would count as “yes” votes. “That must be a bureaucratic mistake that needs to be corrected,” Pierson said.

Pierson said she’d like to build on the momentum that MHNA has gained from organizing to oppose the sound walls.

“It’s always easier to get people out to oppose something, but building on something positive is more difficult,” she said.

She suggested that an additional bridge across the interstate at Fifth Street or Sixth Street Southeast would reconnect the neighborhood divided by the interstate highway in the late 1960s.

The sound walls would have visually re-enforced that division, Pierson said.

Marcy-Holmes had distributed black-and-white lawn signs that were seen throughout the neighborhood saying: “VOTE NO/ on I-35W Sound Walls/ will further divide our neighborhood/ will hurt our quality of life/ will cost taxpayers millions/ will not significantly reduce noise.”

They began putting bright yellow diamonds over the signs proclaiming victory: “WE WON! No walls will be built here/ Thank you.”

The project will also reconfigure the Johnson Street, New Brighton, and Stinson Boulevard exits on the north end of the expansion.

Both Hennepin County Commissioner Peter McLaughlin and Minneapolis City Council Member Diane Hofstede said they were “blind-sided” when informed of the required $3 million wall after they had already approved a $13.4 million highway project involving the city, county, and state governments.

“We had committed to keep that vote open until we receive 50 percent one way or other,” said Scott Pedersen, project manager for MnDOT. “Subsequent to that, we have received enough to close the vote on Friday the 30th. All three walls in Marcy-Holmes have received enough votes to not be built.”

Officials from the Minnesota Department of Transportation, Hennepin County, and the City of Minneapolis met with representatives of the three neighborhoods in August to explain the mail-in voting process on the sound walls.

They expressed surprise at the strength of vocal opposition to the sound walls from about 50 people at the Marcy-Holmes meeting on July 23.

“We think the proposed noise wall would hurt the quality of life in the neighborhood,” Pierson said at the meeting. “Many of us have sweat equity in the plantings along that corridor. They would be torn out when that wall is put in.” Greener cities and neighborhoods stand out, she said.

Owners of two homes on the historic register said their houses could be damaged by construction but they were not allowed to vote.

“This was a huge effort that brought our neighborhood together,” said an email from the MNHA land-use committee announcing their victory. “Huge thanks go out to MHNA board members, resident volunteers, property owners, and MHNA staff. We also thank our elected officials and staff at MNDOT and Hennepin County.”

Voting closed Friday, August 30, and each section of the wall was voted separately using a complex point system, said Pedersen said. Ballots that were not returned were counted as favoring the wall.

Here are the results he shared as of August 27:

Walls K and L had not been determined because he had not yet a 51 percent return from the Beltrami neighborhood, Pedersen said. (Results are updated each Friday, and may be seen here.)

Construction on the highway expansion could begin in August 2014.

The points assessed voters related to the amount of project noise change, the number of living units on a site and other factors.

MnDOT has a website for frequently asked questions about the project, including voting on the sound wall.

One explanation of the process says those who would benefit from the sound walls get to vote. “A benefited receptor is offered the opportunity to cast a vote regarding a potential noise barrier. As part of deciding how to cast their vote, a benefited receptor might weigh their quality of life with respect to noise impacts against other impacts to their property and quality of life (vegetation, visual, etc).”

About the process to determine impacts, MnDOT says: “In the case of the noise walls, SEE [Social, Environmental and Economic] impacts directly associated with construction of a noise barrier will be shared with the benefited receptors to assist in an informed vote being cast. If the construction of feasible and reasonable mitigation for noise impacts would result in impacts to resources that have specific protection under federal law (e.g. historic properties, Section 4(f) properties, wetlands), then impact(s) to those resources are compared to the obligation to provide feasible and reasonable noise mitigation. This comparison, this balancing act, is a product of coordination between the lead federal agency, the project proposer, and entities that have designated role in the process of evaluating impacts to those protected resources.”