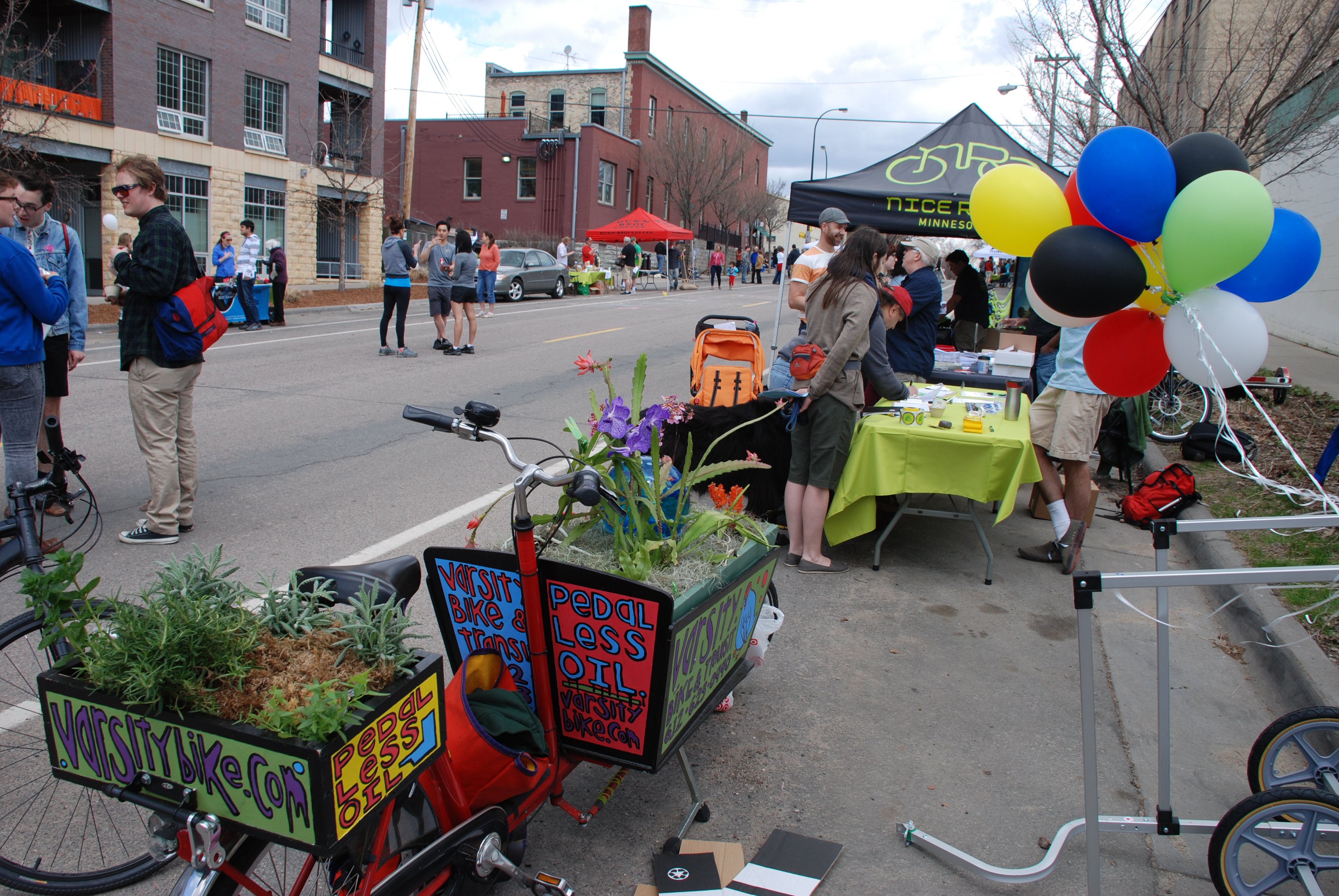 Some Southeast Minneapolis residents celebrated spring by looking to the future with more emphasis on bicycles and to the past with a new downloadable tour and the reissue of a Marcy-Holmes Neighborhood history.

The tour, narrated by neighborhood historian Penny A. Petersen and more than 25 other residents and artists, is available in both text and audio form as a downloadable app for iPhones and others. At the website, click in the upper left corner for the apps and the tour called “Marcy-Holmes History: Hiding in Plain Sight.” The apps are free and the written text can be viewed on the website.

The tour is based on Petersen’s book, Hiding in Plain Sight, a neighborhood history emphasizing historic homes that are “hiding in plain sight” throughout Marcy-Holmes Neighborhood, especially the historic district along Fifth Street Southeast.

The book, published about 15 years ago by the Marcy-Holmes Neighborhood Association, has just been reprinted. It will be available from Lund’s grocery at Central and University avenues and the MHNA office for $19.95.

MHNA members celebrated the book and the app at a May 3 release party on Sixth Avenue between Main Street and University Avenue. The event was also designed to celebrate the Sixth Avenue Greenway with its native plants and sculptures of historic neighborhood buildings.

Residents were joined by sculptor Aldo Moroni, who designed the sculptures on brick pedestals that line Sixth Avenue as a transition between the neighborhood and the Stone Arch Bridge with walking and bicycle access to the Mississippi River.

Bike advocates, including the Varsity Bike Shop and Nice Ride Minnesota, handed out literature and maps of Minneapolis bikeways. Treats were given out from the adjacent Café Alma and Dunn Bros Coffee.

MHNA President Cordelia Pierson and director Melissa Bean sold books and encouraged residents to comment on the new Marcy-Holmes master plan and to enjoy the nearby riverfront.

They said that all comments received during the public comment period will be incorporated into the public record and taken into account when the final plan is completed.

The plan can be viewed at the Southeast Library in Dinkytown or the Minneapolis Department of Community Planning & Economic Development office in the Crown Roller Mill, 105 Fifth Ave. S. #200, just across the Stone Arch Bridge on the downtown side.

Comments can be sent in writing by email to planner Haila Maze at Haila.Maze@minneapolismn.gov or by mail to CPED at the Crown Roller Mill, 105 Fifth Ave. S., #200, Minneapolis, MN 55401.

Marcy-Holmes neighbors celebrated the Sixth Avenue Greenway and encouraged more bicycle use on May 3.

Neighborhood historian Penny A. Petersen holds up a copy of her newly reprinted book on Marcy-Holmes historic buildings.

Marcy-Holmes director Melissa Bean handed out neighborhood and riverfront materials at the May 3 festival.

A sign directed welcomed visitors and reminded them where to find more information.