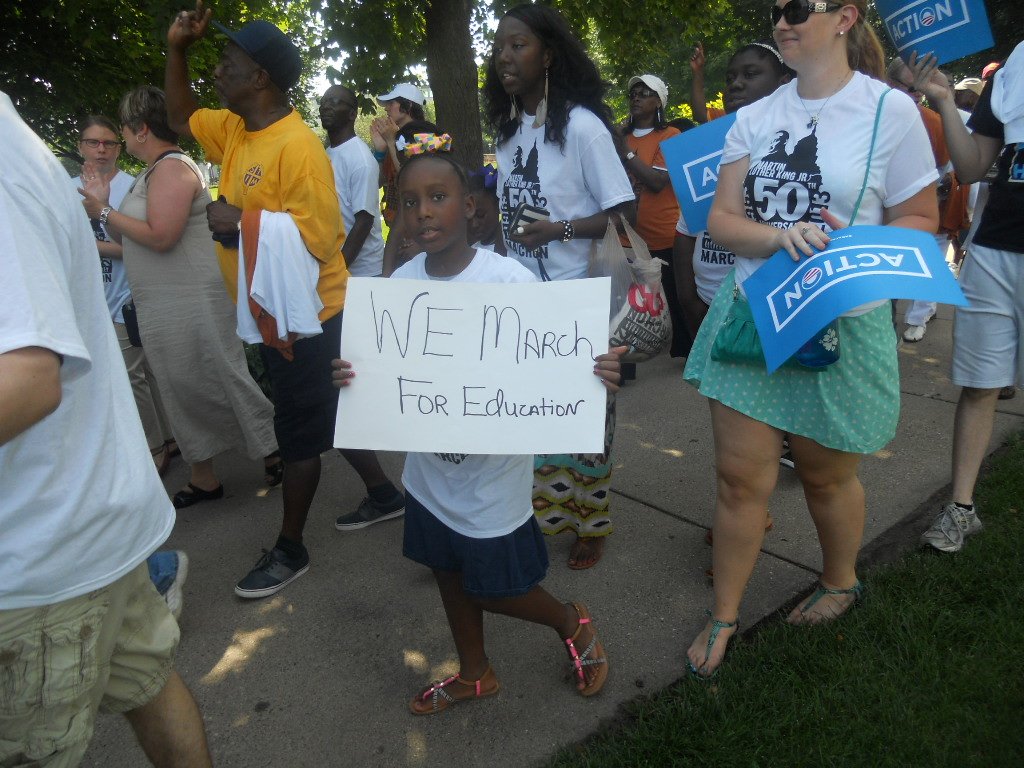 Many children attended the march on August 28th

Community leaders gathered in St. Paul on Wednesday, August 28, to commemorate the fiftieth anniversary of the March on Washington. Like the original march, a combination of organized labor, community leaders, and representatives of the faith community put this one on.

At Frank Boyd Park just behind the St. Paul Cathedral, a small but enthusiastic group gathered in the mid-day heat. March organizer Harrison Bullard, of the Service Employees International Union (SEIU), invoked the memory of Frank Boyd, the namesake of the park, saying he was a porter and a “member of one of the first black unions,” as well as a member of the NAACP. Moments later, the crowd began singing such songs as “Victory is Mine,” as they moved towards the Capitol building.

Once there, many marchers settled in to some welcome shade and listened to labor and community leaders give speeches. Pastor Brian Herron of Minneapolis began by telling the crowd that fifty years after the March on Washington, the “dream has not been realized.” Herron then made the point that there are “more people incarcerated now than were enslaved in the 1800’s.” Finally, he called for the “dream” to transform our society from a “theoretical to literal democracy.”

This theme of transformation and continuation of the goals of the original march resonated throughout the afternoon. Maxine Maxon, who is the president of the Minnesota chapter of Afram, the caucus within SEIU for “people of African descent,” urged the crowd to get involved in local politics, saying, “Please, let me see my people in elections.”

Congressman Keith Ellison continued by emphasizing the role labor played in the first March on Washington, noting that it was the United Auto Workers who “funded the March for Jobs and Freedom” back in 1963. Ellison said that, while progress has been made since that time, Americans are now seeing a “slippage of our economic rights,” which Ellison said amounts to an “assault on Civil Rights.”

Many in attendance seemed to agree with Ellison when he said “because people have put in for you,” in terms of the push for racial, social, and economic justice, “you have to give back.” Yankuba Fadera, who was at the march with his young daughter, referred to Dr. Martin Luther King’s 1963 appearance, and said he was there to “celebrate the work that has been done.”

Fadera also said that the “world would be changed if reasonable people would work together.” Near the end of the event, spoken word artist Black Pearl took the stage, saying, “This is not a dream but a wake-up,” inspiring many in the crowd to nod and hum in agreement.

Justice for the NW Suburbs

Smiling through the Heat

Yankuba Fadera and his daughter