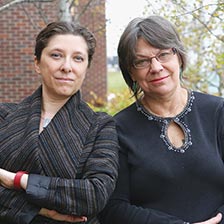 Market research isn’t new to the work of business – except when it becomes a strategy for disrupting and dismantling the business of sex trafficking.

Alexandra Pierce, president of Othayonih Research, and Lauren Martin, of the University of Minnesota, are the principal investigators behind a groundbreaking report released in September. “Mapping the Market for Sex with Trafficked Minor Girls in Minneapolis: Structures, Functions, and Patterns” makes that kind of strategy possible.

The project examined where girls, pimps and customers live, where recruitment occurs and where “transactions” take place. It also mapped the “who” and “how” of the market. Pierce, who has a doctorate in sociology, and Martin, who has a doctorate in anthropology, believe it’s a first-of-its-kind look at a single city, using a combination of law enforcement and community data sources.

“It’s comprehensive in a new way,” says Martin, research director at the university’s Urban Research and Outreach-Engagement Center. The researchers not only gathered a great deal of information; they “connected the dots,” combining multiple sources of data with a market-based approach that allows stakeholders to see the system behind the exploitation of kids.

When asked whether anything surprised her, Martin says, “I expected there would be violence.

“I was not expecting to find that violence is strategically deployed as part of a business operation.”

The report says that trafficking operations “employ systematic psychological, physical and sexual brutality to develop a ‘product,’ which is girls to sell.” Pierce knows about that brutality as both a researcher and a survivor.

“I had a very brutal pimp,” she says.

What kept her in that system for 14 years was primarily the fear of losing her son. Pierce has worked to assist prostituted women and girls since 1997, but only in recent years made her survivor status public. First, she wanted to build her research credentials and credibility.

“But my passion, the reason I became a sociologist, was to stop the crime,” she adds.

Both researchers hope the project will inform the efforts of law enforcement, policymakers and legislators. Minnesota already has made considerable progress, they note, including the Safe Harbor legislation and “No Wrong Door” initiative, which is designed to help juvenile victims find housing and other help. Attitudes have been changing among policymakers, police and the public.

The research found that most trafficking reports to Minneapolis police were third-party reports – meaning “someone saw something and called it in,” Pierce says. “That’s wonderful.” She credits the Women’s Foundation of Minnesota’s “MN Girls Are Not for Sale” campaign, among others, for impacting public awareness and attitudes.

“When society says, ‘No more,’ that’s when things change,” Pierce says. “And that’s happening in Minnesota.”