At the height of the recession, Minnesota’s unemployment peaked at 9% in March 2009, according to the Bureau of Labor Statistics (BLS). Since then, Minnesota has rebounded significantly, with an April 2012 rate of 5.2% (non-seasonally adjusted data was used for consistency and comparison with county level data).

Since January 2009, every county has seen unemployment reductions, and the overall state economy is now approaching pre-recession unemployment levels. However, not all areas have rebounded equally, as the map below indicates. 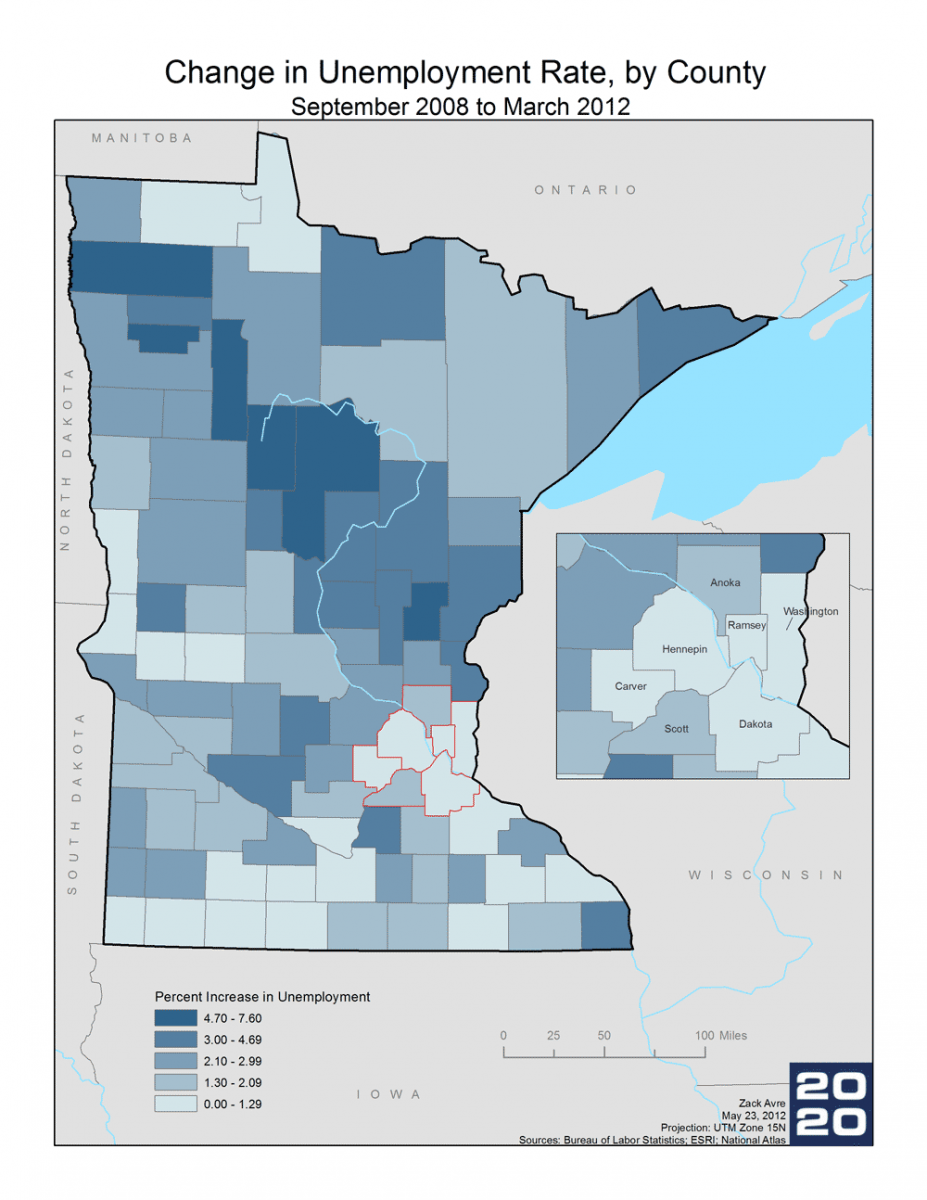 Counties with the most successful recoveries, shaded in light blue, dominate the southern half of the state. From the I-90 corridor to the majority of the communities lying along Highways 52 and 169, the southeastern and southwestern parts of the state have fared better than the rest of the state during and coming out of the recession, most likely due to the strong food and health service industries in the region.

Many of these counties, which include cities like Rochester, Mankato, Worthington, and Winona, enjoyed unemployment rates hovering around 4% in September 2008 and now have seen their levels return to around 5%, below the state and national rates.

As the inset highlights, the seven-county metro seems to be riding out the recession more smoothly than its neighbors, especially those to the north. In fact, Hennepin and Ramsey Counties, whose net unemployment rates are now only 0.2% and 0.6% higher than in 2008 respectively, have proved to be two of Minnesota’s most resilient counties over the past three and half years.

Unlike the seven-county metro area counties, which have all returned to within 1.5% of their pre-recession unemployment rates, rural north-central and north-western Minnesota, shaded in dark blue, continue to feel the downturn’s impact. Areas, such as Red Lake, Hubbard, and Marshall, tend to have more limited accessibility than their southern counterparts and are more sparsely populated. In addition, areas like Clearwater County, whose 15.5% March 2012 unemployment rate remains 7.6% over its September 2008 rate of 7.9%,  depend more heavily on the struggling forestry industry.

That being said, looking within this three and a half year span suggests that things are improving across the state. Since January 2011, 83 of the 87 counties have seen unemployment levels drop, with the remaining four sustaining increases under 0.5%. Moreover, recent analysis by forecasting firm IHS Insight Global, as seen in the New York Times, predicts that Minnesota will regain peak employment by the end of next year.

While rates may fluctuate from month to month and though disparity remains among Minnesota’s counties, the state and its counties look to be heading in the right direction.