An average Minnesotan’s commute time is about 22 minutes, consistent with the 23.7-minute national average. These figures are for all forms of transportation, including transit and non-motorized travel. Roughly 75% of Minnesotans drive by themselves to work, which according to the Census Bureau, matches national numbers. Since the 1960 Census—the first that collected commuting data—private miles have steadily increased. We all know it is time for to reverse this trend.

Take a look at the maps below, which show average commute times by county, with a breakdown of the state’s 4 largest metro areas and their public transit usage. 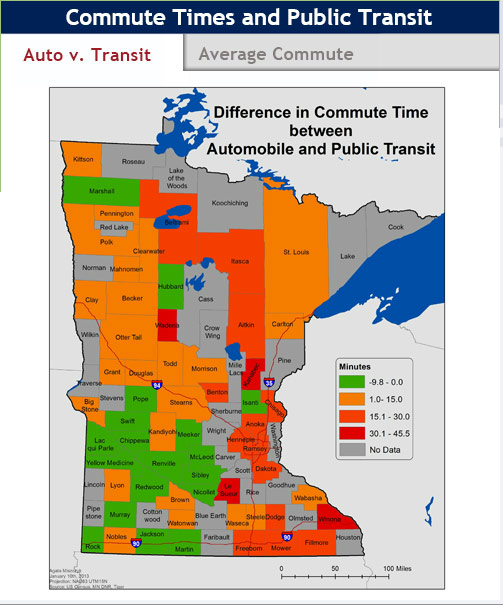 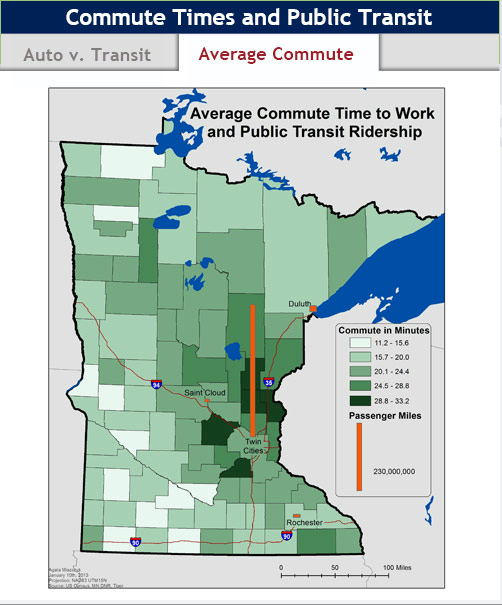 Public transit, however, does have the ability to decrease commute times. On the second map, green counties represent areas where people reported that using public transit (not including taxi cabs) is actually faster than using a car. What is interesting about this map, is that the green counties are actually less densely populated than urbanized counties, demonstrating public transit isn’t just a big city thing. Public transit can, and does, work in smaller cities and towns.

There has been a nationwide movement that is seeing smaller cities expand their public transit infrastructure. In 2012, Bloomington, Indiana – a city of 81,000 people – started exploring the idea of a Bus Rapid Transit system, stating it’s not just for big cities anymore. Other less densely populated areas already have this infrastructure in place.

The Community Transportation Association of America’s executive director once stated that rural transportation networks “are the transportation solution for the next century”. Instead of just focusing on large scale public transit projects in big cities, Minnesota may want to look into expanding transit infrastructure in some of its smaller communities. And by doing so, perhaps shave off a few minutes of that pesky commute time.