What do you think is the second most common commuting option?  Here’s a hint: it’s usually not this dry.

About 9% of Twin Cities metro area commuters carpool to work, just under the 10% national average.

Carpooling has major benefits. Environmental friendliness aside, carpooling can often times be much faster than driving solo, specifically in high traffic areas. Many major metro area thoroughfares have High-Occupancy Vehicle (HOV) lanes – simply known as carpool lanes. The major lanes in the Twin Cities are on I-35 and 394. During regular traffic conditions these lanes do not provide much incentive, however, a Minnesota Department of Transportation study showed that during congestion HOV lanes move more people per lane that general lanes. Besides full lanes, the Twin Cities are also full of HOV ramp meter bypasses. Why wait for the light to turn green when you can zip past everyone on the bypass?

Besides saving time, carpooling can also save money on gas and parking. Minneapolis and St. Paul downtowns both offer several free parking lots for registered carpools. Our metro area is not uncommon in offering these incentives for carpoolers; numerous large cities throughout the United States provide added benefits to those who participate in rideshare programs.

According to the MNDOT report, there are several different types of ridesharing. The most popular is household carpooling – where family members travel together to similar destinations – however office carpooling and organized carpooling is becoming more and more popular. Metro Transit’s 160 free park-and-ride lots provide carpooling workers a place to connect prior to hitting the densest part of their commute. 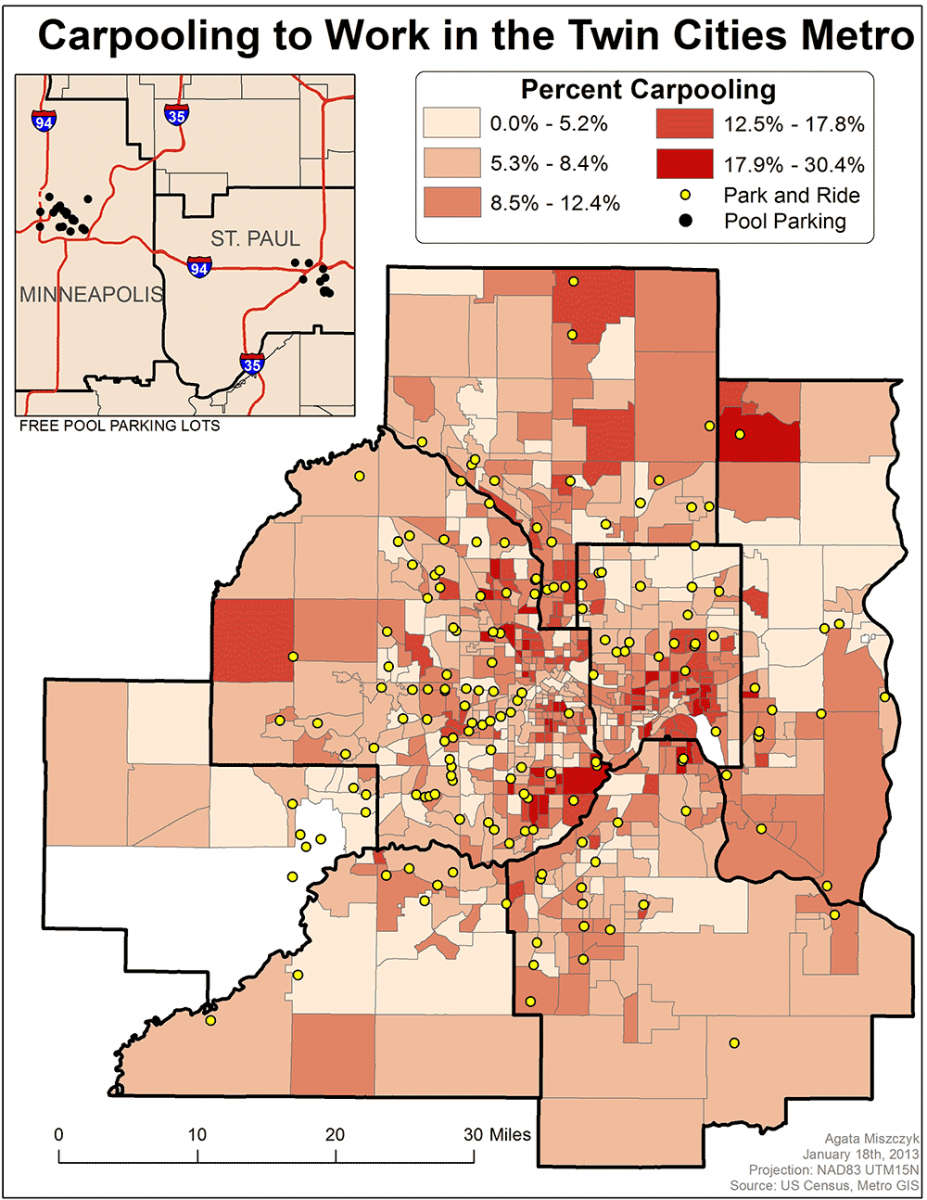 The map above shows the percentage of commuters who carpool in each census tract. The downtown St. Paul as well as the southern and northern Minneapolis areas seem to have the largest percentage of commuters, perhaps because they are in close proximity to numerous large firms and companies. While the park and ride lots are pretty well distributed, there is no correlation between access to a park-and-ride lot and carpooling. This is perhaps due to the fact that a rideshare can originate from any location, not necessarily a park-and-ride.

While large scale public transit infrastructure cannot be implemented everywhere, carpooling doesn’t necessarily require much new infrastructure; it just takes some logistics. So if you want to save time, money, and the environment, create a commuter account and let Metro Transit help you find matches.