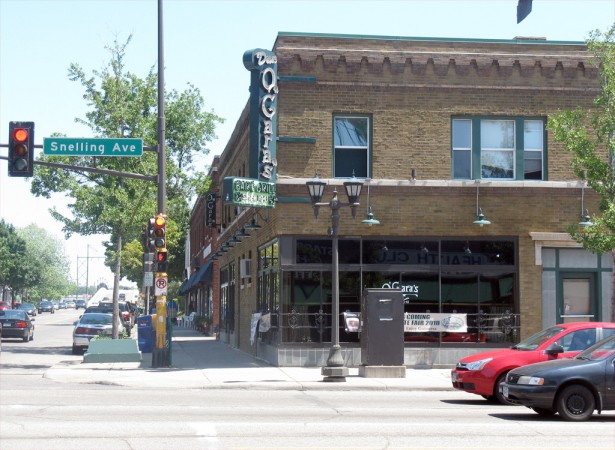 On the corner of Selby and Snelling Avenues in St. Paul, O’Garas expanded decades ago into the space once occupied by the Family Barber Shop, owned by Carl Schulz, father of Charles M. Schulz. (History lesson and photo courtesy of Jim Ellwanger/Flickr Creative Commons)

It isn’t as far from Saint Paul to Nepal as you might think it is.

This was all brought home to me several years ago, in the men’s room of O’Gara’s Bar and Grill on Snelling Avenue in Saint Paul, where I experienced an epiphany while gazing up at its fourteen-foot-high walls, and saw there evidenced a feat of heroic proportions-surely on a par, for ordinary men, that is, with Sir Edmund Hillary and Tenzing Norgay in their conquest of Mount Everest.

This small, absurdly tall room had an annoying dimness, attributable to its “aesthetic” color combination: a deep, dark brown coat of paint defined its lower level, to about six feet or so, and from there on up to its distant ceiling, a putrid dark green took over. Yet I was strangely mesmerized by the relentless march of that ghastly green up the endless wall.

And that’s how I saw it-while gazing up at that expanse of avocado concrete-an interruption in the bland surface, a simple graffito proclaiming, “Big Irv was here.”

Few restrooms escape the plague of graffiti, man’s eternal desire to leave his mark. What made this scribble remarkable was its distance from the floor-it was even beyond a tall man’s reach from the top of the urinal, even if he could manage to balance himself on the porcelain fixture. How could this act of bravado have been accomplished by some mere, beer-swilling bar patron?

This is what I was pondering while tilting my head back to admire Big Irv’s claim-and then spied his better. At a still greater height, an astoundingly greater height, lay a second inscription, written perhaps in scorn of Big Irv’s bold boast. A scrawl at the very top of the wall pronounced: “So was Big Jake.”

I was astounded by the defiance of all laws of nature embodied in that taunt. I felt that I was in the presence of greatness and mystery, much as Howard Carter must have felt when he at last broke through the final wall and stood before the great tomb of Tutankhamen. Who could possibly have foreseen what great discovery awaited me in this men’s room, now a monument to the irrepressible ambitions of man?

As I gaped at the distant mark, another patron entered and took stock of my earnest but slack-jawed upward gaze with apparent alarm, so I left hurriedly, unable to give the moment its due.

Years later, I went back to O’Gara’s to see if perhaps those two brief epistles had survived the intervening remodel. But no, it was not to be. Not even a shadow remained. (I can only hope that the tradesman painting the remodeled restroom paused at least for a moment-in silence and out of respect-for the hand-lettered testament to masculine enterprise that he was about to consign forever to oblivion.)

I quaffed a beer as a toast to both Big Irv and Big Jake, and left that venerable old establishment with a lift in my step and a tip of my hat, thankful for having been made mindful of the great heights to which men can aspire-whether these heights reach into the sky in Nepal or the dingy walls in a bar’s restroom in Saint Paul, Minnesota. While Sir Edmund Hillary and Tenzing Norgay were the first to go “where no man had gone before,” it would do them well to move over just a bit atop Everest’s empyrean heights to make room for Sirs Big Irv and Big Jake, who surely stand for the ordinary man’s capacity to aspire to-and achieve-greatness.

Gordy Palzer, in his ongoing quest to be a serious writer, has now resorted to writing a humorous story for the 2011 Saint Paul Almanac. As was the case a year ago, this pilgrimage has continually been delayed by various calls to other noble duties along the road of life, such as grandparenting, eking out a living through bone-wearying labor in a deli, and maintaining a backyard koi pond and wildlife-friendly yard. He hopes to semiretire next year and mine his rich mother lode of memories of growing up in Saint Paul before his faculties fail him!

Photo of O’Gara’s courtesy of Jim Ellwanger. Browse Jim’s photostream on Flickr or check out his website at www.ellwanger.tv