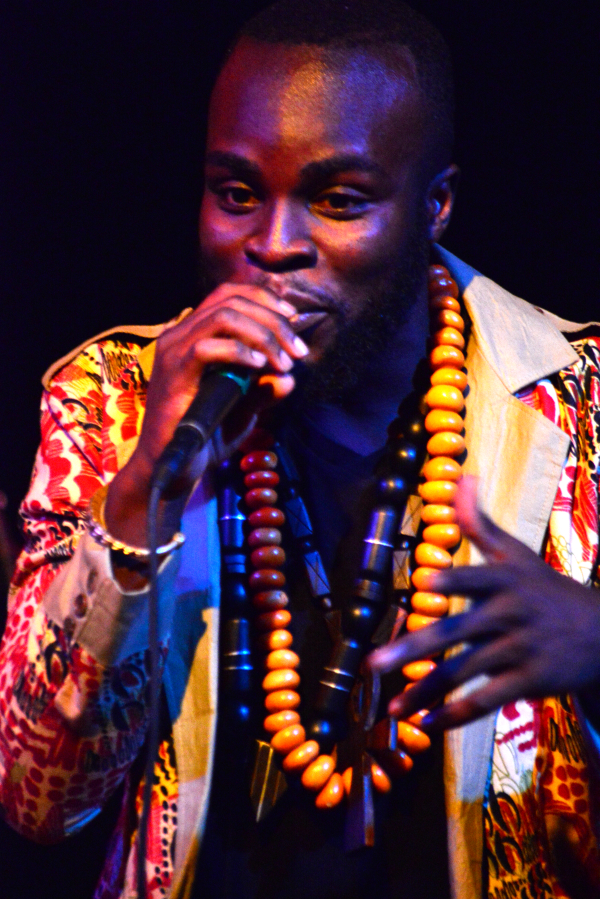 M.anifest wows the crowd at the Cedar Saturday Night

At first I was wondering if M.anifest‘s June 15 performance was going to be cancelled as only about a dozen people were there at the beginning of the show, the second in The Cedar’s African Summer series. Then the opening act, Minneapolis local, Ashley Dubose, came on stage and was so personable and sweet that it didn’t matter how many people stood around as she did a fantastic job to create a feel good atmosphere for the main act.

Ashley especially connected with the group with her song “Life Goes On.” Her style is neo-soul and reminded me a bit of Nelly Furtado when she sang “Like a Bird.” It was touching to see her mom out in support of her. As she continued to sing her repertoire for the night, the crowd began to build and by the end of her set, everyone was glad to be there.

About ten minutes after Ashley left the stage, M.anifest came out, and there were applause and shouts of joy from the crowd of fans. Not knowing what to expect as the last time I listened to rap music was way back to the Sugarhill Gang, I was more than pleasantly surprised with the songs and sounds of M.anifest. The band was superb, with trumpet and trombone flashing off the lights, and excellent electric bass and guitar, drummer and keyboard rounding out the group.

M.anifest rocked the house, with his charismatic stage presence, and got the crowd in the groove with waving arms, jumping down into their midst and singing personally to a trio of kids up by the front of the stage. It became a group sing a long for a bit as the crowd sang along with him. He performed hit songs such as Makaa Maka, Chale What Dey Happen and Suffer. It was a happy crowd at the Cedar this Saturday night.

M.anifest is from Ghana, but has Twin City roots, having come here in 2001 to attend Macalester College, where he earned a degree in economics. He is known as being a socially conscious rapper, having produced the album “Birds and Bees” to make people aware of the non-profit group, Young Entrepreneurs Africa.

He has collaborated with music artists like with Damon Albarn (Gorillaz), Flea (Red Hot Chili Peppers), Erykah Badu and others.

This concert is the second in the series African Summer 2013 at the Cedar in Minneapolis. The Minneapolis music lovers will enjoy this series immensely as they hear music and styles performed in fresh new ways. I am glad I went and came away with a new appreciation for Ghana rap music.

Made with lots of butter and filled with marzipan and rum soaked raisins, stolen is a specialty of Bread Star Rising