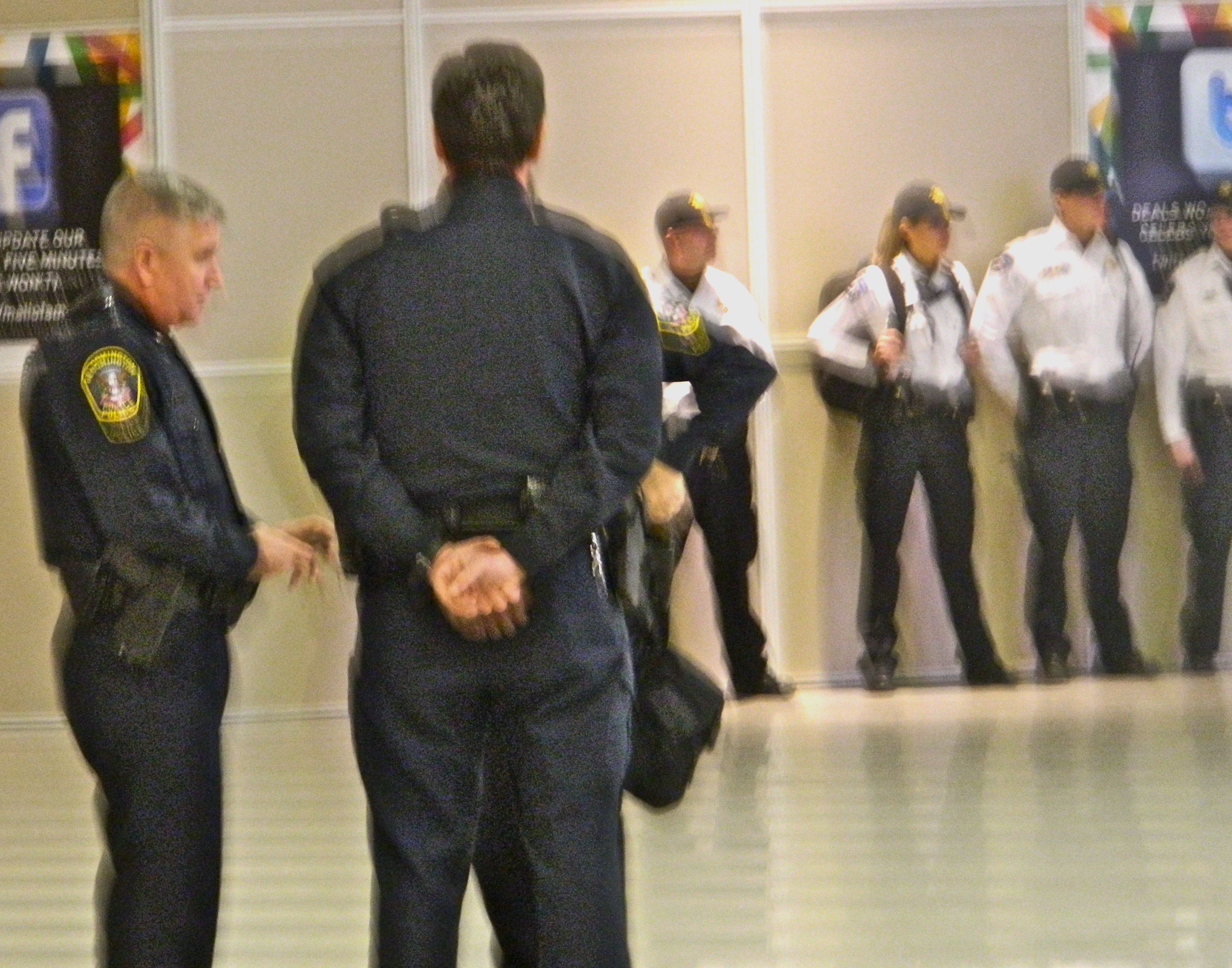 Yesterday, I went to watch and take pictures of the round dance planned for the Mall of America. This sounded like fun. The way to bring in the new year. Then Facebook, email and blogs had rumblings and warnings. Mall of America planned to arrest people. Then I knew I had to go. Instead of a spectator, I would be a reporter to ensure social justice.

I was running late because of an errand, so I missed the news conference. I walked in from a parking lot far away. Yet there in the corner was clear signal of trouble brewing. About 9 officers with two different types of uniforms were getting instructions. They had cords hanging behind their ears. I struggled to get out my camera and they immediately dissipated.

Little did I know that I was already marked. Follow me after the fold for what happens next.

My friend went to get a locker. I went to the Rotunda. I was taking pictures of the various groups of 4-7 officers, when a big booming voice from behind me asked what I was doing. I was not spooked since I had spotted the officer before. This was a favorite tactic of Sheriff Fletcher crowd. So I could not help the big smile, that I gave him when I answered, “taking pictures”. I finished my planned pictures. Then I turned around again. I pointed the camera at the young booming-voice officer, “Would you smile for me?” He scowled and ducked behind a pillar.

I then went to the other side and called my friend. This time she picked up. We had had trouble with calls not ringing all evening. I waited.

A handsome young 10-quality military-buff gentleman, with the shortest haircut, flashes me a big smile. Lets call him Mr 10. He says something like “Do you know what is a happening here? Why are all the police here?” OK, I might have a handsome 10 quality young gentleman politely talk to me — if my gorgeous daughter is standing next to me. But do you know how often that happens in social occasions without the gorgeous daughter? Ahhh, never.

In anticipation of an interesting conversation with Mr 10, I am smiling.

Mr 10 has what looks like a girlfriend hanging on his arm, who looks unhappy. I answer Mr 10′s query about what is happening. I tell him that an Indian Round Dance should be occurring any moment. But unlike Christmas carolers and flash mobs, the Mall of America does not like them. I explain that the Mall of America thinks it is a private place even though it has huge public subsidies. Some of us think that is wrong.

Now a curious sort would have just moved on. Mr 10 asks me what my purpose is. I answer “to take pictures”. He looks surprised. He asks if the pictures were for the group. I said “maybe”. Somehow he worked searching of bags into the conversation.

Then he claims he is from Des Moines. Ah, yes. Stunning handsome visitors from Des Moines often stop little old ladies for long conversations at the Mall of America. Especially with a pretty young lady standing next to them. Yeah, that explains it.

I explain that I need a better picture site, maybe from the second floor. Mr 10 and his lady decide they need that too. Mr 10 invites me along. Oops, I say. I have to wait for my friend before going up there.

My friend from city government shows up. She has just finishing telling her boss that he might have to come rescue her if she is arrested. Her boss is amused.

We go to the second floor. Mr 10 and girlfriend have disappeared. We have amusing conversations about what might be happening. However it gets creepy when officers show up with huge bunches of plastic handcuffs. They are planning mass arrests. No matter how illegal, police forces keep doing mass arrests. My spirits sink.

We break for chocolate and coffee. In the coffee line, two officers line up behind me. One officer stands glaring at the two people with student-video ID badges and video equipment.

We chat in the coffee shop, waiting for something to happen.

At one point, the officers just totally relax and it is getting late. We decide to stop waiting.

We start walking around the mall. I have to stop and eat munchies. A lady I sort of recognize is sitting there. She looks sad. I ask her if she perhaps knew what had happened to the Idle-No-More dance. She said that it was called off because of the harassment of the top level organizers. Given what had been happening to me for just taking pictures, I wonder at what had to be happening to actual organizers. Two people were arrested.

My friend made it a great evening. However, I am a mixture of sad and angry. How can we allow the Mall of America, who took all of that public money, to do such horrible discrimination? Last year the round dance was allowed and it was a huge success. How can simple dancing make some people so afraid that they have to use force. Christmas carolers are ok, but round dancers are not? Is it because it comes from the American Indian tradition? My sense of fairness is totally violated.

This situation is best summed up by grumpelstillchen at Daily KOS:

At last year’s Idle No More Round Dance at Mall of America, people of all colors, creeds, cultures and commercial orientations joined together in song to experience a secular celebration of (Native American) religious beliefs much in the same way Christmas carolers—often in exquisitely flash mob-form at major shopping centers, transportation hubs and other public places throughout the country, and indeed throughout the world.

Despite the success of last year’s event, Reyna and several of her colleagues found an unexpected lump of coal beneath their trees this year: a letter from the management of the Mall of America threatening the arrest of participants in this year’s planned event.

The planned event was never designated as a protest, or a political statement, but, in the letter from Mall of America management, the grounds for arrest are predicated on the erroneous characterization of the Round Dance is a political event—a protest even. But it isn’t, it is every much as legitimate a public expression of secular religious celebration not unlike the small sampling of similar events I have posted below from other ethnic groups, nationalities and traditions—just for fun!

We should tell the world that the Mall of America is just for white culture only!

I think we should take this to the legislature. The Mall of America should either return all the public money with interest or treat everyone equally and fairly.