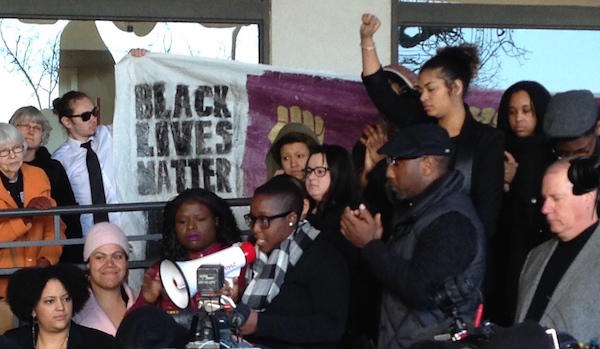 The Mall of America (MOA) is private property.  So are the other shopping malls in Minnesota.  One may not agree with that legal fact but that is the law in this state.  This means that owners of shopping malls have a right to deny the public access to their property for the purposes of exercising free speech rights but that does not mean they can deny them access on the basis of race.  This distinction seems to be lost in the dispute regarding the trespass prosecution in the “Black Lives Matter” case.  A basic understanding of federal and state constitutional and civil rights law clarifies this issue.

There is no debate that subject to some time, place, and matter restrictions, the public enjoys broad First Amendment expressive rights on public property.  In the proverbial town square the public has a right to criticize the government or make any other political statements it wishes.  The Fourteenth Amendment’s Equal Protection clause guarantees that this right cannot be denied on account of race.

But shopping malls are not town squares.  In Lloyd Corp. v. Tanner, 407 U.S. 551 (1972), the US Supreme Court ruled that there is no First Amendment right to distribute handbills or express political messages in shopping malls.  Malls are private property and the owners may exclude or prevent the public from distributing or expressing their political views their.  However in  Pruneyard Shopping Center v. Robins 447 U.S.  74 (1980) the Supreme Court also recognized that while there is no federal First Amendment right of the public to use malls for political purposes, state constitutions may afford such a right.  That is the case in California.  In New Jersey its Supreme Court in New Jersey Coalition Against War in the Middle East v. J.M.B Realty Corporation, 138 N.J. 326 (1994) ruled that shopping malls had become the “functional equivalent of downtown business districts” and therefore  owners could not interfere with reasonable expression of free speech rights as protected by the state constitution.

The Minnesota Supreme Court did not follow New Jersey when it ruled in State v. Wicklund 589 N.W.2d 793 (1999) that the state constitution did not guarantee the free speech rights of the public at MOA.  It rejected claims that extensive government involvement in the planning and financing  of the MOA made it a public entity and it turned back arguments that the mere holding open of private property to the public for any purpose make it public property.  The Court also rejected the functional equivalent argument of the New Jersey Supreme Court.  The Court may have gotten it wrong then and perhaps conditions in the last 16 years have undermined the validity of that precedent making a new challenge ripe.  But as of last year, Wicklund is still the law.  No one, regardless of race, has free speech rights at MOA.

But just because MOA can limit the public from exercising its free speech rights, it may not exclude individuals on account of race and gender.  The 1964 Civil Rights Act is clear on this matter.  MOA is a public accommodation under federal law and case such as Heart of Atlanta Hotel v. United States, 379 U.S. 241 (1964) are clear that businesses and establishments may not discriminate on account of race.  In Roberts v United States Jaycees, 468 U.S. 609 (1984) the U.S. Supreme Court ruled that even under Minnesota’s anti-discrimination law, many clubs and associations would be barred from banning individuals based on gender and race.  Federal and State law is clear–if the MOA were to decide to ban individuals from their premises based on race they would be acting illegally.

There is thus a difference between federal and state anti-discrimination and free speech law.  This is important because it does not appear that MOA barred Black Lives Matter from protesting because of their race.  If they did then shame on MOA and they ought to be sued for civil rights violations.  Instead, they barred the group because current law did not give Black Lives Matter a right to free speech at MOA.  When the group demonstrated there against the wishes of MOA that was trespass under current law.  Whether they should be prosecuted is a different matter.

But what is critical to understand is the purpose of the Black Lives Matter protest at MOA.  Were they protesting against MOA racist policies, against a State Supreme Court ruling liming free speech rights at the mall, or against Ferguson and racism in general?  Again, Federal and State law make it illegal for MOA to discriminate on account of race.  If that is the allegation, then the protest of MOA’s policies is powerful and ranks along side of Rosa Parks sitting at the front the bus and therefore Black Lives Matters was within its rights to do.  But if the protest were to challenge current state law about the status of the MOA as a private entity that can restrict free speech rights (such as to protest Ferguson), then this is not an issue really about race but about expressive freedom.  This  is an entirely different issue that really is not about race and unfortunately current law does not support Black Lives Matter.

The Black Lives Matter protest at MOA entwines and confuses issues of race and speech.  Whether we like it or not the law treats civil rights and expressive freedom differently.  Understanding how the law differentiates between the two, along with clarifying the motives and goals of both MOA and Black Lives Matters, is critical to understanding the difficult questions in this case.