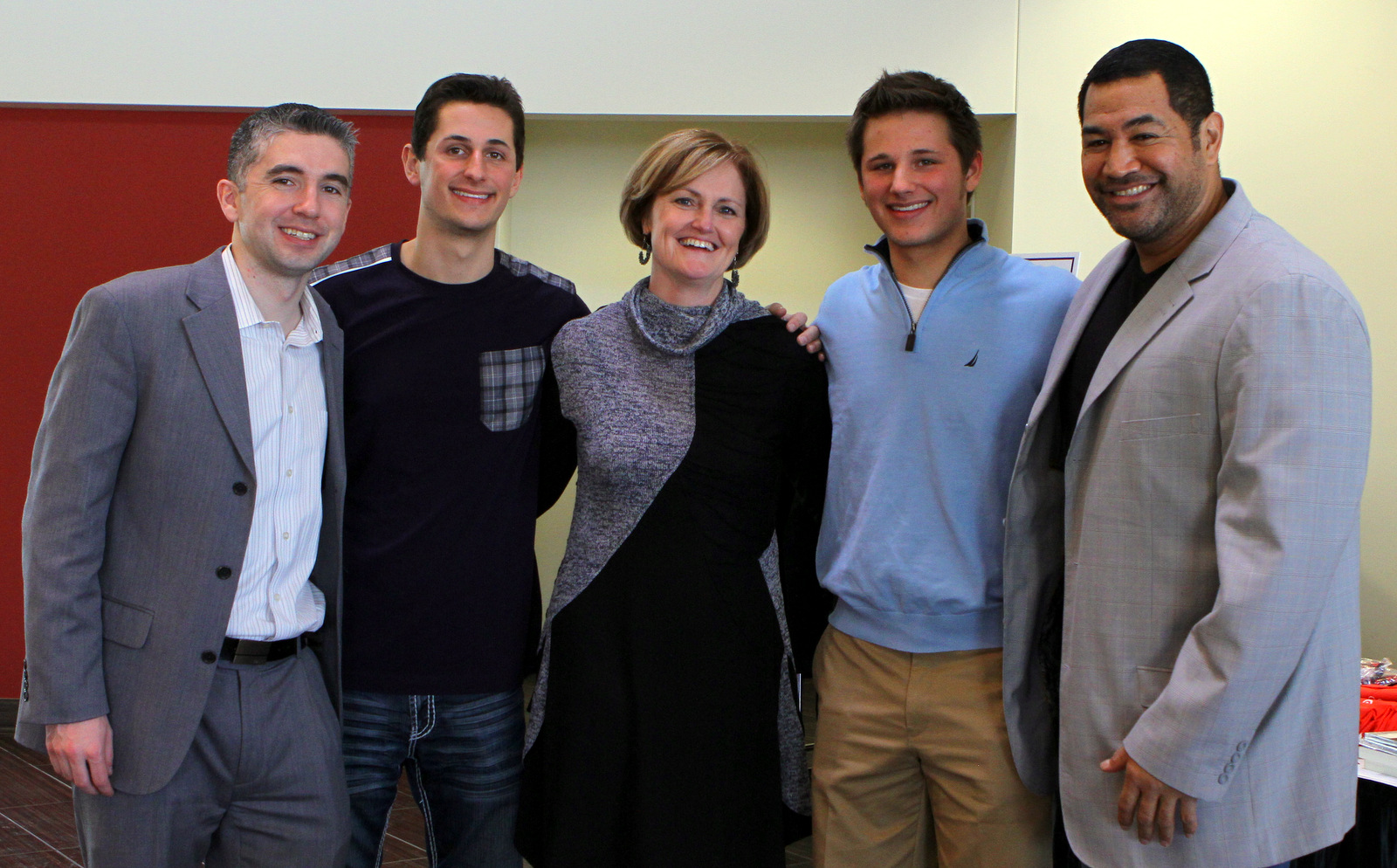 Esera Tuaolo, once an NFL defensive tackle for the Minnesota Vikings and Green Bay Packers, is convinced that he’d be dead if he had come out as gay in high school. By contrast, Nick Kleidon, former player on the Breck School hockey team, and 25 years Tuaolo’s junior, did come out in high school, with no negative consequences. Tuaolo, who remains a Twin Cities resident, described “getting choked up,” when he first met Nick, standing alongside his partner, Colin.

Some of the audience assembled at Hamline

Both athletes shared their stories at Cultivating Respect, a conference and awards dinner dedicated to work being done in the Twin Cities to create safe schools for all students. Organized by PFLAG (Parents, Families, and Friends of Lesbians and Gays) Twin Cities, the event was held at Hamline University on January 18. Also participating in the Invisible Athletes Forum was Becca Lindquist, a recent University of California Berkeley grad, Division 1 rower and winner of conference and NCAA championships.

Moderator Patrick Burke, a scout for the NHL’s Philadelphia Flyers, set the tone and context for the forum. Burke is founder of the You Can Play Project, an effort to end homophobia in sports. He and two others launched the project last year in memory of Brendan Burke, a student manager for the Miami University Red Hawks hockey team, and Patrick’s younger brother. Their father, Brian Burke, was general manager for the Toronto Maple Leafs and U.S. Olympic Team. 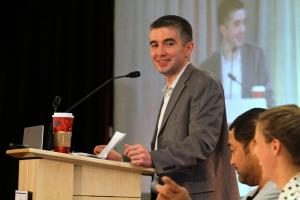 As a high school senior, the younger Burke had made the competitive varsity hockey team, but chose not to play, fearing his secret would be revealed. Also driving him away was the steady stream of gay slurs he had to endure in the locker room. In college, Brendan decided to rejoin the world of hockey, as a student manager. He began coming out in late 2007, first to his family, then to his team and the public in 2009.

As the first out hockey player, Brendan was an example of courage for gay athletes around the world, says his brother, Patrick. Brendan Burke died in a car crash at age 21, in February 2010.

Like Burke, Tuaolo and Kleidon came out very publicly after years of struggling to keep their sexual orientation a secret. Tuaolo did so at age 34 in a nationally televised interview. For Kleidon it was the occasion of his senior year speech at Breck last spring. A video of that speech then circulated online during the 2012 election, as part of the campaign to defeat Minnesota’s anti-gay marriage amendment.

Today, Esera Tuaolo describes his coming out as, “the most amazing feeling in my whole life.” He chose to reveal something he had known about himself for most of his life during a 2002 exchange with Bernard Goldberg on HBO’s Real Sports. 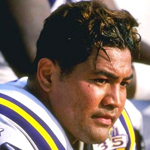 The Honolulu native told the PFLAG gathering about harsh challenges he’d experienced growing up gay in a very masculine Polynesian culture. At the age of five or six he witnessed a peer being beaten up for playing with his sister’s toys. He saw something of himself in that boy. At that point, not wanting to suffer the same fate, “I put part of myself in the closet,” Tuaolo says.

At 6’2”, 281 pounds, and playing professional football, Tuaolo could hide the fact that he was gay, but that decision came at a price. In the locker room, he was surrounded by comments such as, “You played like fags,” after a losing game. He recalls shaking as accusations about a teammate’s sexual orientation swirled around the locker room one day, leading to a fistfight.

Tuaolo is certain that being immersed in that homophobic environment and remaining closeted kept him from performing to the best of his ability. “I would have been so much more if I could have been myself.” Instead, a lot of energy was wasted on hiding the truth. 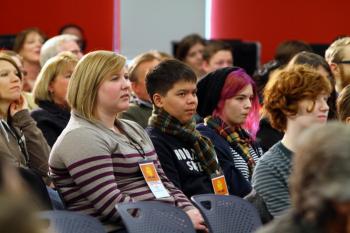 Upon leaving sports and beginning to raise two children with his ex-partner, Tuaolo decided that he needed to come out for the health and safety of his family. He became the third former NFL player in history to do so. Only after the HBO interview aired, did he realize the importance of what he’d done, “for a generation and a community.” Judy Shepard, mother of Matthew Shepard, the 21-year-old who was murdered for being gay, told Tuaolo he had an obligation from that point on to continue to work to eradicate homophobia and hate.

Now, traveling the country and sharing his message is his favorite thing to do. He’s also detailed his story in a book, Alone in the Trenches: My Life as a Gay Man in the NFL. We all want happiness, to be true to ourselves, and to be free, Tuaolo told the audience at Hamline.

Each year, Breck seniors deliver a five- or six-minute speech on a topic of their choice to the entire school. Nick Kleidon, hockey team member, worked up the courage to use that occasion to come out publicly. This was a dramatic leap for someone who describes himself as a “former anti-gay advocate,” who’d become well known for spreading his anti-gay message at every opportunity, often to the discomfort of his classmates.

Why is it that we want to figure out people as soon as we meet them? Why is it that when we gain new information about someone, we so often change how we look at them? After all, aren’t they the same person we’ve known all along? 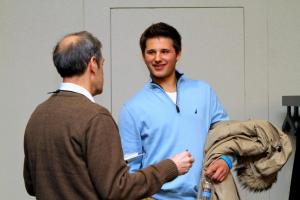 Nick Kleidon speaks with a reporter

Like Tuaolo, Kleidon grew up surrounded by religion, or at least that’s how things evolved in his family’s home. Tuaolo was raised in the Assembly of God church, something he now says he’s grateful for because he knows what the Bible “really says.” Kleidon’s parents, who hadn’t been churchgoers, joined the most conservative Baptist church his mother could find when he was in the fifth grade.

Kliedon vividly recalls the anti-gay message the minister preached one of the first Sundays his family attended. Because Kleidon had known from a young age that he was attracted to boys, he took the message to heart. He began praying hard to change and repeated much of what he heard at church. As an eighth-grader Kleidon presented a talk in English class about why homosexuality is wrong. In high school he sent a two-page analysis of why gay marriage is wrong to the Episcopal bishop.

John Bellaimey, Breck’s chaplain and Gay Straight Alliance advisor, describes Kleidon as the “most obnoxious ninth-grader,” and now among the most beloved alumni. Carol Curoe, president of PFLAG Twin Cities, a lesbian who is raising two sons with her partner, remembers the first encounter she had with Kleidon, during a speaking engagement at Breck. He was “respectful, but forthright,” says Curoe. He was opposed to the idea of two women having a family together, and wasn’t afraid to say so, but in a manner that allowed them to have a conversation. 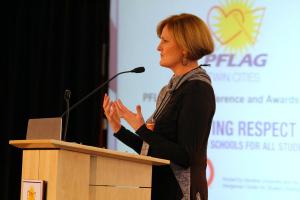 Over time, the young hockey player realized that he wasn’t going to change and began accepting himself for who he is. Looking back, he says he was “blessed” by his parents’ decision to send him to Breck, which “preached only love to everyone,” and an openness to different religions. Having allies like Bellaimey and a supportive environment, “made coming out 100 percent easier.” Kleidon says he’s not sure he’d be out if he had attended a public school.

At Breck, Kleidon was able to confide to some fellow students on the yearbook staff, one of whom told her boyfriend, a hockey teammate of his. He then came out to a sister and her boyfriend. Even though things went smoothly, Kleidon had reservations about telling his teammates. “In the locker room, everything is ‘gay.’” Kleidon said it was “disgusting” to hear such remarks repeatedly, making him question whether he could ever come out to other players. Eventually Kleidon did tell his teammates, and was gratified by their support. That led up to his senior speech. 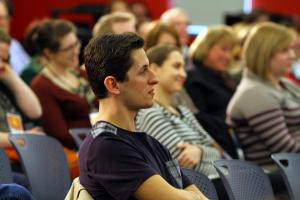 Now a student at Babson College in Massachusetts, Kleidon has been out in college from the start, with no negative repercussions. It’s his parents who continue to be a challenge, but Kleidon has begun to accept that parents generally need time to process this new information about their LGBT kids. The first thing his mom and dad did was to take him to counseling, “to make me straight.” He went once. Recently, however, they requested to meet Colin, who is studying sports management at the University of Minnesota. Both men report that things went well.

Nick Kleidon was interviewed on KFAI’s Fresh Fruit about the Cultivating Respect conference and his experiences growing up and coming out as a gay athlete.

Kleidon, Tuaolo, and Lindquist all say that they’re glad they’ve publicly shared an important part of who they are, but know that there’s much work to be done to create safe environments so that everyone feels free do the same. 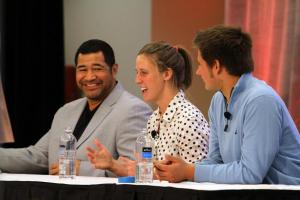 Tuaolo thanks God he’s not “six feet under,” and is proud and happy for younger athletes and allies who are paving the way for a brighter future. “We’re playing catch up now,” agrees Patrick Burke, who says that his optimism springs from all who share their stories and speak out. In coming months, Burke expects that athletes in every professional sport will contribute videos to the You Can Play Project.

CORRECTION – 1/30/2013: The Twin Cities Daily Planet has learned that Nick Kleidon was a member of the Breck hockey team, but not its captain. This misinformation, drawn from several published sources, is something that Kleidon has been trying to correct for some time. The article has been revised to reflect Kleidon’s actual status.