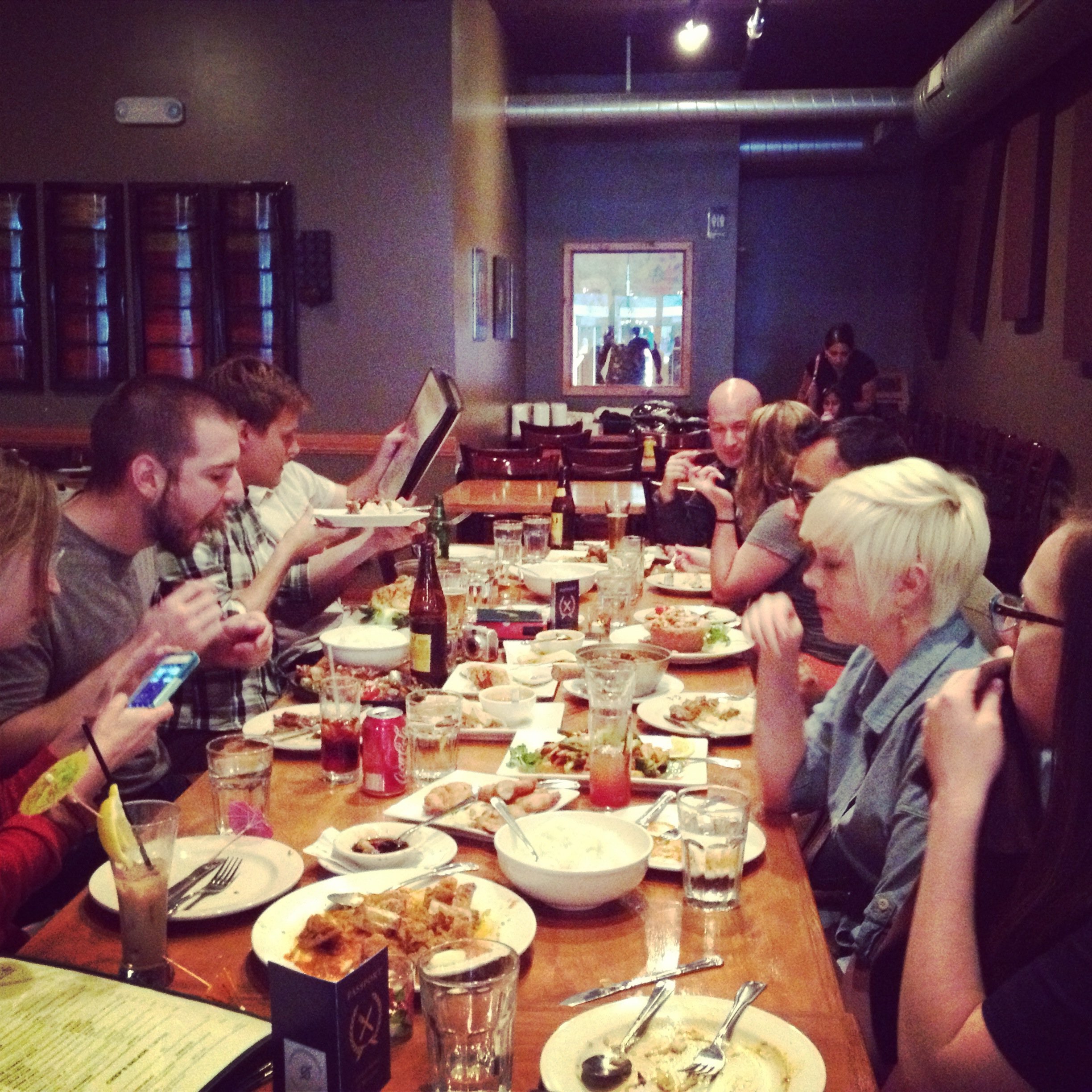 United Foodies of Minnesota on the tour Around the World in the TC dine at Stop #6: Peninsula Malaysian Cuisine

This month, the United Foodies of Minnesota traveled to Peninsula Malaysian Cuisine on Eat Street in Minneapolis. For many of them, it was their first time trying Malaysian food and the menu at Peninsula is quite extensive because of the multicultural and multiethnic nature of the country—from Malay to Chinese, Indian, and Thai.

“What should we get?”

The waiter steered us away from the dishes that were drizzled with belacan, or a dark sauce made from fermented shrimp paste. Of course, our curiosities were piqued, so he brought out small sampling of jicama with the shrimp paste for us to try. The belacan certainly had the smell of fermented shrimp, and let’s just say that many of us decided that it was for someone with more of an acquired taste.

We started off with the popular Malaysian favorite, roti canai, an Indian-influenced flatbread that is light and flaky. It was served with spicy curry chicken and potato dipping sauce that we wanted to pour over everything.

Although I usually enjoy the nyonya laksa spicy coconut noodle soup at Peninsula, I decided to go with my other favorite, the Buddhist Yam Pot. The yam pot consists of taro that is shaped into a little nest and crisp fried. It’s then filled with a medley of shrimp, chicken, mushrooms, snow peas, baby corn, carrots and cashews. It’s quite filling and I can never finish it in one sitting.

Edible food containers seem to be a thing at Peninsula, because another diner ordered my other favorite entree, the pineapple seafood fried rice. The delicious stir fried rice with shrimp, scallops, mushrooms, and vegetables is served in half of a pineapple—which makes for a wonderful presentation.

The United Foodies of Minnesota had some great facts about Malaysia for this outing. First off, the stamp created for the passport was of a kite, or a “wau,” because of its great significance in Malaysian culture. The word “wau” is believed to have originated from an Arabic letter that shares a similar outline as the shape of the kite wing. According to Malaysian legend, kites were originally used by farmers to scare off birds from the paddy fields and to lull their children to sleep.

Malaysia has three official kites. The most popular one of all is the “wau bulan,” a kite that is named after the moon because its tail is shaped like a crescent. It is known for its easy handling and stability. In the fables, the wau bulan originated from a young prince named Dewa Muda, who was believed to have a spiritual connection to his wau. Some people thought that he was successful in battle and conquering other districts because he flew his wau up to the heavens and sought special spiritual guidance from the inhabitants of another world.

Other fun facts included one about how 40 percent of the world’s trade goes through Malaysia’s Malacca Strait, which explains why there are so many different influences in the country’s cuisine. Also notable was the fact that the king (mostly a ceremonial role) is elected to a five-year term by nine hereditary rulers of the Malay states who rotate the honor among themselves.

At the end of the dinner, nearly all of us had a box of leftovers and a greater understanding of Malaysia to bring home with us. If you would like to join us for our next stop on our tour Around the World in the TC, please e-mail me at michelle@tcdailyplanet.net.