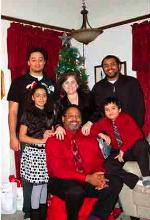 One of our own, David Branch, Lucy Craft Laney School Principal and a Folwell Neighborhood resident, was the recipient of the Minnesota Elementary School Principals’ Association  (MESPA) 2011 Division Leadership Award. David Branch is a life-long resident of North Minneapolis, growing up in the Willard-Hay neighborhood and graduating from North Community High School.

Principal Branch was awarded the honor at the MESPA’s 56th Institute Annual Statewide Convention, held at the Sheraton Bloomington Hotel on February 10. MESPA is dedicated to promoting and improving education for our children by strengthening the role of educational leadership. The MESPA Division Leadership Achievement Award recognizes principals “whose exemplary leadership and sustained efforts have made noteworthy contributions to the operation of effective school learning programs”  especially by, “improving education, their communities, and their profession.”  Principal Branch was nominated by Joan Franks, principal at Armatage Montessori School in the Minneapolis Public School District and was selected to receive the award by a group of his peers. In her nomination Franks stated, “David has done an exceptional job of leading the Minneapolis Principal’s Forum through some difficult times including the transition of a new superintendent, negotiations, and new policies and procedures that have directly impacted the role and responsibilities of principals. He is deep thinking, articulate and fair in his assessment of the work we do…on a more personal level, David is humorous, approachable and a great advocate for his school as well as the Minneapolis Public Schools.” Fred Storti, MESPA Executive Director, stated that award recipients, “are leaders in our profession and truly represent the very best in Minnesota Public Schools.”

Principal David Branch was recognized for three major career accomplishments, including his work as the principal at Anne Sullivan Communication Center, principal at Lucy Craft Laney and president of the Minneapolis Principal’s Forum. While at Anne Sullivan he worked collaboratively with veteran teachers to implement Positive Behavior Interventions and Supports (PBIS) and also the Teacher Advancement Program for improving teaching and learning, thus helping to move the school forward with effective and sustainable reforms.

In May 2007, David was offered the opportunity to lead Lucy Craft Laney through major educational reforms as a part of the Northside Initiative.  Among the successes at Lucy Craft Laney is an increase in parent involvement resulting in an active PTO and site leadership council, and the addition of the Advancement Via Individual Determination (AVID) program, a program that has made significant changes in the school culture by intentionally embedding an African American Male Initiative model. Principal Branch states that, “We have gone from a school where many teachers choose not to work because of the challenges we face, to a school that attracts teachers who want to make a difference in the lives of our students and families.”  David is currently the President of the Minneapolis Principal’s Forum and is the MESPA representative on the statewide Minnesota School of Excellence Committee.

As the principal at Lucy Craft Laney School, David Branch is the “buck stops here” person for delivering its mission. The Lucy Craft Laney mission is: to deliver young minds embracing learning, with a vision of creating; a community that values its children and their quality of life; through the values of; commitment, cooperation, respect compassion, hope and trustworthiness. It looks like they have just the person to lead them. Congratulations David Branch. You make your school, community and family proud.