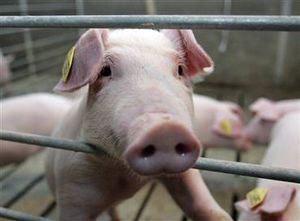 One shibboleth shared by conservative legislators (and the corporations that enable them) in attacks against the middle class is that wages and benefits must be gouged in order for American businesses to remain competitive in a global marketplace.

They then leverage that talking point in attacks on public sector unions–and in class warfare like the lockout American Crystal Sugar is conducting against union workers in the Red River Valley and elsewhere.

The new collective bargaining deal will mean a base wage increase of $1.50, improvements in health care, improved retirement security and a pension increase.

“The strong contract that we secured with Hormel is a pretty big deal,” said Dick Schuster, a Hormel employee in Fremont, Neb. for 38 years, in a news release. “At a time when pensions are under attack nationwide, we were able to bargain for significant improvements to our retirement security. Our contract is a testament to why sticking together and speaking with one voice benefits all workers.” . . .

. . .“Our communities need good jobs with pay and benefits that can support a family,” said Vincent Perry, a four-year veteran at the Hormel plant in Algona, Iowa, in a news release. “Good union contracts like ours help build more stable and secure communities.”

Not all news coming from the livestock industry is good for rural communities. In an unrelated item, hog rustlers have been stealing pigs from barns in Southern Minnesota and Iowa. Higher hogs prices have made stealing truck loads of market-ready hogs worth the risk. The Des Moines Register reports in Pig thieves are getting ‘greedier and more gutsy’ in north Iowa, farmer says:

.. .Officials in both states so far are unsure where the hot hogs are being sold and say it’s possible they’re being trucked out of Iowa or Minnesota.

“It would take a well-organized operation to transport this many animals,” said Marc Chadderdon, an investigator with the Nicollet County sheriff’s office in St. Peter, Minn. “I think they go out and they’re doing their recon ahead of time, and they’re picking these barns for reasons.”

Reed Kuper figures there could be a ring of 10 to 20 thieves involved. He’d love to gather all of them in a room for questioning and play them against each other.

“Then everybody’s going to start squealing,” he said.

Photo: Oink! Union workers are bringing home the bacon for their communities, while hog rustlers are stealing it from farmers.