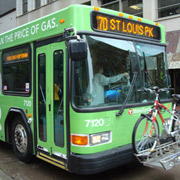 Transit and human-powered transportation have gone hand-in-hand since the first horse-drawn streetcars plied city streets in the 19th century. Despite the current dominance of private cars for travel in America, the relationship between nonmotorized mobility and buses and trains remains strong and growing.

Metro Transit research has shown that more than four out of five bus riders walk to their stops, mostly a half-mile or less. In addition, an increasing number of passengers pedal to catch the bus or train and load their bikes on board. That figure nearly doubled over just 18 months in 2007 and ’08. A new survey by the Twin Cities transit agency of bike-to-ride usage is due out in a few weeks.

As we celebrate Twin Cities Bike Walk Week June 2-10, exciting new links between foot power and transit may be just over the horizon. For example, Metro Transit is reviewing technologies to collect fares via smart phones, which could lead to many cross-mode applications. How about free transfers from Nice Ride Minnesota bikes to transit?

We’re not there yet, but “I might speculate that in the years ahead mobile devices will be the key to getting transit, bike share and car share on a common platform,” said Metro Transit spokesman John Siqveland. “One can imagine an app that pays fares, rents bikes and opens HOURCAR doors.”

Coordination between Metro Transit and Nice Ride already is widespread. The two systems cross-promote each other with bus advertising at bicycle kiosks and Nice Ride ads on buses and trains. Proximity to transit stops is an important criterion Nice Ride uses to locate its expanding network of kiosks. And Nice Ride surveys have found that a significant number of subscribers combine bike-share trips with transit.

“Although we know that Nice Ride is replacing some trips that were previously taken by bus and train, we also know that many people are using buses and trains more frequently in integration with Nice Ride,” Siqveland said.

The numbers show that the synergy works well for both systems. Metro Transit ridership topped 80 million last year for only the second time in 30 years. Nice Ride patronage doubled last year from its 2010 maiden season, totaling more than 217,000 trips in 2011.

All Metro Transit buses and trains are equipped with free bicycle racks, and the agency offers an interactive online guide to bicycle lockers at dozens of metro locations. Another interactive Metro Transit web site lets you find bus and train schedules, park-and-rides and individual stops.

One more bike-walk-transit travel boost comes from Commuter Challenge, which promotes sustainable alternatives to driving alone, including telework and car-pooling. Last year, the group, a partnership of Metro Transit and four local commuter planning and service organizations, reported that its thousands of members took 195,000 trips to work covering 2.45 million miles without driving solo.

They saved 114,000 gallons of fuel and nearly 700 tons of carbon dioxide emissions, while also getting a chance at weekly $50 gift-card prizes. Bicycling and walking accounted for 37 percent of the trips, transit for 45 percent.

Walking, as I’ve pointed out before, is the most basic form of human transportation, dating to before the invention of the wheel. It’s healthful and free, although by itself it supplies only limited access around a large metropolis. But integrated bicycling and transit can augment shoe leather, getting us to everything the Twin Cities has to offer—even if we don’t have a car, or just want to leave it in the garage.