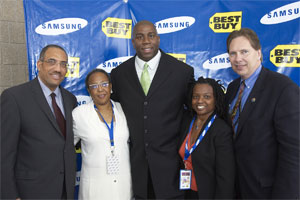 Earvin “Magic” Johnson recently blazed through the Twin Cities area, bringing a message of encouragement, economic strategy, and reciprocity. The visit marked the end of a national Best Buy retail promotion for Samsung’s Four Seasons of Hope to raise thousands of dollars for the Magic Johnson Foundation.

Johnson intimately addressed members of the Black Employee Network as well as other employees at Best Buy headquarters in Richfield. He also spoke to seventh-graders at Richfield Middle School, a recipient of a grant from the Richfield Kids Technology Initiative, which was funded by Best Buy.

John Thompson, senior vice president of Best Buy Co. Inc., introduced Johnson as a “business leader, community builder, and change advocate.” The NBA legend has earned these titles with the success of his foundation, whose mission once was to raise funds for community-based organizations dealing with HIV/AIDS education and prevention programs. Its mission has now broadened to improve the quality of life for people residing in minority communities. “Everything that minorities need, we bring it to them,” Johnson said.

Johnson business strategy focuses on using urban areas as a primary source for a new market, thus directly responding to shifting demographics within America’s urban communities. He has reversed the trend of important businesses, including supermarkets and movie theaters, relocating to growing suburban communities, forcing urban consumers to travel miles for quality retail and entertainment choices.

“We go into communities where there are heavy [minority populations] to see what’s needed…what’s missing. We go into churches too. We try to look for landmark situations,” he said.

Johnson challenged the young employees of color sitting in the auditorium at Best Buy. “Our parents and grandparents were not at companies like Best Buy…now that we are at the table, we have to do more and be more than just a minority at a big company with a great brand,” he said. “We can’t just deliver, but we have to over-deliver. Then we have to reach out and touch others.”

He talked about the power behind branding and networking as he responded to one employee’s request for advice: “Get to know everybody, find out how long they’ve been there, sit and talk, come early, stay late, and pick their brain. Keep what you need, throw the rest out…dialogue…trade information and success stories. Information is the key. You may lose a battle, but you will learn from it. Always be ready.”

Johnson spoke a lot about his own life, coming from a family of 10 children and being influenced by two important African American businessmen in his hometown of Lansing, Michigan.

“At 16, I wanted to be a basketball player and a businessman. I cleaned a seventh-floor office building, and on the top floor was the office of the CEO. I sat in that big leather chair and pretended to be the CEO of a company,” Johnson recalled. In many ways, Johnson empathizes with urban youth. “I was once one of them. I understand their dreams and goals. All young people want is hope.”

The vision he had in his youth has now come full circle. As a businessman, he is able to provide opportunities for his employees and his customers. “I have 20,000 minority employees and 30 million minorities are affected by my business. I make sure to resonate with the customer base then hire people who look like them,” he said.

Johnson owns nearly 100 Starbucks in 40 cities. “They said that Blacks and Latinos would never pay $4 for a cup of coffee. [Minorities] follow the brands first, and they want that same building in their community…in urban America,” said Johnson.

“We have a new customer to speak to. ‘We love the brand, just talk to us,’” Johnson emphasized. “‘We don’t eat scones. We want pound cake and sweet potato pie. And no elevator music. We want to hear Motown and R&B.’ Now that will increase purchases!” he added while snapping his fingers to a groove.

“You have to know how to go into urban America…on the ground,” said Johnson. He spoke of his successes, one after the other: Ten 24-hour fitness chains that clear $500,000 in revenue every month, six theaters, the number-one T.G.I. Friday’s for liquor sales, 30 Burger Kings with sales up 20 percent, 15 mixed-use projects with a condo/retail model, and a partnership with Washington Mutual worth $2 billion in five different markets.

“We’ve created the place to be. I know my customer base, and they bring their friends. Brands will get them inside…You want them to make a purchase and bring back a friend,” he said. “In the theaters, I have fried chicken and four hot sauces!”

Johnson has proven that work ethic, education, and vision can get someone very far in life. He talked about a time when he walked in one of his Starbucks stores and there were 10 people in line with only two workers — and there was spilt coffee on the floor. Naturally, Johnson went to the back to retrieve a mop. The store manager was frantic. Johnson told him to pay attention to the customers in line. “I don’t mind working…Besides, you don’t forget how to mop,” he said amusingly.

Relationships are also a responsibility on the road to success. Johnson is head of diversity for NASCAR. “Did you know that 25 percent of their [TV] viewing audience is minorities?” he stated, adding that minorities haven’t attended live NASCAR races in the past because “They didn’t think they’d be accepted at the track.”

He also talked about other unique connections. “I’m politically strong. I know every mayor, governor and city council in America…I invite them all to my events,” he said. “You can’t complain about the situation if you don’t get out and vote…Understand that and understand the process.”

Johnson has proven that there is business in urban America. “The dollar has to recycle,” he said. “Build wealth, not debt, and be able to pass it on.” Speaking directly to Blacks in the room at Best Buy headquarters, he advised, “Stop worrying about who the chief is, and when we get successful, don’t change your lifestyle. We’ve all been blessed. The key is making sure someone else has that opportunity.

“Encourage people to take advantage of quality education. Learn to work with different kinds of people,” he added.

“I can’t fail. My brand can’t fail. I have no competition. I’ve got a [captive] audience with disposable income who want to spend their money in their community,” Johnson said, referring to his businesses and the buying power of the Latino community (a $1 trillion market) and that of African Americans (an $800 billion market).

“We’ve given people choices and options,” Johnson said. “We’ve lifted their property value and made their communities a desirable place to live, even to the point where people are able to use their equity to buy a second home or business.

“They also have somewhere to go in the community; they take ownership…my Starbucks…my theater. I believe in people, and [in doing so] I’m leveraging community leaders.”