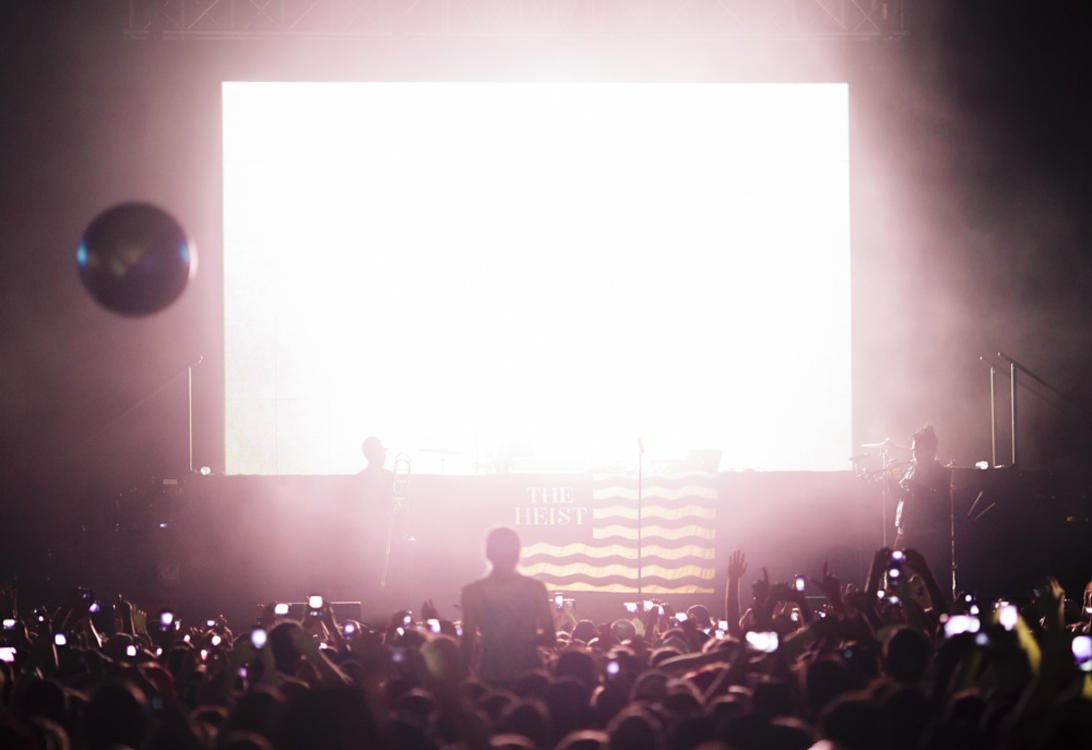 If I had had a ticket to the August 31 Macklemore and Ryan Lewis show at the Minnesota State Fair, my review might have looked something like this:

It came in torrents. First, the rain and lightning that rolled through the Twin Cities, forcing an evacuation of the Grandstand as ticket-holders’ frustrations poured out under vendors’ tents. When the fans were finally allowed to return, and after Talib Kweli won over some unsuspecting high schoolers, they came out. It was as if they had been shot from an evil genius’s giant Super Soaker: the skinny boys Macklemore and Ryan Lewis flew onto stage and whipped up the sold-out crowd like something elemental.

As if to impress upon the crowd their understanding and sympathy for the delay, Macklemore and Lewis opened with earnestness on full display in the slow-burning, Cracker Jack album decoder ring, Malcolm Gladwell’s Outliers-inspired “Ten Thousand Hours,” which also holds the first slot on their quite good 2012 album, The Heist.

Ten thousand hours: the pop-sociologist Gladwell’s approximation of the practice time and dues paid it takes to become an expert, a master, a dope emcee.

After their second song, the hyper-popular and maddeningly catchy “Thrift Shop,” Macklemore (Ben Haggerty) stood over the crowd broad-shouldered to take in the screaming multitudes. He looks like a guy you went to school with, who rode dirt bikes, was always joking. The guy who you thought if the cards played wrong for would fall into drugs. And that’s what happened.

Haggerty spent much of the show cutting line after autobiographical line about the rocks upon which life has repeatedly dashed him—alcohol, drugs, infidelity, money. Yet like Bruce Wayne, Haggerty—with Ryan Lewis’s help—has rebuilt himself. He preaches from the stage in tracks like those first two, like “Wing$,” like “Otherside,” like “Same Love,” like “Make the Money.”

Sometimes he scores big. The marriage equality anthem “Same Love” is a good example. Sometimes he swings too hard, like in “Make the Money” and “Ten Thousand Hours,” where he shrinks behind clichés for hooks. But he sure performs the hell out of them, clichéd or not. Rain-soaked or not.

The way Haggerty bounds on stage, all fast moves, high knees, and joints, is reminiscent of the spindly Joker from the 1980s Detective Comics—around the time he killed Jason Todd and was appointed the Iranian ambassador to the United Nations.

He’s no Joker, but what he is to hip-hop certainly has been asked: appropriator, cultural force, something in between. Setting that aside, his enthusiasm to spill his own blood and bare his sins on stage is a welcome, if uncommon, compulsion. The focus on his substance abuse, as he says in “Otherside” and “Starting Over,” is in part a message for his audience, especially the ones with big dreams or struggles of their own.

Another was getting their music to the people. The Macklemore and Ryan Lewis model of shunning major labels and their bullish media arms has proved unorthodox and unpredictable, as well as successful. In a recent Rolling Stone profile, Brian Hiatt writes about Haggerty’s fears of being remembered as a gimmicky or one-song rapper, or as Hiatt put it, as a rap duo “[attracting] fans who didn’t buy Yeezus or Kendrick Lamar’s debut [release two weeks after The Heist].” Probably can throw “white people” in there, too.

Recently, there was a dustup in the rap pundit world about Kendrick Lamar’s verse on Big Sean’s new cut, “Control.” Lamar, a Compton rapper, proclaimed himself “the King of New York” and seemingly calls out by name a dozen top-of-the-charts talent for bringing down the genre. Charges included obsessing over designer clothes and collaborating with outsiders like Miley Cyrus and Lindsay Lohan. In an interview with DJ Rosenberg on the influential Hot 97, Kendrick clarified his verse, saying he respected the rap game and that he was trying to push it further. Lamar lamented that maybe he should “dumb down [his] lyrics nowadays.”

DJ Rosenberg was also quoted in a recent Rolling Stone profile of Macklemore: “‘Drake almost created his own genre,’ he says. ‘You know, soundwise, Drake took a lot of stuff that had been out there and really created something new…Macklemore has done the same thing with a totally different sound.’”

The 30-year-old Macklemore has come a long way since his 2005 Eminem-wannabe “Welcome to Myspace,” having carved out his own cadence, which often oscillates between staccato mania and awe. He crafts socially-minded lyrics in tracks like The Heist’s “Same Love” and “Wing$.” So to Lamar, Haggerty might say, “Don’t worry about them, dude. Just do you.”

Like Lamar, they’ve tried to push hip-hop. Whether it turns into a movement or proves permanent is a question of time. They seem to have expanded the hip-hop tent to include those who didn’t buy Yeezus or Kendrick’s good kid, M.A.A.D city, though those albums The Heist is not. And Saturday night’s enraptured crowd, surrounded by birthing animals, deep-fried candy bars, and teenagers sneaking away from their parents for a first kiss, seemed to prove Haggerty and Lewis’s influence—on who claps their hands on the backbeat, who dances to bars of poetry, who cares about an ex-addict emcee, who cares.

By the time Macklemore finished in the wet and dark, his abilities and appeal were pretty clear. Who can’t get down with struggles and redemption? Minnesota has seemed on that game recently. We’re a state where much of our populace has shifted their opinion in the last 15, 10, 5 years about who should have the right to be married. Macklemore’s “Same Love,” having been written for Washington’s 2012 Referendum 74, bubbled up into my Facebook feed a lot in the last year. The crowd clearly felt a bond over that song—one only shared with 12 other states and the District of Columbia.

And so like “Thrift Shop”—in one way at least—a song can be a cultural moment. I have my doubts whether Haggerty and Lewis will be long-term hip-hop figures. Lewis seems focused on film as a future, and Macklemore? Near the Rolling Stone profile’s end, Hiatt includes a line that while not totally tangential, does seem a little odd to mention, as if also questioning the longevity of Macklemore: “Haggerty is pretty sure that by the time he and Lewis start their first arena tour this fall—which includes three Seattle shows—he’ll be financially set for life. ‘It relieves a lot of pressure,’ he says.”

But those are questions of someday. No one in the Grandstand seemed worried about anything but the now. They danced and rapped along under a ceiling-less sky.

After, on Twitter, young people declared it a perfect end to the summer, the perfect send off to college, the perfect point to remember the past and separated from what could be. On Saturday night, a night of rain, reflection, and the proclamation that change dances on fingertips, it was hard to not feel like we all can be redeemed.