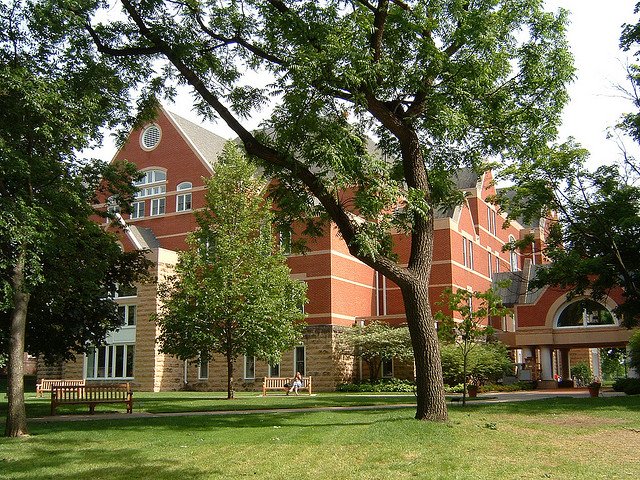 Students at Macalester College have once again demonstrated their ability to think constructively and enact change in the face of academic and artistic repression, even if the culprit is their own administration.

Months ago, Macalester College senior Elsa Goossen proposed a community art installation to the Macalester administration, to be on display during its 21st annual International Round Table. This project, which would take the form of a chain link fence decorated with student art and writing, was to highlight migrant experiences and bust myths surrounding worldwide borders. The administrative body approved the mock border wall, agreeing to place it on Old Main Lawn, the highest-traffic location on campus.

Three weeks ago, citing dubious concerns over student and community sensitivities, the administration changed its mind about both the length the wall would be allowed to stay and its location. Goossen and other organizers proposed many compromises, including a two dimensional “tape border” in the same area, obelisks (an historical border marker) leading from the originally accepted location to the new location, and multiple fence “sections” that would lead along and only partially bisect the walkway of the newly imposed location.

None of these last-minute compromises were accepted by the administration, despite its inability to provide reasons that student art of this nature should not be on display during an international event concerning migration. The wall was placed parallel to the walkway in a sculpture garden behind the Humanities Building (recently renamed “Neill Hall,” in honor of Macalester’s founder, a well-known misogynist and vocal antagonist of Native Americans), blocking the windowed outer wall of the Theater and Dance Building.

Students involved in the construction of the wall, including myself, knew something had to be done.

At 5 o’clock in the morning on October 10th, 20 students mobilized and moved the wall back to its originally proposed location. Their names were taken by Macalester Security officials, who proceeded to leave the scene and take no action.

Over the next 13 hours, students occupied the fence area, even in the 34 degree weather, to guard against further pushback. During that time, President Brian Rosenberg came out to view the wall, visibly ill-at-ease. The administration proposed many reactions behind closed doors, all of which were shot down in favor of a partial admission of defeat by Provost Kathy Murray at 4:41pm. According to one source, Dean James Hoppe came out shortly thereafter to tell students that they could go home, and that no action would be taken against those who moved the fence.

The wall still stands, guaranteed until 7am on Monday morning, at which point the fence will be returned to the rental company. Students are planning a celebratory taking down of the art on Sunday, and on Oct. 11, President Rosenberg expressed appreciation for student passion, reaffirming that there would be no retribution.

Despite this clear victory, many students are disappointed with Kathy Murray’s response, which cited their tired and dubious claim of sensitivity and put blame on the student action, which she said demonstrated that “A group of students decided early this morning that allowing other members of the community the opportunity to make that choice was not important,” according to Joe Klein and Amy Lebowitz’s online article in the Mac Weekly, published this Friday. Further, she claimed that this decision was made to “eliminate further disruptions.”

Expect a counter-response from multiple students in next week’s Mac Weekly, addressing the initial controversy, the experience of student activism, and the administration’s inadequate response. Make sure to follow other local news for more information and community reactions, as well as the Mac Social page, www.macalester.edu/macsocial, from 10/09-10/11.

Once again, the mock border wall will be up with full artwork until the celebration Sunday evening.

Correction: A previous version of this story incorrectly stated when President Rosenberg expressed his sentiments to the students. He spoke with the students on Oct. 11.