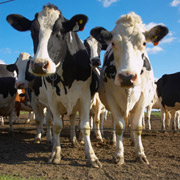 Dairy farms in both Minnesota and Wisconsin are picking up on a technology that is moving out of the labs and onto the land: anaerobic digesters that turn animal manure into electricity and cash for farmers.

Essentially, farmers load their cow manure into large, sealed tanks on their property. Bacteria in these tanks break down the manure and separate it into biogas (which is mostly methane) and solid and liquid waste. The biogas can be piped to a generator to create electricity and heat or to a boiler to produce just heat. The remaining waste can be used as soil fertilizer for crops or as animal bedding for the cows. And without the methane, the reused manure doesn’t have that distinctly, how should I say, unique smell.

The electricity produced from the biogas can be used on the farm or sold to local power distributors. After installing digesters in 2008 and 2010 at three farms in Stevens County, Minnesota’s largest dairy company, Riverview, sells the electricity it produces to Great River Energy. Riverview’s digesters produce about 3.6 megawatts, or enough electricity to power about 2,740 average American households.

This partnership also greatly benefits Great River Energy who, thanks to Minnesota’s Renewable Energy Standards (RES), is required to produce 25% of the electricity it distributes from renewable sources by the year 2025.

So why does this process that provides a renewable energy source, prevents a highly potent greenhouse gas (methane) from entering the atmosphere, reduces farming costs and puts cash into farmers’ pockets, and helps utilities meet their RES requirements not implemented on every farm in the state?

As with most emerging technologies and renewable energy sources, the answer is economic. Despite the financial benefits the digesters bring, the cost for getting a digester up and running can be $1,000 or more per cow depending on the size of the farm. While larger dairy operators like Riverview may be able to afford this investment, smaller farmers may have difficulty coming up with the cash.

But this technology is not going away and may even expand into other industries. Research is being distributed to food companies in Minnesota that highlights the possibilities of using food processing waste to feed anaerobic digesters. The University of Minnesota-Crookston recently released the Northwest Minnesota Methane Digester Feedstock Inventory, which lists potential digester feedstock sources. And large companies like American Crystal Sugar in Moorhead, MN have already experimented with the process for their own waste products.

Leadership at the state level, in ways highlighted in this recent Brookings Institute report, will be critical in facilitating the uptake of anaerobic digesters throughout Minnesota. Vermont has taken a positive step towards assisting its farmers and citizens on this issue, Minnesota can do the same.