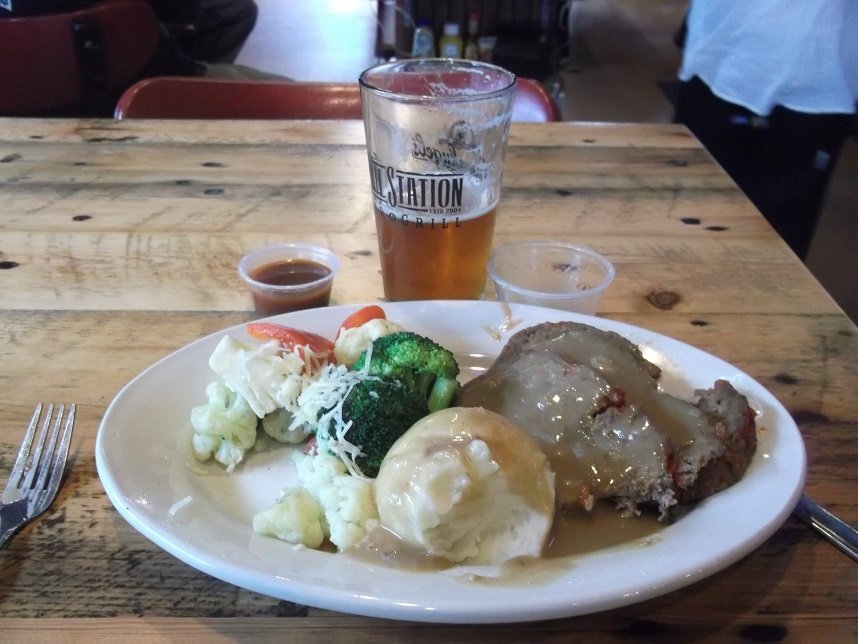 Making the second round of Longfellow’s eateries, I had lunch today at the Rail Station, corner of 37th Street and Minnehaha Avenue. Last time I’m pretty sure I had a baked fish dinner. Today, I didn’t want to repeat, so I went through the entire menu to see what appealed to me. I ended up in a section of comfort foods. And in that section I found a meatloaf and gravy dinner. Besides the meatloaf, what attracted me was there was an upgrade adding veggies to the base meal. So I ordered that.

The server asked for a drink order, and I looked around, wondering what local brew might be there. I said, “I suppose you don’t have Finnegan’s”. She said oh yeh they had it, so I told her to bring me a glass of Finnegan’s. If I’d looked harder, I would have seen it right on the wall. After Harriet brews, my second choice is Finnegan’s. It might not be in Longfellow, but it donates its profits to charity.

I know lots of people who are “into brewing” have very particular views about “what I will drink”. To me, I can find taste differences, but I just like everything I try, so the charity angle is the dealmaker for me.

An aside: My meter put the noise level between 70 and 75 decibels. Unlike some neighborhood places, conversation at the Rail Station muffled the pipe in music. Nearly the perfect result for me.

When my plate came, there were three meat loaf slices, some gravy on the side, a scoop of mashed potatoes, and then a side of veggies: Steamed broccoli, cauliflower and red sweet peppers. My mother so would have approved. It was sort of nostalgic for me. Back in the day, I used to enjoy sitting at a lunch counter in Woolworth stores and having exactly this kind of meal. Sadly, WalMart wiped out all the stores in the Woolworth’s tradition, so now if there’s food in a store at all, it tends to be fast food of some kind. Not like my youth when store food was like dinner at home.

Everything was good, but the veggies were better than that. I’d totally take that in place of fries, chips, or any of the other standard offerings of most restaurants. Let’s face it, today’s restaurateurs have not only not tuned into diners with my tastes, they’ve managed to wipe things off menus that are really better food. I’m glad Longfellow has at least one place trying to keep these foods alive. I enjoyed everything I ate and drank and gave a good tip. Oh, and the TV screens had two baseball games and a bike race. All the screens they have at Buffalo Wild Wings and not one bike race of beach volleyball event.

At top: Plate of meatloaf and mashed potatoes.