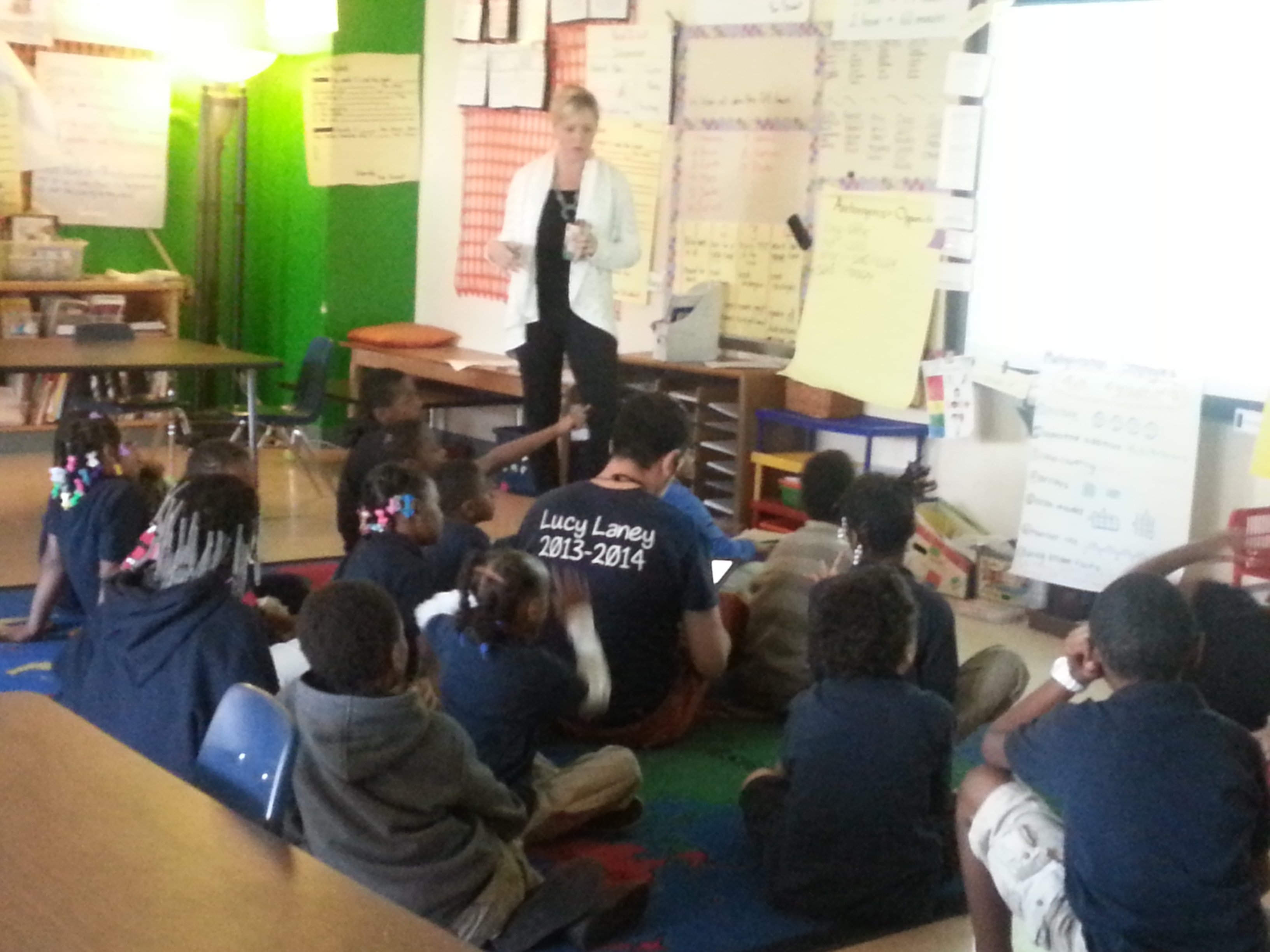 The classroom teacher, sitting on the floor, is Scott Teigland and the co-teacher is Sarah Stark (standing.) (Photo by Sarah Lahm)

Being the principal of a high poverty, inner-city school is not easy, and north Minneapolis’ Lucy Laney School principal Mauri Melander has the bite marks on her wrist to prove it. They are from a previous day’s encounter, she explains, and an example of what makes working at Lucy Laney challenging.

The constant turnover of the teaching staff is another challenge that Melander has to deal with as she works to build Laney, where approximately 90 percent of the students are working below grade level, into a strong, stable school community. This year, she said, she has seventeen first year teachers and few veterans.

When Melander found a strategy that helped improve both student performance and teacher stability, she wanted to do all she could to expand it. The strategy is co-teaching, which puts an additional teacher in elementary school classrooms for up to one hour and fifteen minutes per day. Currently, it is being used in many Minneapolis schools in an effort to keep children in their classrooms, rather than pulling them out for extra services and instruction.

The push to try co-teaching came from the district’s Teaching and Learning department about four years ago, according to Melander, as part of an effort to add middle school-style content specialists to elementary level grades. Melander says that, at the time, some of her colleagues were resistant to the idea, but as the principal of a school with “very underperforming” students, she could not say no.

Fortunately, she says, implementing co-teaching in fifth grade math classes, and later in third grade as well, “reaped positive results.” Test scores improved, and the Lucy Laney staff rallied around the extra support. In the 2013-2014 school year, the school received additional mid-year funds in order to boost student achievement, and they used it to add math co-teaching to kindergarten, second and fourth grades.

This positive boost to both student achievement and staff morale led Melander to ask the district for more funding for the 2014-2015 school year, in order to expand the co-teaching model to include literacy instruction. Initially, she says, she thought she could use her “own voice to morally compel the Minneapolis Public Schools to support” what she calls a “homegrown strategy.” The district said no, citing budgetary limitations.

Melander kept this information to herself, saying she did not want to “bring any harm” to her staff. Finally, at a professional development session built around the theme of racial equity, Melander broke down and told her staff that they were not getting literacy co-teaching at Laney.

Her staff responded immediately, saying Melander had to “share her burden” and bring the staff and school community into the fight to expand co-teaching. The school’s site council, which is made up of parents, staff, and community members, quickly got involved, too, to try and build on Melander’s push for further co-teaching support.

At one point, Melander says district CEO Michael Goar offered to support three of the six additional teachers necessary to expand the co-teaching model, but by then Laney staff members were informed and engaged, and told Melander that “three is not six.”

Rather than simply accept Goar’s partial offer, some staff members, along with Melander and other Laney supporters, went en masse to an April 22 MPS budget engagement meeting to make a public, emotional appeal for the full funding of six additional teaching positions.

At the meeting, however, MPS representatives Robert Doty, who is the Chief Financial Officer, and Suzanne Griffin-Ziebart, the Chief Academic Officer, told Melander and Lucy Laney staff and families that the district’s budget for 2014-2015 was already set. Funding an expansion of the co-teaching model would most likely not be possible. Griffin-Ziebart did agree, however, to visit with Lucy Laney staff to learn more about their concerns.

Melander says that, at the meeting, she was waiting for the district representatives to mention the three teachers that Goar had said would be possible to fund, but no one mentioned it. She is still hoping that those initial three teachers will be coming. Since the meeting, however, Melander says there has been no district response to her school’s request, and no clear information about how and where “greater decisions are made.”

In an interview held in a small conference room at Lucy Laney, Melander called the fight to expand co-teaching “one of the most emotional, personal battles” of her life. She expressed frustration, saying, “I feel like we say one thing,” by continually talking about the “achievement gap,” but are doing another thing by not following through on an approach that seems to be working.

Melander, who has been the principal at Lucy Laney for five years now, has deep roots in the Minneapolis Public Schools: she went to northside elementary and middle schools before graduating from Washburn High School, and has nearly twenty years of experience as a district employee, including years of teaching at inner-city schools such as Sheridan, Nellie Stone Johnson, and the former Broadway school.

She says she understands the deep emotional toll teaching can take and the draw teachers can easily feel, when daydreaming in a checkout line, for example, to move to far less demanding jobs. At Lucy Laney, teaching academic subject matter may be a luxury, given the host of other issues facing the school’s students and families, and thus the school’s teachers.

Throughout the school year, Melander says, the Laney staff and community is facing multiple real-world circumstances, such as a high number of homeless children. This year there are 126, or nearly 20 percent of the school’s population. Additionally, teachers must be prepared to deal with child protection workers, guardians, orders of protection, and being subpoenaed and having to testify in court. This, Melander notes, is exhausting, and she understands why a teacher told her once that being at Laney was like trying to hold back the Hoover Dam.

The extra demands placed on the Laney teaching staff are compounded by the fact that, according to Melander, the staff is very young. She described a meeting last year with a 25 year-old Laney teacher who was leaving for a different teaching job, in a less stressful environment. In the two years the teacher had been at Laney, she told Melander that she “hadn’t dated, had no time with friends,” and just couldn’t manage to have a life outside of her job. The intense emotional and personal sacrifices required of her had taken their toll, and there are few veteran teachers on staff to guide these young teachers.

Melander says she takes the constant turnover of her staff personally, and she marks it every year on a white board in her office. Each spring, during the hiring season, she puts an orange asterisk next to the names of the teachers who have gone out on interviews. “It’s painful,” Melander says, adding that she knows the teachers who are leaving feel “embarrassed” about their decision.

Melander’s desire to stop this pattern of burnout and turnover coincided with a 2013 visit by district CEO Michael Goar, who liked the co-teaching he saw taking place at Lucy Laney. According to Melander, he then encouraged Maggie Sullivan, who is the head of the district’s “Human Capital” department, to come to Laney to find ways to improve retention rates at the school. Sullivan sat down with Laney teachers to find out what their working conditions were like and why so many end up leaving; this was the first time, Melander says, anyone had ever asked her staff what they thought.

Out of these conversations between Sullivan and the teachers, Melander says co-teaching kept coming up as a positive strategy. Because of this, and because Melander says Sullivan had been told to come up with a plan to improve morale and turnover, Melander was under the impression that the further implementation of co-teaching was a “high possibility.” No one ever told her it was “for sure,” she says, but she believed that there was “momentum behind the model.”

She found out, however, at the end of March, just before the district’s budget priorities were made public, that there were no funds available to support the model. This led Melander to launch her private battle with the district to get the resources she needed. After getting no results, and attending a racial equity meeting with staff members, she says she knew she could not let the opportunity to further implement co-teaching “quietly slip away.”

In fact, Melander says, “Pandora’s box had been opened with the gains” Lucy Laney staff and students were experiencing, and if the money was not going to be coming to further support it, then Melander wanted this to be publicly disclosed. She determined that a “public denial of a promising model for our most struggling students, staff, and neighborhood” would have to be made.

Since the April 22 budget engagement meeting, the Lucy Laney staff has been trying to figure out how to expand co-teaching without further financial resources. This is what Melander calls a “defining moment” for her, as she says she feels very strongly that it is her job to “work towards the greater good.” She pays her bills through her work, she says, but is not willing to profit off the failure of the school system.

Her teachers, for example, offered to go from four third grade classrooms down to three to free up money in the school’s budget for the extra literacy teachers, which Melander says is not an ideal scenario. Melander is also considering cutting some support staff positions in order to free up additional money; she is trying to rationalize this, she says, but it still feels like “Sophie’s Choice” to her.

Melander understands that the district does not have the resources that everyone needs, and that, while she has not explicitly been told that the co-teaching model will not be expanded next year, she knows that to do so would involve money being taken from somewhere else. Still, she mentions feeling as though she is being told to “figure it out,” when around her she sees struggle and crisis. The needs in the building, she feels, are enough to warrant extra resources. One teacher, she said, recently summed up the challenge in a rhetorical question: “Don’t people know how much farther we have to go to get more academic success or proficiency?”

CORRECTION 5/13/2014: Mauri Melander was the assistant principal at Lucy Laney for three years before becoming the principal two years ago.