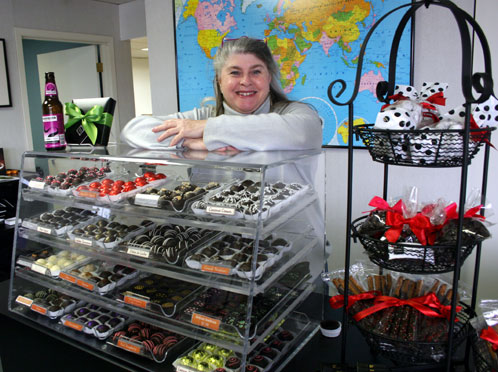 Valentine’s Day wasn’t so sweet this year for Mary Leonard, owner of the Chocolat Celeste.  Leonard saw $20,000 in fewer sales, which she attributes to her business’ move from University to Transfer Road – a move she says was necessitated by LRT construction along the Central Corridor. Leonard was one of several small business owners and St. Paul residents that shared testimony at a public hearing March 16.

The hearing at Goodwill Easter Seals in St. Paul was one of two that took public comments on a recently released supplemental environmental assessment about the potential impact of LRT construction on business and residents along the Central Corridor. The assessment came out of the January 26 ruling by U.S. District Judge Donovan Frank on an NAACP lawsuit.

Leonard moved her business last year to Transfer Road. Since Valentine’s Day is her biggest sales holiday of the year, she put up signage on her old location last month just in case her returning customers were unaware of the move. However, the week of Valentine’s Day, the parking meters in front of her old store front were hooded, and the sidewalk was closed.

“I believe I lost a significant amount of business because people thought I was there, but couldn’t get there,” said Leonard. “I saw 40 percent less sales this year – $20,000 might not seem like a lot of money, but it’s how I survive for the rest of the year.”

Leonard said she believes in the light rail, but doesn’t feel that small business along University can survive construction without support.

The concern over business survival was a common theme from every small business owner sharing testimony Wednesday evening before representatives from the Federal Transit Administration, the Metropolitan Council, the Central Corridor LRT Project, and an audience of about 70 people.

Emotions flared at times during the hearing as numerous business owners and residents questioned the methodology used and conclusions drawn by the report – namely, the supplemental environmental assessment’s conclusion that potential impact on revenue for small businesses during construction along the corridor would range from zero to 2.5 percent.

“The reality is that businesses are going to lose 20, 30, 40, 50 percent of revenue,” Ax-Man owner Jim Segal said to the panel listening to testimony. ” I want you to look at my face and remember the fact that every night I lose sleep about how I’m going to raise and feed my family, send them to school, give them the opportunities they deserve, because a government project is putting my livelihood at risk.”

Segal called the supplemental environmental assessment a contempt of court.

“You are basically raising your middle finger to Judge Donovan and telling him ‘we don’t really care what you think. We’re going to put something on paper so we have something.’ But there’s no substance. Reflect on the fact that there are going to be actual damages, and come up with a plan to support us,” he said. 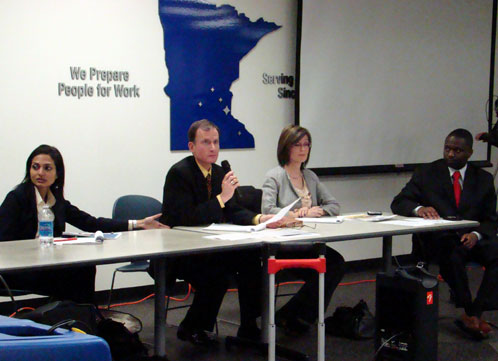 The report calculated the estimated zero to 2.5 percent business revenue loss based on four business classifications outlined in a 1993 study of business impact from highway construction in Texas .

“I find the business classifications totally unbelievable,” said Larry Peterson, an attorney whose law office is located along University Ave.

“They find only 25 food stores along the entire 11 mile stretch of the Corridor, I think that’s a false statement. They find only six general merchandise stores and three furniture stores out of 947 businesses – that’s just ridiculous. These are just false numbers used to justify a zero impact,” he said.

Peterson also took issue with the construction impact studies that were used as a model of comparison – two Wyoming highway studies, and two Texas highway studies.

The narration in the supplemental environmental assessment explained that these were chosen because “only four studies since 1990 were identified that used objective data to attempt to quantify the construction impacts on businesses that abut the construction of transportation alignments.”

Peterson doesn’t buy that, and points to studies in Seattle, and locally of the Lake Street rebuild that he thinks would offer better models of comparison.

He also points to business in St. Paul’s Lowertown, where LRT construction started two years ago.

“The Lowertown businesses were virtually demolished. The data’s right there – a 20 to 40 percent loss in revenues by the liquor stores, the Mastercraft frame store, the bars, the restaurants, and the landlords,” said Peterson. “We’re also tracking the over 20 businesses that have left the avenue, and there’s another ten that went out of business. There’s substantial losses that have already occurred.”

When Swank closed its doors on January 31, Inna Valin says she lost more than her job. “‘I’ve always collected vintage items, and when I started at Swank, it felt like I had finally found my community of people – it was kind of like I found my home.”

During her testimony, Valin described the neighborhood where she worked as a place where people supported each other. “We used the sign company at one end of the block, and the coffee shop at the other end of the block. We bought from the local liquor store.  It was a natural community – not a government planned community like you are trying to create.”

In June 2006, the District Councils Collaborative of St. Paul and Minneapolis announced strong support for the Central Corridor project as a “once in a lifetime” investment.

“But we also cautioned that we need you to do it right, which is why I’m here this evening, to share community concerns that the project is not providing sufficient business mitigation measures,” said Karen Inman, a DCC board member from District 7, during her testimony.

Inman expressed that funding for LRT communications efforts and outreach should not be included in the same budget as business mitigation, and called for a financial report on how much funding actually went directly to small businesses.

She said the format of the February 17 community meetings did not advance public understanding of the supplemental environmental assessment and undermined public trust.

“Community members were extremely frustrated with the open house format that did not allow people to speak or have questions answered for the entire group.  It was not a town hall as promoted in the press release. One-on-one conversations lacked transparency, and made it difficult for community members to hear other perspectives,” she said.

Patricia O’Keefe, a 30-year resident of Midway, added her concerns and support for area businesses, but also raised the question of accessibility for elderly residents and people with disabilities who do not have cars.

“How are we who live in the Midway going to get to our local stores with light rail in the middle of the street? A lot of us walk, some of use electric wheelchairs, or scooters. My husband is in a wheel chair. How are we going to get across the intersection?”

MICAH, a faith based affordable housing nonprofit in the Twin Cities has not taken a position for or against the LRT project, but staff members John Slade and La Shella Sims attended the hearing to share their concerns.

“Mostly what I have seen so far is that any possible negative impacts have been minimized or ignored,” said Slade. He expressed concern about how the involuntary dislocation of residents and businesses might change the character of the neighborhood.

“We see housing and small business as intimately connected. The African American community that built up Rondo – the Asian, Hmong, Vietnamese and others that rebuilt the east end of University, the Somali and Oromo who are moving into the community – all have ties between housing and business.” said Slade. “Without concrete and significant remediation for both small business and housing, this project looks to bulldoze these communities economically.”

Sims said she’s concerned that once the small businesses are driven out, only big chains will be left.

“What’s going to happen to the people that are here now?  The small businesses here are expressing a need for fairness and justice for all – and they are owed no less than that.”

The Federal Transit Commission (FTA) took over media relations for the hearings. They did not comment on questions from the TC Daily Planet about concerns raised by business owners and residents during the hearing.

The following statement was instead issued by Brian Farber, associate administrator for communications and congressional affairs, “The purpose of this comment period is to gather input from the community and FTA will consider the residents’ views before issuing the final Environmental Assessment document.”