Last summer, I found out that the Lowry Bridge bike lanes initially planned were not up to the standards that I had hoped to see – nor did they meet what many bicyclist groups had wanted, nor did they pass muster in accordance with long-term plans for Lowry Avenue. So I did a rather extensive post (linked above) about the topic. What followed was a result that affirms why I put so much energy into both reading comprehensive area planning documents, and blogging about them as best as I’m able.

Obviously in this case I wanted to see a better design for bike lanes on the Lowry Bridge. But after the initial post I did not have the time, energy, wherewithal, or connections to see things through to a full and successful end goal. Others did. The Minneapolis Bicycle Coalition and a whole host of other cycling activists began a dialogue with Commissioner Stenglein around how to improve the bike lane designs. That dialogue has proven successful, and I’m told that the bridge will have “slip ramps.” 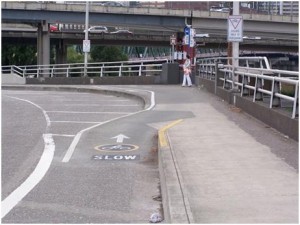 An example of a slip ramp, although the lanes on the Lowry Bridge will be much wider. (Photo from the Minneapolis Bicycle Coalition blog)

In a poetic twist, the bike lane pictured above is from the Hawthorne Bridge in Portland, Oregon.

So thank you to Commissioner Stenglein, the Minneapolis Bicycle Coalition, and anyone else who helped the Lowry Bridge get much-improved bike lanes! And check out the coalition’s post for the specific details about how the lanes came about and how they will work.

We always knew the Lowry Bridge would be well-built, but now we can rest easier knowing it will be built right.