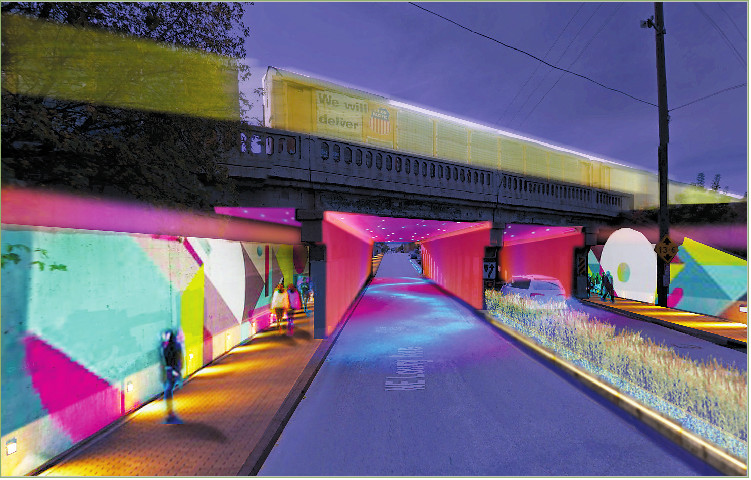 The graphic [above] is what-if for handling the railroad bridge over Lowry near Washington. Flood Plain Collective, Anna Bierbrauer and Miss Emily Lowery, who created the graphic were on hand at the last public meeting in the neighborhood prior to the Hennepin County Board’s upcoming vote on plans for Lowry Avenue Northeast.

Having these plans can enter the project into funding cycles for both the county and city, the start of changes forecasted at least five years out. “We can’t jump ahead of others that are already in line,” said Carol Anderson, the county staff person on the project.

When planning started, residents and officials made clear they weren’t interested in acquiring land for amenities like trees and bike lanes. So the plans show narrowing the street to one lane each way with a turn lane in the middle, in order to widen sidewalks, add trees and a bike lane in each direction.

There’s an option for “green infrastructure” where not only are there trees, but visible containers that help capture rain water and hold it until it the tree roots and other landscaping can absorb it.

Those who attended could vote on four different themes for “aesthetics:” Industrial aesthetic, urban eclectic aesthetic, traditional/historic, or contemporary.

At three major intersections, planners looked long-range to redevelopments. At Lowry and Marshall, River Liquor’s corner would give way to a mixed use development with retail on main level and housing above. But the shape of the intersection would not depend on this happening.

At Lowry and University, they accommodate the truck traffic coming from Shoreham Yard by widening the turning radius to avoid running up on the curb or plowing into Stanley’s, which remains. Lowry would dip to the south at that intersection, reminiscent of the wavy Lowry in North Minneapolis, and require acquiring land.

At Central Avenue, the former Kroger’s Korner building site before it burned, would be redeveloped with multi-story housing (where Cultivate Northeast is now). The northwest corner (Mecca Linen) is also shown as a redevelopment area, along with the houses along Lowry for the first block to the west.

Extensive graphics will be on the project website eventually, at www.hennepin.us/lowry. A rendering of the green infrastructure option is [in the slideshow above].