“Sometimes it’s not you that needs a change, it’s your environment that needs the change.”

That’s about the only way to explain why in 2001 a chef born and raised in warm and sunny Miami made the “radical” decision to move to the less than warm metropolis of Minneapolis. So that’s what Chef Patrick Matthews did; and the growing legion of fans of his menu creations at Louie’s Wine Dive, 800 W. Lake St., Uptown Minneapolis, are thankful for the decision.

Louie’s (www.louieswinedive.com/minneapolis) opened this past May to rave reviews with foodies loving Matthews’ take on classic American comfort cuisine. Though the menu at Louie’s is ever evolving – “I just love to get in the kitchen and create,” explained Matthews, the chef and co-owner of Louie’s – staples and foodie favorites are the braised short ribs, crab cakes, shrimp diablo and the grilled bone in pork loin chop (just seeing one of those coming out of the kitchen immediately turns heads). 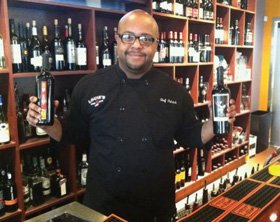 Matthew’s, who has a degree in culinary arts from Johnson & Wales in Miami, said coming to Minneapolis was just what he needed to do to grow as a chef and as a person.

“Minneapolis was a logical place for me to come and to learn from some great chefs and it also gave me a chance to stand out,” said Matthews.

The list of great chefs and restaurants Matthews worked with and at is certainly impressive. Matthews has done kitchen time – mostly in the demanding role of sous chef – at some well-known places, including Wolfgang Puck’s 2021, Babalu’s, Axel’s Bonfire (Roseville), Crave (downtown Minneapolis), the Dakota Jazz Club and Aperitif Restaurant. At Aperitif, Matthews was the executive chef and under his directions the restaurant was named to the 2010 list of Best Things to do in the Twin Cities.

“Around then (mid 2000s) this was a great time. This was the time when the bigtime chefs were taking an interest in the area,” said Matthews’ who worked under Puck and other known chefs such as Jack Riebel (Dakota). “All those experiences translate to the things we do here at Louie’s.”

Though Matthews dreamed of opening his own place, becoming chef and co-owner of Louie’s came out of nowhere. 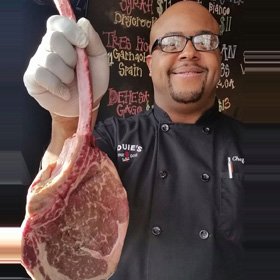 “For me it was kind of a chance happening,” explained Matthews. “I had a conversation with a guy from Kansas City (where the Louie’s brand started) and the conversation was about pride over profits. A short time after that I was offered the opportunity to become chef and part owner. At the time I was working at the St. James Hotel and it was a pretty good position for me, but I decided to take a chance. I decided it was time to step out from the shadows so to speak.”

With a prime location on Lake Street next to the iconic Bryant-Lake Bowl, Matthews (and Louie’s) is far from the shadows. Anchoring a newly-built luxury apartment complex, Louie’s has become a neighborhood hangout, but diners from far beyond Uptown are regularly making their way to Louie’s for lunch, happy hour, dinner or weekend brunch. And as the name suggest, Louie’s has an extensive wine selection (as well as a full bar) and an on-site sommelier (a trained wine professional) to suggest food and wine pairings and discuss all things wine related. Thursday through Saturday evenings Chef Matthews offers four course dining with accompanying wine pairings.

“What I want Louie’s to become is an institution where people can come as they are and commune over a nice plate of food,” said Matthews.