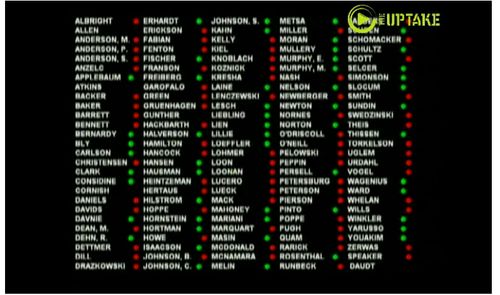 Since our world headquarters in sunny Maynard is nestled in one of the flipped House districts, Bluestem still has a pile of 2014 Independent Expenditure political junkmail sent by the friends of both MN17A candidates.

We also saw the pile of mail sent against Mary Sawatzky in MN17B, and heard both Republican candidates speak out against it.

But when push came to shove, both Tim Miller (R-Prinsburg) and Dave Baker (R-Willmar) voted against a motion that would allow more transparency about who’s ponying up for the personnel, printing and postage for those postcards.

Mike McIntee at The Uptake reports in:

Rep. Ryan Winkler (DFL) asks that the Minnesota House suspend the rules and vote on H.F. 43,a bill that would close a loophole in campaign finance law that allows non-profit groups to hide their political spending. Republicans argued that the bill needs to go through the committee process. Winkler said that would prevent it from becoming law in time to meet a January 31st deadline for reporting spending on last year’s election.

In a press release Winkler said:

Under current law, non-profit political organizations do not have to disclose the information of their donors like other political party units and independent expenditure groups do.

Norm Coleman’s political action committee, Minnesota Action Network (MAN), falls under this category. As of October 31, the group had spent $337,532 and had $507,986.44 in the bank. And MAN has already begun mailing political advertisements into several districts in Minnesota since the New Year. Unless Norm Coleman voluntarily discloses his donors, the public will never know who really funded these communications.

The bill failed on a 54-76 vote with most of the no votes coming from Republicans. The bill is waiting for a hearing in the House Government Operations and Elections Policy Committee.

Screenshot: the vote on the Winkler motion.