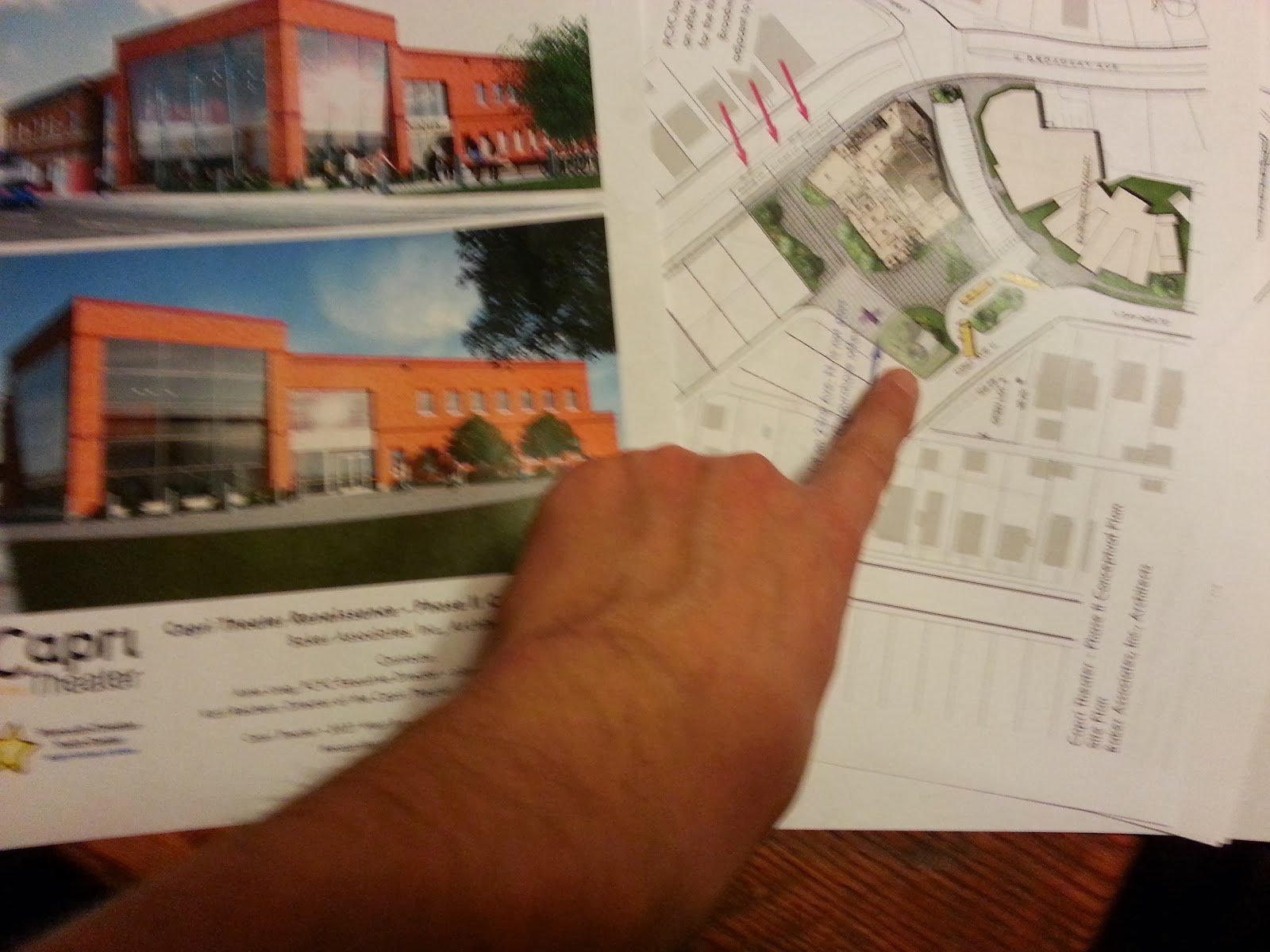 At a recent community meeting, the Capri Theater presented its proposal for an expansion of their current building. Overall, these changes are excellent, and especially as someone who lives around the corner I cannot wait for them to happen. In fact, a main issue with the upgrades is that the fundraising needed will likely mean that we’re at least a year or even two or more away from breaking ground.

*Disclaimer* Some of the events described below occurred at a Jordan Area Community Council housing committee meeting.  I was recently elected as Board Chair for the organization, and my comments are my own opinions, and not the position of JACC unless expressly stated as such.

Even though the Capri has already won accolades for its jazz venue, changes like adding dressing rooms and more performance and gathering spaces will greatly enhance this community asset. But there’s one thing that has me concerned, and that’s the lonely little bungalow on 23rd. Quite a few other houses have already been demolished in this area, and that bungalow is the only one left. It’s currently owner-occupied, and has been for many years. The house in no way could be called a blight, and is actually very well-kept. With plenty of vacant lots even right across the street, getting this structure moved should be a basic prerequisite for the development.

To their credit, Anne Long and other Capri representatives have said exactly that. Their preference is to preserve the house and move it to one of the nearby vacant lots. But at the Jordan housing meeting, they punted somewhat by saying that such a move would be dependent on the developer and the overall proposal. The city of Minneapolis is in talks to acquire the property from the owners, who by all accounts are willing sellers.

So far so good, right? Well, not to this justifiably nervous preservationist. After all, the city already used the Capri expansion as an excuse to tear down one clearly viable structure.

Right now, all the right people are saying all the right things about preservation here, but nobody is standing up saying, “The buck stops with me. Either this house is saved and moved, or the project doesn’t happen.” If we’re lucky, no one will NEED to step up in that way. If we’re unlucky, here’s how a demolition scenario plays out in my mind’s eye:

The city acquires the property with the intent to move it if at all possible. But goshdarnit, there are all these pesky policies in place that make moving a house so difficult. And instead of examining whether these policies are necessary, beneficial, or useful, not to mention realizing that they are the ones who can make or change policies, bureaucrats instead check their boxes on all the right forms and tell themselves that they tried to save the house, but you know, some of these structures just can’t be saved.

Meanwhile, over at the Capri, the development RFP (request for proposals) goes out in Finance & Commerce and the usual suspects who look for bids send in their applications. The RFP and bid process includes a preference for saving the house, but without a specific requirement. The bidders, all fine and reputable companies who will do an outstanding job on the new construction, don’t have the contacts or expertise on house-moving. So the bids or at least the top bids have demolition as the only proposed action for the house.

Then the City, the Capri, and perhaps neighborhood or other community groups look at the proposals and pick one. But by the time it gets to that point, the only choices are between development A, B, or C. There is no opportunity to say, “I like B, but could it be tweaked in any way?” And since it’s an up-or-down decision, and since the Capri expansion will be a boon for the community, everyone picks a good proposal and decides to run with it.

At the end of the process, everyone along the way did exactly what their prescribed role was. They all wanted to save the house, but it wasn’t anyone’s job to do that part. No, everyone along the way had a role in following their part in a process. So with a collective shrug, they all say, “Well, we wanted to save the house, but we followed a process and that process got us a great development even if the house has to be torn down.”

Without either a line in the sand about preservation, or a recognition that overall processes are deficient, I fear that is exactly what will happen. The line in the sand route is overly (although sometimes necessarily) confrontational. Since we have a few years before that particular parcel will be needed for the development, it’s time to use the Capri expansion as a reason to take a hard look at some of the processes that can discourage or limit preservation.