Education has for long been touted as the gateway for Africa from the vagaries of a poverty laden fate. The importance of education is highlighted by the second of the eight Millennium Development Goals (MDG) agreed upon by the United Nations (UN). “Ensure that, by 2015, children everywhere, boys and girls alike, will be able to complete a full course of primary schooling.” This is not the first time we have heard about the indispensable nature of education and it’s declaration as a fundamental human right. Indeed Education for All (EFA) was launched in 1990 with international agencies such as UNESCO and the World Bank among others spearheading the effort to educate all citizens in every society. Such efforts have materialized in some developing countries in fact there has been some form of universal primary education system established in Burundi, Ethiopia, Ghana, Kenya, Malawi, Mozambique, Tanzania and Uganda. This initiative has resulted into a dramatic surge in primary school enrollment.

While the excitement often revolves around the millions of students being enrolled, it is critical that we look beyond the statistics and conduct a result oriented evaluation. Providing any form of food to a famine stricken region is critical-however, providing a balanced diet is a result oriented approach that will diminish the occurrence of malnourishment and disease. A child can go to school and not get an education- resulting in malnourishment of the mind. Education has opened doors and improved the livelihoods of many Africans. Unfortunately, the continent as a whole has failed to break away from the shackles of poverty. Considering the resources that have been invested towards this cause-it is legitimate to argue that the overall expectations have not been met. What went wrong? 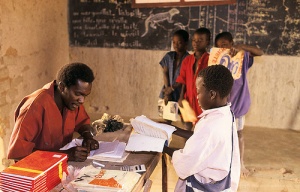 The failure of education to maneuver Africa over the hump has mostly been a result of two weaknesses, ‘what we are teaching and how we are teaching.’ Many who have attained an African education will note that not only is it a contest for memorizing and regurgitating facts and figures, the curriculum is also primarily made up of western based material and concepts. Eurocentric education is the term often used though it doesn’t do justice to this phenomenon in today’s world. It is worth noting that western education is not bad-in fact basic science and mathematics have a universal application. Where we go wrong is the applied curriculum which is often too distant from the realities of the African people. I went through a similar education in the early years of my life and had a strong background in the curriculum taught in Uganda’s schools. On a selfish stand point, the system was beneficial for me because I have spent half of my life studying and working in the western world. However, most of the Africans who remain in the motherland do not benefit from concepts that they will never experience as well as lack the capacity and resources to put into application.

This is not an argument against teaching a western style education and neither am I making a case for Afro-centrism. Tea always tastes sweet with some sugar in it, but too much sugar can be bad for you. If our intention is to equip a population with the knowledge base that will enable them to optimize the resources and tools at their disposal, it is imperative that we focus education on our immediate surroundings. Many will argue that the world has changed, with globalization and the technological age-the world is rapidly becoming a global village. However, resources continue to be skewed and are not trickling down as fast to make the technological breakthrough and shared knowledge beneficial for the developing countries. We have millions of un-employed highly qualified and educated Africans sitting in limbo from lack of job opportunities. Our immediate complaint is dissatisfaction with our governments for lack of job creation. However the fundamental failure and root cause of this quagmire is teaching the wrong material and an education system that often fails to foster independent thinking.

I can still recite some of the material I learnt in school about the Prairies of North America and the Rhinelands of Europe. Towards the end of secondary school, I was an expert on how a plantation on the Prairies operated but had no clue about the state of agriculture in my country. We sat through numerous lectures on how combine harvesters operated, agricultural techniques that allowed maximization of production amid harsh winters among other modern agricultural practices. I have been on road trips in North America and driving through the Prairie States strikes home this message. I found myself more knowledgeable from my education background about these farms than some of my friends who were local residents. The same applies to other disciplines such as history and literature-where I can only remember Chinua Achebe’s “Things Fall Apart” as the only novel we covered in class by an African author. The foundation of the an African education is so flawed that by the time students attend institutions of higher learning-the stage has already been set for disaster. It is high time we emphasized techniques and practices that will benefit students when they return home to make a difference in their livelihoods.

This phenomenon could have larger implications than immediate failure to turn knowledge into production on the local scale. The concept of brain-drain is often talked about as accounting to the diminishing returns of free universal primary education funded by many African governments. If you are teaching a student how to operate a plantation in the western world, they will try to find a job in the west to apply that knowledge. Likewise if we are teaching nuclear physics in our universities, it should not come as a surprise that students in this field are opting out-to search for greener pastures where this knowledge and expertise can be put to good use. Why should an African with a Doctorate in nuclear physics hang around Burundi for the rest of his life? Why should a Kenyan studying astronomy aspire to work in Nairobi instead of securing a position with NASA? We are teaching our children the skills of engineering and have no cars for them to fix. You reap what you sow.

The African continent is becoming a production line for experts who have no clue how to solve African problems. ‘Educate your people so that we can employ them’ is a flawed policy. We are even importing mosquito nets from nations that have no mosquitoes. How on earth do we expect to jump-start our economies and raise the poverty threshold in our nations-when we lack the creative mindset and expertise to solve local problems. We have lived for thousands of years on our lands and should focus on becoming experts in our affairs. We can cherry pick what we need from the western school of thought while spending the majority of the curriculum developing the ‘African State of Mind.’ It is imperative that we keep an eye on the global dynamics, while reigniting the flame of local expertise.