After coining the nickname “Murderapolis” in the 90s, Twin Cities news sources continue to heavily report on Minneapolis crime rates and criminal acts – especially in regard to homicides.

As of June 6, according to a crime statistics report compiled by the City of Minneapolis, 21 homicides had occurred in Minneapolis, year to date. Three more shootings raised the number to in the past week have raised the total to 24.

Seven of the year’s murders occurred in the first few weeks of January, prompting a vast amount of media coverage.  Headlines such as Another deadly night in Minneapolis and 5th Minneapolis murder in a week Friday night dominated local television and newspapers. This week, too, the quick succession of three shootings focused public attention on homicides in Minneapolis.

Crime reports can be some of the most sensational items included in a news broadcast or publication, but isolated incidents don’t give a full picture. News media often rely on statistical information to provide context to a story, but how can you know what the statistics mean and when they are significant? 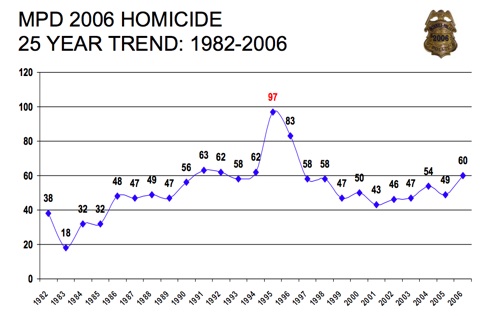 The cities of Minneapolis and St. Paul, as well as the FBI, offer crime statistics and resources on their websites.  A crime report often includes statistics as factual support, but it can be difficult both to locate statistics and to understand what they mean.

Statistics come from many sources, and depending on how they are looked at, or reported, they can lead to very different conclusions. For example, what is the meaning of eight robberies in a week in a single neighborhood? One person robbing eight people is a notable story about an individual outlaw, while eight people each robbing one person is a rise in overall crime in the neighborhood.

“Simply looking at these [statistics] may not provide the snapshot in time or a clear context for what is happening,” he said.

For example, Schnell said, an area with high theft rates is likely to be in a spot with high concentrations of retail spaces – not necessarily in people’s backyards.

Another example, he said, is the downtown area.  There are more people, more vehicles and more parking ramps – again an area of high concentrations.   When people think about factors that contribute to the formation of the statistical data, it is easier to understand crime in their neighborhoods.

The City of Minneapolis website provides statistical crime data for Minneapolis from 1998 to present, with the most recent information being the most helpful and in depth. Starting with the year 2000, the MPD has monthly and quarterly reports on this page, with some posted in both Adobe PDF and Excel spreadsheet form.  There is some variance in the information from year to year. For example, there is no report for January 2008, while 2009 and 2010 do have January reports.

The PDF files of monthly statistics from 2000 to the present are charts listing each neighborhood on the left and the various crimes across the top.  The chart provides a seemingly complete record of the number and types of crimes committed in every neighborhood for every month. 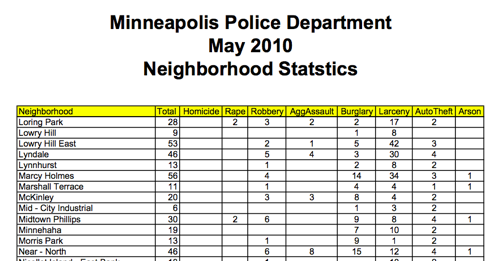 Crime data is recorded in two different ways.  The first is at the department level. The MPD uses a system called CODEFOR Statistics.  This system tallies each offense committed in the actual month it was committed.  The second way that crime data is recorded is the federal Uniform Crime Report (UCR) Statistics.  This system tallies only the most major offense in the month that it was reported.

An MPD report from January 2001 uses this example to clarify the difference in systems:

A victim reports on August 1 that her apartment was broken into, her purse and cash were stolen and that she was raped and that crime occurred on July 31.  The UCR will count one offense of rape (the most serious offense) in August (the month reported).  CODEFOR Statistics will count one rape, one burglary and one theft in July.

Although these two systems use the same categories to define crime and each is accurate, because of the different counting systems, direct comparisons cannot be made and results may vary.  The MPD statistics found online are from CODEFOR reports.  The UCR Statistics are given to the FBI for the compilation of national crime data.

The MPD also produces crime maps by precinct for each month. The maps are separated into two files – one for violent crimes and one for all others.  Within each file, balloons mark where each crime occurred. The balloons are color coded for type of crime. 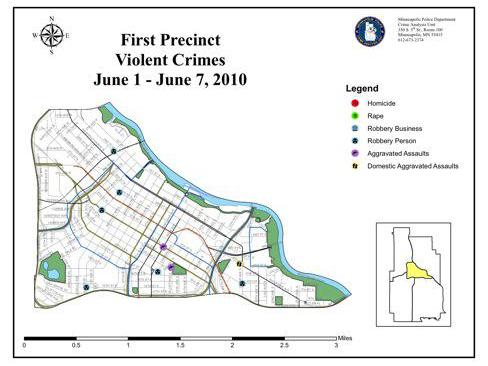 The crime data on the St. Paul Police Department (SPPD) website is contained in one report that ranges from 2005 to 2009 and is not broken down by neighborhood.  The report is found under the St. Paul Police Department (SPPD) portion of the City of St. Paul site and is divided into two reports – one for actual offenses and one for reported offenses. Crime maps show monthly crimes by type of crime a

A reported offense, according to Schnell, is any offense that is reported by someone.

“We may get a call and the person calls from an apartment building reporting a domestic [disturbance] and it gets investigated [by police] and it ends up being a brother and a sister arguing,” he said.  “It’s not a crime to argue.”

Since there was no crime, it is not an actual offense, only a reported offense.  An actual offense would be documented by the police officer as a crime upon investigation.

St. Paul’s online statistics follow the UCR format, and show percentages of increase and decrease over time.  For example, the actual offenses report for 2005-2009 indicates there were 88 homicides total and there was 37.5 percent decrease from 2005 to 2009

St. Paul crime maps can be viewed by month from 2008 to present, and also by year from 2004 to 2008.  The maps are broken down into 32 to 40 block sections and are color coded for the number of crimes committed in an area.  There are different maps for different types of crime – one for aggravated assault, rape, theft, etc. 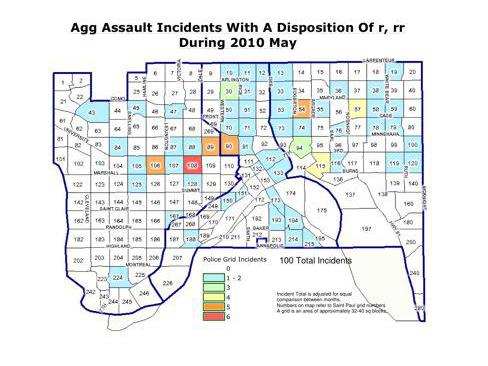 The site also offers a list of crime definitions to help viewers understand what constitutes certain crimes.  For example, criminal homicide is the willful, non-negligent, killing of one human being by another.

On the national level, the FBI website allows access to UCRs, hate crime statistics, law enforcement officers killed or assaulted, and other crime data for individual agencies, the states and the nation.

Most recently, the FBI released a preliminary report at the end of May 2010 showing that violent crimes declined nationwide in 2009, despite economic hardships, violent crimes fell in 2009.  The largest murder decline, at 7.2 percent, was in cities with populations of 500,000 to 999,999.  The report showed a general decline in murder in larger cities and an increase in smaller cities.

Recognizing the potential for statistical data to be skewed, the FBI added the following disclaimer to its crime report:

Figures used in this Report are submitted voluntarily by law enforcement agencies throughout the country. Individuals using these tabulations are cautioned against drawing conclusions by making direct comparisons between cities. Comparisons lead to simplistic and/or incomplete analyses that often create misleading perceptions adversely affecting communities and their residents. Valid assessments are possible only with careful study and analysis of the range of unique conditions affecting each local law enforcement jurisdiction. It is important to remember that crime is a social problem and, therefore, a concern of the entire community. The efforts of law enforcement are limited to factors within its control. The data user is, therefore, cautioned against comparing statistical data of individual agencies.

It’s all about what the data really means, Schnell said, and with the resources offered people can dig in deeper.