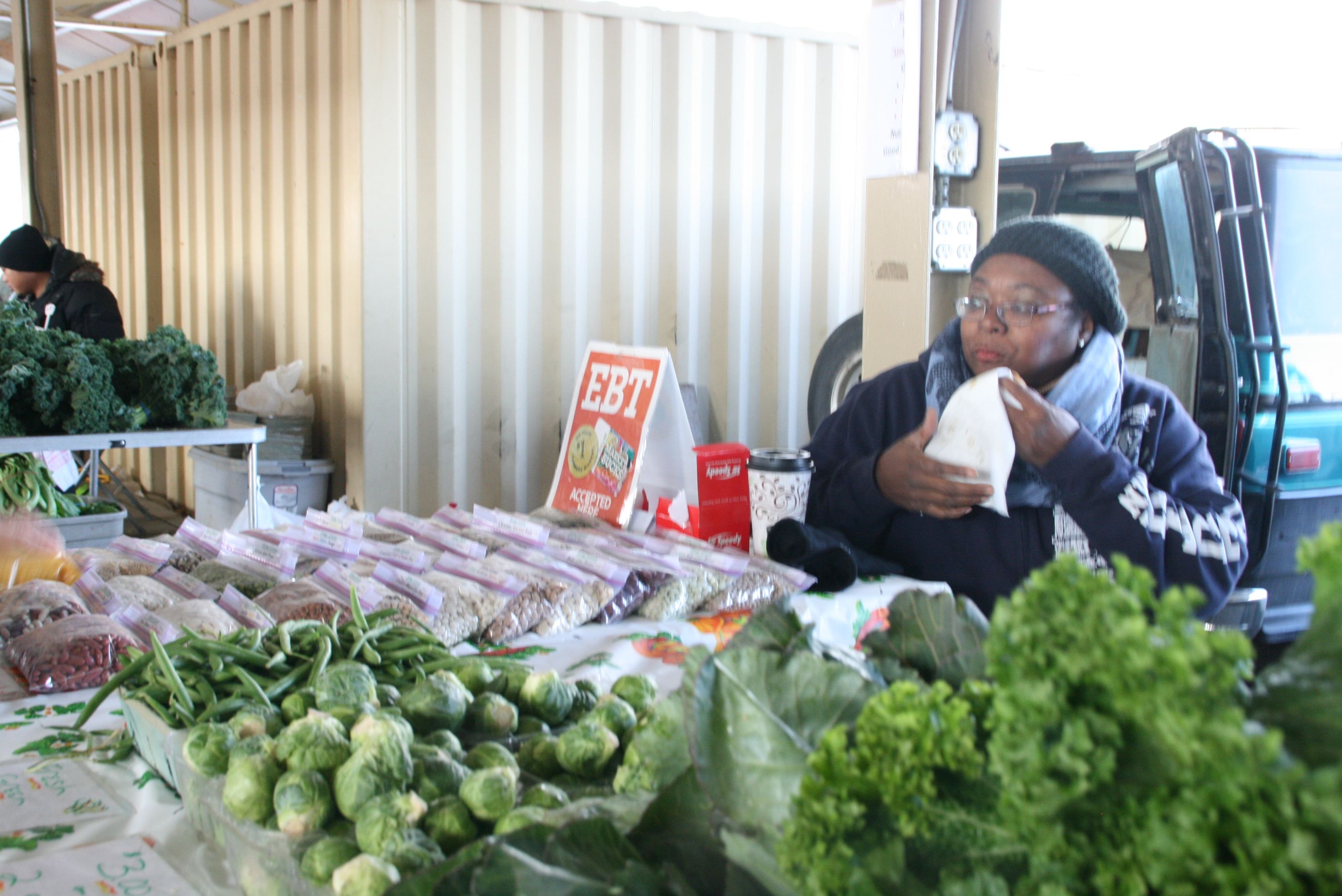 (Photo by Stephanie Fox) Mary Hall packs up an order for another returning customer.

It can be hard to find the fixings to make southern style food up here in the Northstar State, but if you want to cook like those who live at the other end of the Mississippi River, look to Mary Hall. Hall has been selling southern style foodstuffs at the Minneapolis Farmers Market since 2006, when she and her husband Lester inherited their stall from Lester’s father, Bill Hall, one of the few Black farmers in Minnesota. Along with the market stall, Mary Hall inherited a passion for southern style cuisine. She soon expanded the stall’s inventory beyond blueberries and greens to include specialty peas, beans, lentils and rice.

“It surprised me how little people up here knew about southern cooking,” she said. “People would ask, ‘What are these?’ about greens or sweet potatoes.”

Hall is happy to be the teacher, telling anyone who asks about how to prepare exotic ingredients like fresh sweet potatoes, okra, and greens – collard, turnip, mustard and kale. There always seems to be someone at her stand asking questions.

The bags of dried peas, beans and rice include southern recipes. “They’re simple to follow. People come back and say they tried it and now want to buy more,” she said. “There are a lot of northern people who got acquainted with southern cuisine through my little stand at the market.”

“Traditionally, with a lot of southern cuisine, you took your vegetables and threw a ham hock and then you boiled and boiled,” she said. “But, we’re modern and need modern recipes. I taught customers how to sauté green beans in olive oil and garlic. There are quick things that you can do that are healthy but still have that southern feel.”

Recently, some farmers market stands have started selling limited choices of dried beans and peas. Hall carries a couple of dozen kinds, some rare outside the South, like Christmas Beans, Crowder Peas and Butter Beans, winning kudos from food star Andrew Zimmern, who said her stand was best he’d ever seen at a farmers market. She also created rice mixtures and bean mixes, like the Jubilee Rice (a mix of short and medium grain red, brown and sweet brown varieties) Paris Bistro Soup blend (16 different peas, beans and lentils) and an eight-bean blend. “It’s getting cold and this you can use in the winter to make good chili,” Hall said.

The most popular are the Black-eyed Peas, the Red Beans and the Lady Cream Beans. “The Lady Cream Beans have caught on with my customers,” Hall said. “They’re traditional, from Louisiana. They’re also known as Southern Peas – we call them beans but they’re actually peas. We like to eat them over rice.” (These have a slightly sweet flavor and a creamy texture and are a great source of iron, protein and fiber. Some fans suggest serving it with a skillet cornbread.)

Because, unlike most grocery stores, the beans and peas Hall sells are newly harvested dried-on-the-vine. Instead of the usual overnight soaking, most of these dried beans and peas need only a half hour soak before cooking, and are ready to serve after an hour and a half on the stove. They taste better than old beans, too.

Most of what Hall sells come from the family’s farm near Lafayette, LA, a Cajun city on the West Gulf Costal Plain, where winter temperatures in the 60ºs mean that farms can grow crops all year long. The farm has been in the family for a least 30 years – Hall wasn’t quite sure how long – with another farm near Wiggens, MS and a few acres near Princeton, MN dedicated mostly to the sweet blueberries they sell in the spring. What’s needed is shipped north every week for Hall’s customers, some putting in special orders to be picked up the following week.

Hall’s stand at the far north aisle of the Minneapolis Farmers Market has closed until next spring, but everything can be ordered online. If you have any questions about some exotic bean or green or want to order your favorite, she’s open on the Internet all year. Hall’s Family Farm, jacksonhall1365@msn.com.