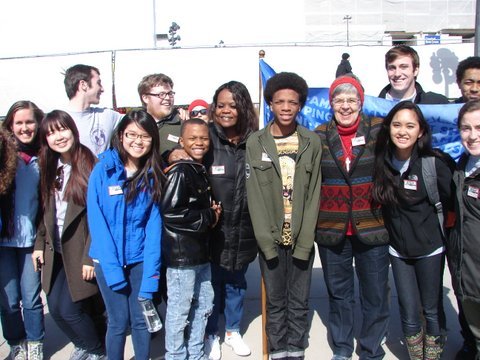 Approximately 1,500 people gathered locally for a march to remember and honor the 1965 Selma civil rights marches and to inspire people to continue to work for equality and justice.

The march was called “Crossing Bridges: Selma to Minnesota.” It symbolically crossed the Cedar Street bridge over I-94. Fifty years ago, the first of three Selma voting rights marches was met with brutal resistance as marchers crossed the Edmund Pettus Bridge. The Rev. Martin Luther King responded by calling on people of all faiths from across the country to come to Selma to support a second march. The third march went from Selma to the Alabama Capitol in Montgomery. The marches played a major role in the passage of the Voting Rights Act of 1965.

The crowd gathered at the Capitol Sunday and walked a half mile down Cedar Street to Central Presbyterian for an interfaith service. It was standing room only in the 1,300-seat capacity church. A broad coalition of faith communities and other groups organized the Sunday march—just as people from many faith traditions rallied to support the Selma marchers 50 years ago following their brutal attack by police. [Full disclosure: I volunteered for this event.]

Dr. Barbara Holmes, president of United Theological Seminary, was one of the main speakers. She had marched in Selma with her father. “We thought the job was done,” she said. “World changing is a generational task.”

Some of the biggest applause came in response to statements from speakers supporting voting rights—the motivation for the original Selma marches. Secretary of State Steve Simon was well received when he told the crowd: “I will do everything in my power to protect, secure, and strengthen our right to vote.”

The biggest response came when he talked about his support for a bill which would give felons—those who have served their time and are now are on parole—the right to vote. Simon also voiced his support “true early voting,” (where the vote goes into the voting machine instead being counted as a separate absentee ballot) and allowing preregistration for 16- and 17-year olds (which would automatically register them to vote when they turned 18.)

The march was different than the recent protests and demonstrations organized by Black Lives Matter. Instead of chanting ‘Hands up Don’t Shoot’, demonstrators sang traditional civil rights standards such as ‘We Shall Overcome’ and ‘Aint Nobody Gonna Turn Me Around’.

People came from around the metro area and beyond. Constance Styles came from north Minneapolis. She is a member of From Death to Life, an organization dedicated to ending violence through healing and reconciliation between families of victims and those who have caused harm. Styles came to the march with friends from the Visitation Sisters, which provides a home base for the organization. She  wanted to participate in the march to remember the historical importance of the events in Selma, and to recognize the importance of all cultures coming together for peace, she said.

Dirk Niles of Zumbrota came with a group from his church, Spirit of Joy in Lakeville. “We are interested in equality, and indicating our support for the struggles that people have been facing for a long time and continue to face,” he said.

Lisa Garcia and Shelley Hickman participated because they said they believed that marches still make a difference. Garcia and Hickman are doing more than just marching for civil rights. They said they belong to a weekly dialogue circle that includes St. Paul Police, community members, and youth at Boys Totem Town, a residential facility for juveniles found delinquent. “We want the police to put a face to the young black men who are being killed,” Garcia said. They both believe the circle is making a positive difference.

At the Sunday interfaith service, Holmes recalled the taunts, intimidation and fear tactics the Klan used against the marchers. She remembered her father watching the rooftops for snipers.

She said the torch was being passed to the next generation: “Your fight is new,” she said. “Your struggle is the same.”

Rabbi Spilker told the crowd at Central Presbyterian that we “need to face the injustices in our justice system,” and the most important thing is not to be afraid. “We crossed the Edmund Pettus Bridge—we will cross many others. May this be God’s will and ours.”