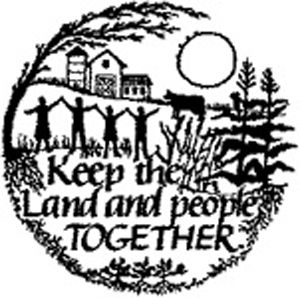 The Land Stewardship Project (LSP) is a private, nonprofit organization founded in 1982 to foster an ethic of stewardship for farmland, to promote sustainable agriculture and to develop sustainable communities.

“The land belongs to itself. If anything we belong to it…we borrow our lives from it.” Planting in the Dust

More than 25 years ago, I drove around Minnesota with Laura Clark, as she performed “Planting in the Dust.” The play, written by Nancy Paddock, focused on a young couple at the beginning of their career struggling with an ethical dilemma: whether to adopt agricultural conservation practices that would preserve the land, but at the risk of losing money needed to keep the farm.

The play was an early production of the Land Stewardship project, a focus on agricultural ethics and conservation. This weekend — March 22 and 23 — a new play by Land Stewardship organizer Doug Nopar focuses on an ethical dilemma faced by farmers at the end of their career: whether to get top dollar for the farm and ensure their own financial security, or take less money  and help the next generation get started farming for the sake of the community.

“Look Who’s Knockin'” is a one-act play, intentionally short enough to allow time for discussion afterwards, and structured to invite conversation. According to the Winona Daily News:

“I tried not to clobber people with my own and my organization’s perspective,” Nopar said, adding that farmers who take top-dollar offers to provide for their own future and for their families’ often act out of genuine concerns and laudable motives.

In the 1980s, a lot of people lost their farms after a round of high crop prices and land speculation drove prices unsustainably high. Today another land price bubble has prices in some parts of MInnesota going from $5,000 to $8,000 or even $10,000 an acre. That puts land out of reach for beginning farmers who don’t have a family connection to the land.

Helping to get beginning farmers connected with the land is one of the Land Stewardship Project’s priorities:

Farming affects all of us, not just farmers. If you want to join the discussion, you can see “Look Who’s Knockin'” March 22 and March 23 at St. Catherine University Recital Hall (2004 Randolph Avenue, St. Paul). Both performances begin at 7 p.m., and will be followed by an audience discussion centered on the issues raised by the play. The cost is $10, payable at the door. Click here for the March 22 performance or here for the March 23 performance or contact LSP’s Amy Bacigalupo at 320-269-2105.