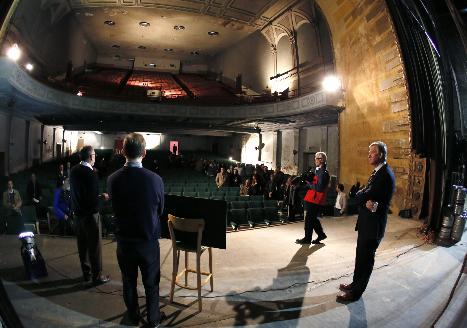 Ever since Mayor Chris Coleman introduced his 2015 budget in August, I’ve been anxious to learn more about the details of the Mayor’s proposal for a new $42.5 million “8-80 Vitality Fund”. Last week a list of projects were posted online in preparation for the City Council’s October 8th budget review session. I shared the list with streets.mn readers in my post, “Saint Paul’s 8-80 Vitality Fund Can Help Saint Paul Work for Everyone” (October 7, 2014). But I still had a lot of questions about the details, so I headed down to City Hall to listen in on the Council discussion. The majority of the time was spent reviewing the Palace Theater renovation project and the newly prepared list of projects to be funded with the remaining $9.5M

Jonathan Sage-Martinson, Director of Planning and Economic Development, introduced the 8-80 proposal by outlining the purpose of the fund, “to promote economic development by increasing activity and vitality on our streets and public spaces throughout the City of Saint Paul.”

Next up was Joe Spencer, Director of Arts and Culture, who presented plans for renovation of the Palace Theater in downtown St Paul, using $8M of the 8-80 Vitality Fund. He acknowledged that he’s passionate about this project and has been working to bring it to fruition for many years. He sees it as a game-changer for downtown Saint Paul, which does not currently have much activity of interest to young professionals in their twenties and thirties. 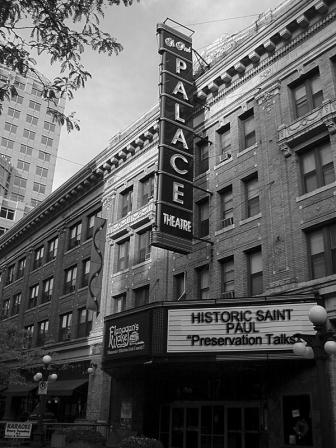 The current plan is for the City to own the theater and lease it to a private company to program and manage the operations. City staff has been negotiating with an experienced team of venue operators made up of Jam Productions, which owns and operates several historic theaters in Chicago and in the Twin Cities, including the Turf Club in St Paul, and First Avenue, which puts on far more shows each year in the Twin Cities than any other promoter. According to Joe Spencer, the City should be able to recover from $4 million to all $8 million of its investment over a 20 year period.

Council members generally agreed that a newly renovated Palace Theater, with programming designed to attract millennials, would enliven the downtown after dark and help secure Saint Paul’s growing reputation as a great place for millennials to call home. However, they questioned whether the project was a good fit for the 8-80 Vitality Fund which is designed to focus on creating safe, pleasant, lively streets and public spaces that work for everyone from eight to eighty. They suggested instead that this project is a perfect fit for a Cultural Star grant, and recommended that the planners look into that option.

Having spent almost an hour discussing the Palace Theater, the Council moved quickly through the other proposed projects. The $8M slated for the Downtown Bike Loop engendered the most discussion, as Jonathan Sage-Martinson discussed the rationale for building just one of four legs of the loop. Jackson Street was chosen as the first off-street bikeway to be built, he explained, because most everyone agrees it is the best north-south route to the east of downtown. However, knowing that it will be important to have a complete loop for people to ride downtown, $450,000 of 8-80 funds will be designated to paint temporary off-street bike lanes on three additional streets. This funding will come from the $9.5M funds set aside for a variety of 8-80 streets and public spaces, but not previously assigned to particular projects.

Other projects to be included in the $9.5M ‘8-80 Streets and Public Spaces’ funding include:

One final important question was raised by Council member Dai Thao at the end of the session, but was not answered: “If a Cultural Star grant is used to fund the Palace Theater renovation, would that mean there is an additional $8M available in the 8-80 Vitality Fund for other projects?”

As I left City Hall, I began thinking of the many ways that an extra $8 million could help move Saint Paul toward a more livable 8-80 city. Could the bold statement put forward by the Mayor with his $42.5M 8-80 Vitality Fund turn out to be even more powerful? Or would the 8-80 fund be reduced by $8M, to $34.5M instead?

In an attempt to find an answer to that question, I e-mailed Jonathan Sage-Martinson to ask him. He, in turn, passed my question on to his colleague Tonya Tennessen, who responded: “In terms of what Council has in mind for the total fund amount, you’ll want to inquire with them directly as this is their proposal.” I intend to do just that…and encourage others to do the same.

Anne White lives in the Merriam Park neighborhood of Saint Paul. She is currently the Land Use Chair for the Union Park District Council (District 13) and serves on the Governing Council of the District Councils Collaborative of Saint Paul and Minneapolis (DCC). After moving to the Twin Cities in 2003, she retired from her work as a professional photographer and began working to ensure that community concerns were fully considered in planning for the Green Line LRT. Now that the line is up and running, including stations at Hamline, Victoria and Western, her main focus is on walkability, making sure that people of all ages and levels of mobility have safe, pleasant walking routes to LRT and other destinations. She was recently appointed to the St Paul Transportation Committee of the Planning Commission as the Active Living community representative.