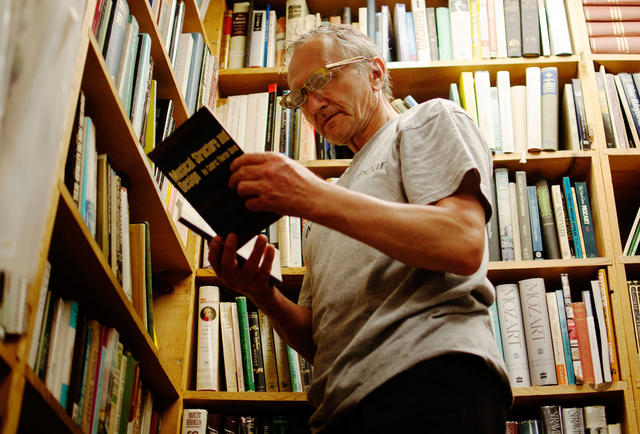 Continuing education student Stefan Gherghelegiu browses through books Tuesday, May 7, 2013, at the Book House in Dinkytown. (Photo by Ichigo Takikawa)

Entering Dinkytown’s the Book House is like entering a maze.

Follow the bend of ceiling-high bookshelves and there’s a corner table with a book on hair in African art and another one with 3-D landscapes of Israel.

Soon, the Book House and its estimated 60,000 volumes will be packed up and moved to a new home in Prospect Park.

After 37 years of business, the used book store will need to relocate for a new student housing project developed by the Opus Group to take its place.

According to owner Kristen Eide-Tollefson, lawyers from the development company told the Book House it would have 10 days and $2,500 to move out when they take possession of the property.

“We are going to have to move before we even know if they’re going to get their permit,” she said. “It’s a predicament.”

Matt Rauenhorst of Opus said the company will need to wait until the city approves its plans before it can move tenants out. He declined to comment on any agreements with the Book House.

Opus hasn’t begun looking to fill the retail on the ground floor of the project yet, he said.

“We still haven’t gone out and started soliciting for those retail spaces at this point,” he said. “We don’t want to be too far out in front of it.”

“I remember thinking this was the strangest but coolest store,” she said. “… To me it was such a staple of campus life — I’m sad that future students aren’t going to get that.”

Employee Kevin Sell said he and others at the store have been searching for a new location in Dinkytown to no avail for the past two months.

“If we stay in Dinkytown, we have to go to a lower level and a smaller space, and that’s something that is not our favorite option,” Eide-Tollefson said.

She said she was also interested in a vacant storefront on 14th Avenue but was dismayed when she discovered the apartment complex across the street was planning to use it as a rental office.

“They’re not just doing their project, they’re taking retail space, and we need to relocate,” she said. “So that was hard to deal with.”

Instead, Sell said the business is in the process of signing a lease with a storefront along University Avenue just past Stadium Village.

That new location, he said, is likely to be a permanent one.

“The prices that they’re asking right now for this [current] building are just exorbitant — double what we pay now,” he said. “We can’t afford that.”

Soon, employees will begin to pack away the thousands of books, all while making sure they can keep their online sales through Amazon during their move.

Employee Ryan Hinderaker said maintaining online sales is essential, since they account for close to half of the store’s business.

Beginning that process so early, Sell said, is a disappointing but necessary next step.

“A month would be difficult but doable,” he said. “10 days is completely unrealistic.”

Hinderaker said the move itself could be beneficial to the business by allowing it to reorganize its inventory.
It could also be a chance to grow in other ways, he said, while maintaining the business’
traditions.

“You have to look at it as an opportunity to do things differently,” he said. “There’s going to be a lot of stuff moved and changed, but a lot of it, even more, will be the same.”

Wisniewski said she’ll probably visit less frequently with the new location; other students too, she said, are less likely to travel farther to get to the store.

“I think it’s going to have to start a new loyalty … and rebuild
clientele,” she said.

Sell said after the recent months of uncertainty since the Opus project was proposed, it might be time for the store, its employees and its customers to look forward.

“We’ve been living in uncertainty for three months … it’s kind of a frustrating way to work and live,” he said. “Part of us is excited for the future — starting at a new location may be just what we need.”