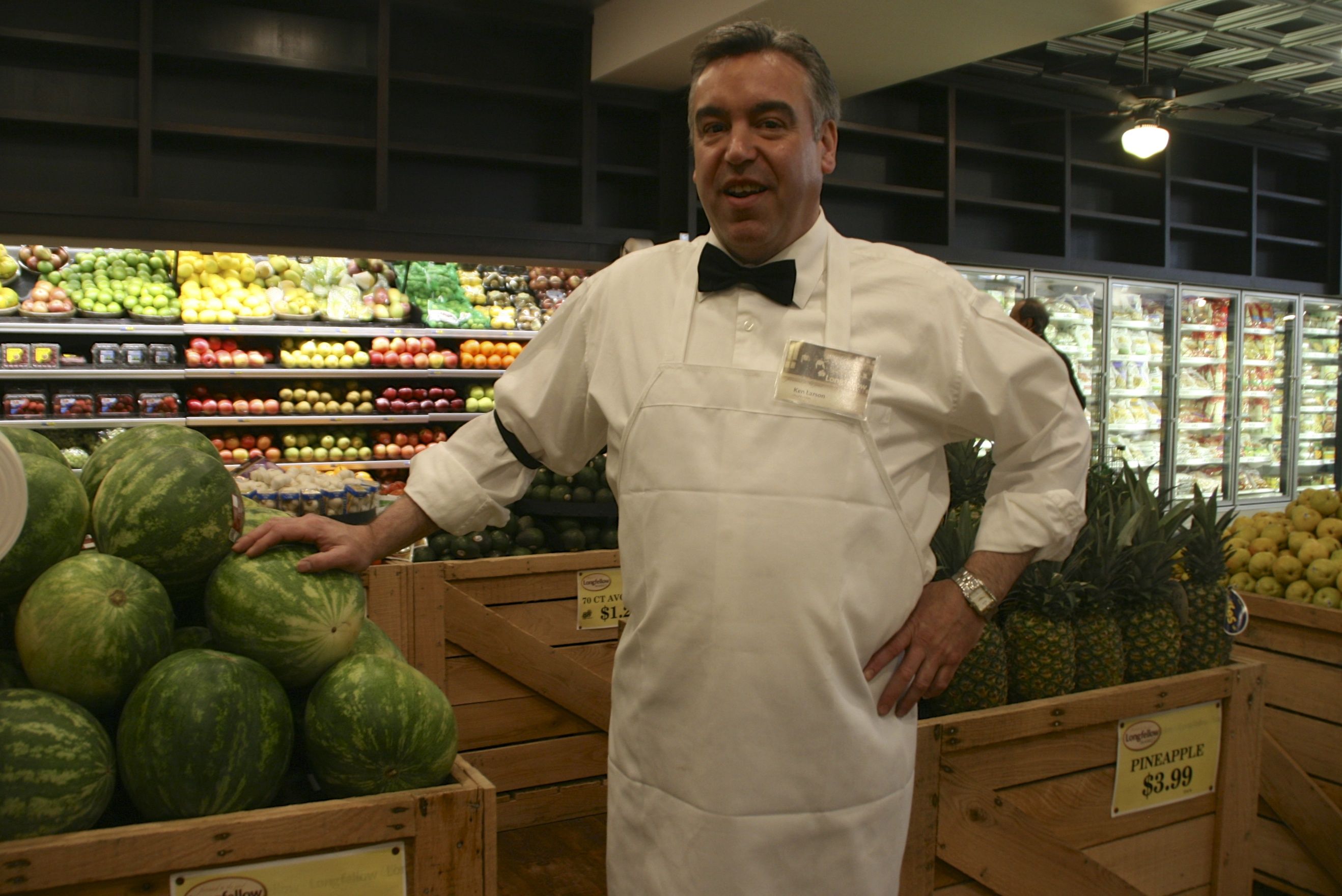 The owner of the new Longfellow Market on Minneapolis’ Lake Street hopes to offer neighborhood shoppers an anti-Cub Foods experience. Instead of a warehouse sized self-service store, proprietor Joel Ahlstrom and shopkeeper Ken Larson (they prefer the terms to ‘owner’ and  ‘general manager’) want to offer customers a full service neighborhood food market with a knowledgeable staff committed to assisting customers and a product mix based on what local customers crave.

The store, at 3754 E. Lake Street joins other quirky, neighborhood-friendly businesses like the Blue Moon Coffee Café and Hymie’s Records, both across the street. While Longfellow is not a grocery desert, there are few full service groceries in this part of Minneapolis. The store had a soft opening on April 14, creating a lot of buzz in the close-knit Longfellow neighborhood.

When large supermarkets first became the norm in the 1930s, (they were invented in 1916), the concept turned food shopping into a completely self-service experience. Recent trends toward all-inclusive hypermarkets and large national chains have made the grocery buying experience even more automatic.

This new supermarket is a located in what once was Peterson’s Motors, a car dealership in the 1920s. The building later housed GC Peterson Machinery, a supplier of woodworking and plastics machinery, tooling, and supplies.

Architect Mike Mularoni, who oversaw the remodeling, found a row of the original windows bricked up behind the building’s old walls, dating from the building’s early days. The period windows bring an abundance of natural light into the front of the store, near the checkout lanes. Fresh vegetables and a cheese section sit in the back of the store and a full deli lines the east wall. There’s a large selection of bulk items, grocery items and frozen foods. When the weather warms, the owners promise, customers can look for bike racks outside the store. There’s plenty of parking, too, in the lot or in front on Lake Street.

The 1920s connection inspired Ahlstrom and Larson to go with an old-fashioned theme. Employees wear white shirts with sleeve garters and bowties. Music of the 1920s plays on the speakers overhead. “I was afraid that it would get annoying, but everyone likes it,” Ahlstrom said. Some time this year, the plan is to bring in barbershop quartets and cheese making and butter churning demonstrations. “People don’t know how butter is made anymore,” he said, “so this will be a chance for them to find out.”

Larson said he hopes that his store will attract customers who want a different shopping experience. The plan is for the Longfellow market to be customer-driven instead of corporate-driven. “We’re a work in progress,” he said. “We’ve been open not quite four days and already we’ve gotten 247 ideas for products from people. We’re listening to what people want. We’ve been getting a ton of requests for products, things I’ve never heard of, like unsweetened organic soy milk. But, we’ll be ordering it. If there’s an item we don’t have, I’ll get it.”

The store is already adjusting the produce selection from a 30/70 percent organic to non-organic mix to 60 percent organic because of customer demand. They are planning to bring in a greater mix of products, especially Minnesota-made foods.

They’ve also hired specialists like Mary Lou, a foreign cheese expert who has been in the business for more than 20 years. “We’re trying to cover every European country’s cheese,” she said. The deli features items like chicken potpie, cheesecake, crumpets and ready to go sandwiches made in the market’s kitchen, as well as smoked brats and sausage from the store’s own smokehouse. “We do our own recipes,” said Larson. “We’ve hoping to have something new every day.”

Plans are underway for an official grand opening for Longfellow Market later this spring. Check their Facebook page for more information.

Fresh brats and other prepared meats are made in the store's smokehouse.

The deli has what you need, freshly made.

Open fewer than four days in this photo, the market is already busy.

'Forward to the past' is the store's motto.

The newly opened Longfellow market is located int he 3700 block of Lake Street.