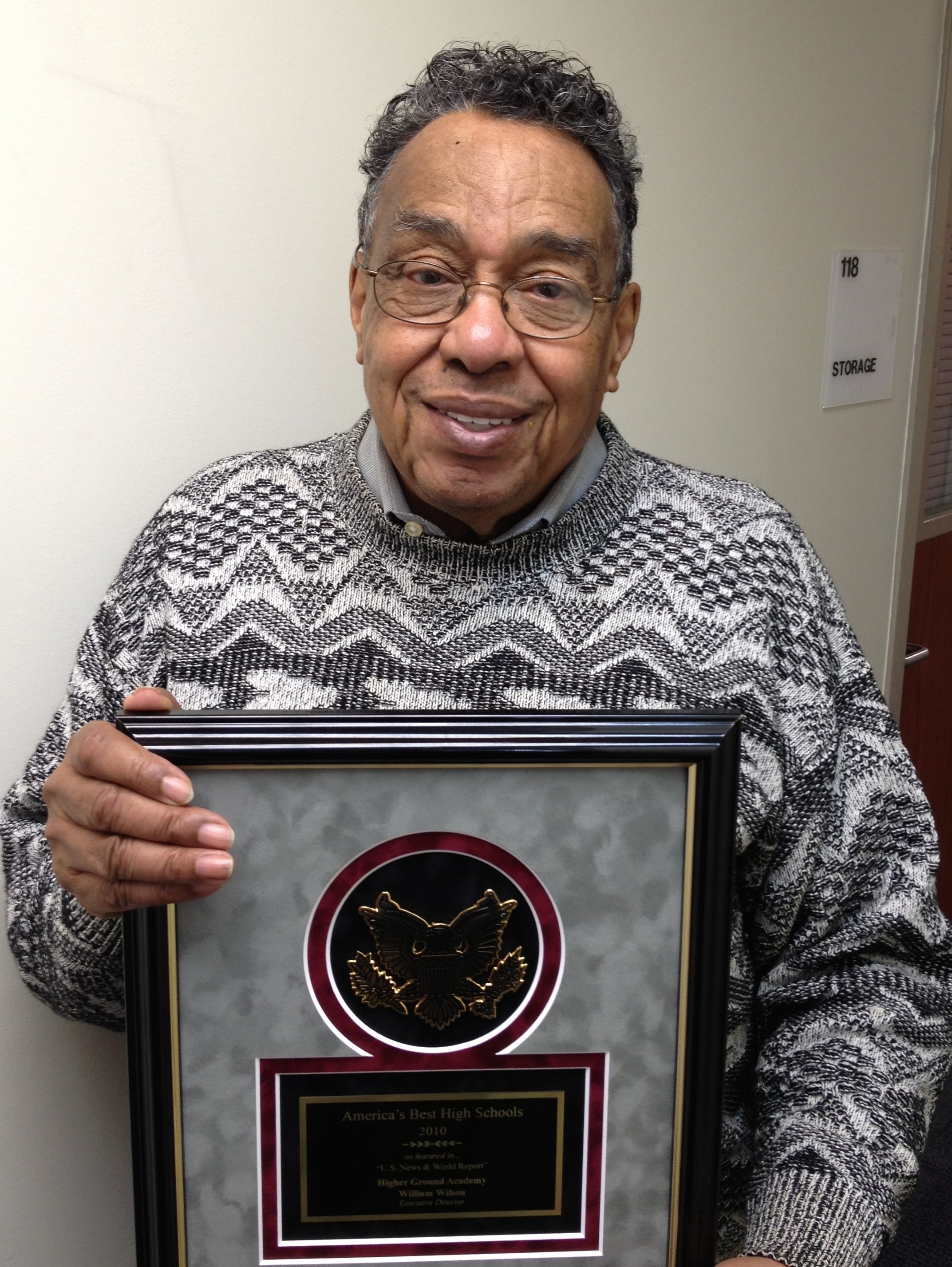 Below is Bill Wilson’s Minnesota Senate testimony from earlier this year.  Bill is the first African American to be elected to the St. Paul City Council, the first to be elected City Council Chair.  Later he was appointed Commissioner of the Minnesota Department of Human RIghts by (DFL) Governor Wendell Anderson.

Higher Ground Academy, the k-12 charter that Wilson founded and now serves as Executive Director has just been named for the fourth time by US News & World Report as one of the nation’s and Minnesota’s best public high schools, using several measures.  This month, US News rated the school as the best public high school in Minneapolis or St. Paul and one of the twenty top public high schools in Minnesota.
Wilson is pictured above holding one of the awards from US News and World Report. The Star Tribune has repeatedly named Higher Ground Academy as one of the top “Beat the Odds” public schools in the Twin Cities.  HGA’s student boyd is 100% African American and about 70% of the students come from low income families.  His testimony appears below. (Note – the CSC office is located at HGA as a way to share space and help us learn from HGA, as well as other district and charter public schools).
Joe Nathan

Remarks by Bill Wilson before the Minnesota Senate Education Committee

Madam Chair and members of the committee, I am Bill Wilson, Executive Director of Higher Ground Academy charter school, and I appreciate the opportunity to testify today.  Given the lateness of the hour with only a couple of minutes remaining for testimony, I will set aside my prepared remarks.  I feel compelled to comment on some earlier testimony that I believe to be misleading; particularly, testimony charging charter school with resegregating our public schools.  Painfully, public schools were legally segregated by government imposition from the inception of public schools which was ended in 1954 by the U.S. Supreme Court.  Segregation being defined as when children of color could only attend schools that were designated for them based solely on the color of their skin. The Supreme Court ruled that in such instances, separate and equal is never equal.

Charter schools must by law admit students on the basis of a family decision – not a government imposition.  The fact that a charter school may enroll a very high percentage of one ethnic group or another, does not fit the definition of segregation.  It’s far different than what I experienced as a child when our family was told where to send me.

As a child growing up in southern Indiana, I know far too well what segregated schools were because I was bussed past three (3) all white schools in order to attend the one school designated for children of color.  The pseudo segregation arguments that are typically advanced by the Institute on Metropolitan Opportunity at hearings like this, serves little more than an exercise in academic distractions from the primary causal issues of societal segregation such as income inequality, lack of affordable housing, the systemic under education of students of color and under education of students from lower income households regardless of color.  Clearly, given the horrendous education gap between white and black students in our state, more attention needs to be placed on education at this time and less on spurious arguments about segregation.

Education is still the most reliable vehicle through which a  person can constructively improve their life’s chances.  In most instances, a quality education helps leverage a higher quality of life, which is more critical today than ever before. It is often said that a child has no choice in the circumstances when entering this world but, through quality education, they can in many instances shape, mold and determine their future.

Based on studies recently released by the Brookings Institute, some 75-80% of all new jobs that will be created in the Minnesota Metropolitan area will require a workforce with skills sets normally acquired through at least two years of post-secondary study.  Unfortunately, our K – 12 education system is not adequately preparing many of our students for this reality and in the case of minority and especially black students, as is evidenced by results of the Minnesota Comprehensive Assessment of Proficiency in areas of Reading and Math.  When we average MCA proficiency scores between 2009 and 2013 for St. Paul and Minneapolis district schools, black students had a proficiency in Reading of 37% and a corresponding proficiency in Math of 28%.  Accepting that there is a correlation in Reading and Math proficiencies and acceptance into post secondary institutions, it is reasonable to conclude that a disproportionate number of black students will not be able to access admission into Minnesota post secondary institutions. And in the absence of being able to acquire the requisite training and skills provided by 2 and 4-year post secondary education institution, these students will most likely be excluded from the 21st century job opportunities that are being created in the new Minnesota economy.

Clearly, education is in the enviable position of being a major driving force for the production of a diverse and robust workforce capable of meeting the demands of our growing technology based workforce. Clearly, more and better education remains the unrelenting challenge of both district and charter schools.