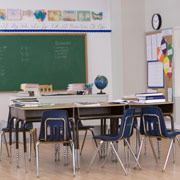 This is a big country, and each state comes with its own personality and general ideological bent. Sometimes, that allows those of us in Minnesota to see the future. The current fights we’re having about seniority and teacher evaluation were first fought elsewhere. While charter schools started here, the notion of making them quasi-private competitors with traditional public schools picked up steam elsewhere. And now we can see the warning signs of the big fight that’s probably a few years off yet: Vouchers.

Voucher programs that use public money to fund private education were first proposed in the U.S. decades ago, and the basic idea is generally attributed to Milton Friedman. To the right, vouchers represent the best of outcomes – replacing a far-reaching public institution with a private market – but they have until recently been a political nonstarter.

Sure, there have been test programs in Milwaukee and Cleveland, and it’s true that the constitutional issues around state support for religion have been cleared off the table in response to such programs. In most places, however, vouchers remained a distant threat for progressives and a fragile dream for conservatives.

We don’t live in those times anymore. As Chester Finn notes in a decidedly pro-voucher column for Education Next, Indiana and Ohio have both adopted statewide voucher programs, voucher-like “scholarships” have taken root in a few other states, and Louisiana just cleared the way for vouchers to come to the bayou.

Minnesota probably won’t be in the next round of states to consider vouchers, but you can bet we’ve got people here waiting for the fight. Let another half dozen states adopt voucher programs, and we’ll start seeing more pressure for it here.

Never mind that vouchers don’t work. Twenty years of vouchers in Milwaukee have produced a set of private schools that aren’t any better than the public schools (both charter and traditional). Vouchers flood existing private schools with more students than they have seats, and the excess demand is too often taken up by profiteering “entrepreneurs” who are happy to take public money in exchange for providing a mediocre school.

Public support for education should encourage equity. If competitive markets don’t provide equity in material needs like food and housing, why should we expect them to do so in education? We’d better get ready to fight on this.