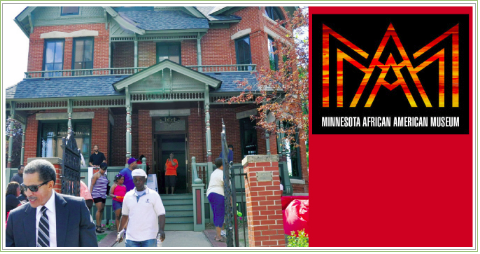 Roxanne Givens’ dream of a Black museum finally became a reality as the Minnesota African American Museum (MAAM) was formally dedicated last weekend. Those present for the ceremony agreed they were sharing a momentous occasion.

“When Roxanne had the epiphany, I was just as excited as she was,” says Judie Carmichael Brown of the museum’s founder and acting director. Brown, herself a founding board member and public relations chair, told the MSR that an estimated 200 persons attended last Friday’s three-hour event at the former Coe mansion, which the museum board acquired in 2008, located at the corner of 3rd Avenue and 18th Street South.

Master of ceremonies T. Mychael Rambo called the event the “Who’s Who of everybody,” including as it did local and national politicians, business leaders and community folk. It was blessed by four local ministers: Bishop Richard Howell (Shiloh Temple), Rev. Dr. Mildred Cox (St. Mark’s Cathedral), Rev. Earl Miller (Progressive Baptist), and Rev. Joseph Baring (St. James AME, St. Paul). Each, according to Rambo, represented one of the “four winds.”

“I believe that God always has intervened into our history,” says Baring. “We were always a religious people, even in Africa when we were brought here. [Black people] did great things with very little. I think if we look back at the past, we can see the future.” 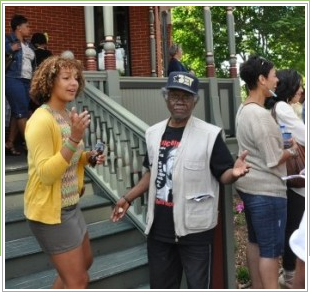 Then Rambo asked everyone present to create a human circle around the entire mansion for the ceremonial ribbon cutting. “It was amazing,” he remarked afterwards.

State Representative Karen Clark read a letter from Minnesota Gov. Mark Dayton, who wrote, “The museum will be a precious resource to the city and the state.”

The MAAM “means more than a structure,” says State Representative Bobby Joe Champion. State Senator Jeff Hayden noted how proud he is to have it in his district.

Ellison, Champion and Hayden spoke further to the MSR after the ceremony.

“When Roxanne initially started looking at the place, she brought me over here,” recalls Champion. “I was instrumental in getting Keith Ellison to come over, and then Rep. Hayden and Karen Clark came over. It was our collective work and our vision together.”

Ellison adds that he later secured a $400,000 “federal earmark” from Washington.

“I’m so extremely proud of Roxanne and the Givens family,” says Hayden. “They are an institutional family like my family and have been here for a long time.”

Givens thanked everyone who has been involved with the project from beginning to now. “This museum is your museum. I couldn’t be more proud,” she declared.

“I do whatever Ms. Givens needs for me to do,” says MAAM Marketing Coordinator Shavonne Johnson. “Whatever she needs done, we help to get done.”

“It hasn’t been easy, and the struggle isn’t over. [But] I’m very proud of Roxanne,” adds Minnesota Black Chamber of Commerce President Lea Hargett. 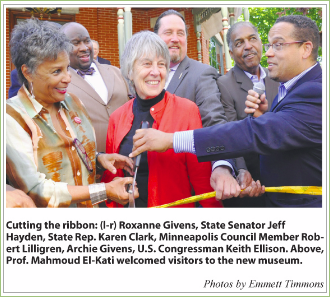 “I grew up in the Minneapolis schools, and we lack this education,” says Howell. “We need to know more about our culture.”

“I think it will give people a taste of things to come,” says Brown on “Bringing It Home,” the museum’s inaugural exhibit on Black baseball in Minnesota.

“Roxanne approached me about having my exhibit [as] a part of this,” recalls curator Frank White. “Baseball is a woven fabric of our community here in Minneapolis and St. Paul,” he points out, adding that watching baseball “was the social thing to do” for the Black citizens at the time.

“It opened my eyes — we [Blacks] are everywhere and have been for quite some time,” says Glenn. “It’s unfortunate that a lot of us don’t know that.”

“I felt almost like the spirits were in the room,” notes Hargett. “It’s a beautiful experience and a beautiful environment. I loved it.”

“I really like it,” agreed local nurse Qamar Hassan.

When fully completed — Givens told the MSR that at least $1.5 million still is needed “to finish the remaining [two] stories” of the museum — two exhibits will be added: a permanent one on the first Black settlers in Minnesota, and one on the relationship between Blacks and Native Americans, as well as a third-floor children’s literary section. She proudly adds that both a Black architect and a Black developer were used to build the Black museum “by us and for us.”

El-Kati believes the MAAM is important “to keep our memories intact.”

“This is something very important and will serve our community for years to come,” says Rashid Omar of Minneapolis.

Kimberly Purifoy of Maple Grove says that the MAAM is “long overdue.”

“It is so good to be able to bring kids to a safe place where they can learn more about African American contributions to this great country,” says Champion. “Not just around music, but around engineering, great inventors, sports and medicine. I’m very excited about it.”

“As a fifth-generation Minnesotan, all I can say is, ‘Black is back,’” adds Robin Hickman of St. Paul.

The Black community must support the MAAM, Ellison emphasized. “We must help [Givens] make it successful. If this institution is not wonderful in 50 years, it would not be a reflection on Roxanne, but on us.”