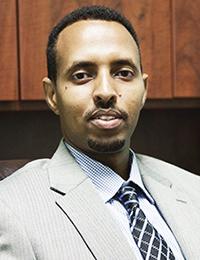 Abdinasir Abdulahi is now an established immigration attorney, with his Minneapolis law firm, Abdinasir M. Abdulahi, LLC, having become a destination for thousands of East African immigrant clients throughout Minnesota and other states.

“People feel comfortable coming to me with questions that they wouldn’t necessarily bring up to other lawyers,” he said. “That’s because they don’t know the legal system, and they need someone they can relate to, someone they can trust.”

Over the past four years, Abdulahi has earned the trust of many Minnesotans from East Africa through his various legal services. But his path to that success was anything but easy.

Abdulahi was born and raised in Kalafo, Ethiopia, part of a region that has long been the source of conflict between Somalia and Ethiopia. Coming of age in this small border town, some of those conflicts unfolded before his eyes.

Yet despite growing up amid political conflicts and never-ending tensions between the two countries, Abdulahi was always hungry for success. Initially, he was interested in becoming an economist, but the scores he got from the national university placement exam didn’t qualify him to study the subject. “It’s not like here where you plan your own field of education,” he said. “In Ethiopia, you sit for a national test, and then based on the grades you get, you could end up in any field, whether you like it or not.”

So law it was. At first, Abdulahi wasn’t happy with studying the field. But it only took him a few courses before he started to develop a deep interest.

After graduating from law school in Addis Ababa, Ethiopia, when he was in his 20s, Abdulahi was appointed to become judge of a Kalafo court. Four months later, he was promoted to the region’s chief justice of the state.

Abdulahi wasn’t the chief justice he wished to be, however. Government officials gave him orders on how to handle cases — orders he had to follow or face harsh consequences. “I was the chief of justice of the entire state,” he said. “I had the same power as the governor, but I could barely do anything. I wasn’t independent.”

So Abdulahi decided to pursue opportunities elsewhere. He had enjoyed the legal service and courtrooms. But he also wanted to do what he felt was the right thing — he hated to answer to government officials and base his decisions on their will.

In 2001, an opportunity presented itself: The Ethiopian government sent Abdulahi to the United States for a law seminar. He would be among judges and prosecutors from more than 20 countries around the world.

When he landed in the United States, though, Abdulahi didn’t go to the conference. He requested asylum.

Six months after his arrival in the United States, Abdulahi was granted asylum. He delighted to have been granted the protection, but the transition process was a challenge. “It was really difficult,” he said. “One day you’re an official of a state. And the next day, you’re trying to find where to live and what to do. You don’t even know how to find your way around.”

Despite his experience in the law field, Abdulahi ended up working at Wells Fargo, where he did filing and other miscellaneous duties. He split his paycheck between himself and his family in Africa. “Life was tough at the time,” Abdulahi said. “But at least, I was happy mentally and emotionally.”

One thing was clear to Abdulahi: facing shelves and files every morning wasn’t something he wanted to do forever. And since his law degree from Addis Ababa and experience couldn’t translate into a decent job in Minnesota, he knew he had to go back to school.

So in 2002, Abdulahi attended the University of Minnesota Law School, completing a yearlong Master of Laws program. A year later, he transferred to William Mitchell College of Law so that he could work and go to law school full-time.

Abdulahi graduated from law school in 2009. A year later, after passing the bar exam, he opened his own law firm.

Four years later, AMA stands on Franklin Avenue and 11th Street, and its three attorneys serve thousands of people — mostly immigrants — throughout Minnesota and other states.

Abdulahi is one of a few people in the East African community who are practicing attorneys, an example of success and inspiration. But when Abdulahi goes to some courts to represent clients, judges don’t often recognize him as a lawyer, he said. “Somalis or even other [minority groups] were not used to being attorneys,” Abdulahi said. “They would ask me, ‘Are you the interpreter?’”

Despite such remarks, Abdulahi keeps a positive attitude, which he said has contributed to his success. “We’re blessed in America and also in the state of Minnesota,” he said. “It’s no accident that a lot of Somalis are here; a lot of East Africans are here.”

“This country offers many opportunities,” he said. “I’m a lawyer now. I was blessed to be a member of the Bar, which is highly regulated. My peers and other members of the Bar were really helpful. Without them, I wouldn’t do it. There are people who would disappoint you. But there are many others who would accept and support of you.”